The first two charts show the evolution of filibusters by presidential administration. As you can see, their use rose steadily through the ’80s and then leveled off starting around 1990. Democrats mainly kept things pretty stable throughout the Bush administration, with the number increasing only when Republicans lost the 2006 midterm elections and became the minority party. At that point, they ratcheted up the use of filibusters to record levels, and there was no honeymoon when Obama won the presidency, not even for a minute. Republicans went into full-bore filibuster mode the day he took office, and they’ve kept it up ever since. For all practical purposes, anything more controversial than renaming a post office has required 60 votes during the entire Obama presidency. 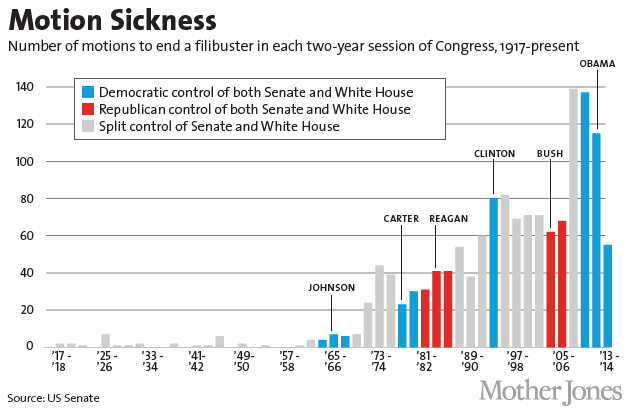 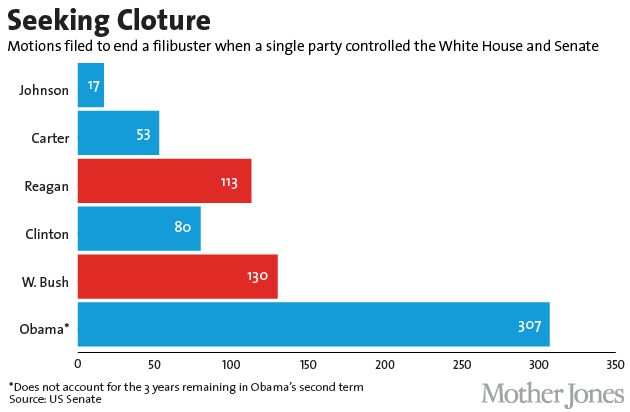 But it was Republican filibusters of judicial and executive-branch nominees that finally drove Democrats to act on Thursday. Democrats had struck one deal after another with Republicans to try and rein in their abuse of the filibuster, but nothing worked. A few nominees would get through, and then another batch would promptly get filibustered. The chart below tells the tale. Under George Bush, Democrats mounted filibusters on 38 of his nominees. That’s about five per year. Under Obama, Republicans have filibustered an average of 16 nominees per year. 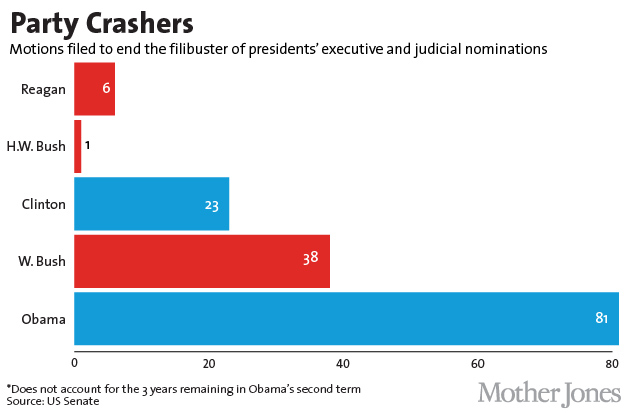 The last straw came when Republicans announced their intention to filibuster all of Obama’s nominees to the DC circuit court simply because they didn’t want a Democratic president to be able to fill any more vacancies. At that point, even moderate Democrats had finally had enough. For all practical purposes, Republicans had declared war on Obama’s very legitimacy as president, forbidding him from carrying out a core constitutional duty. Begging and pleading and cutting deals was no longer on the table. Eliminating the filibuster for judicial and executive branch nominees was the only option left, and on Thursday that’s what Democrats finally did.

UPDATE: Some edits made to the passage about Republicans losing control of Congress in 2006, to clear up exactly who was filibustering during the 2008-08 period.