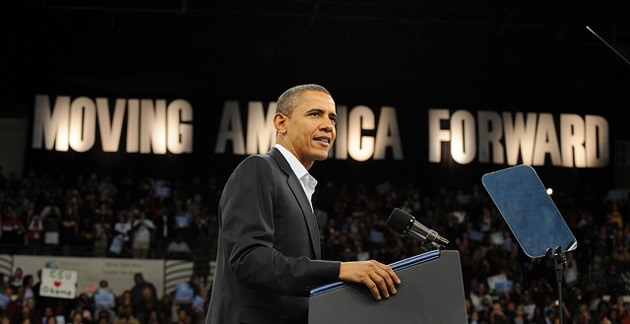 The punditocracy seems to be in agreement: Barack Obama can’t just run a negative campaign designed to eke out a slim victory over a bruised and ultimately punch-drunk Mitt Romney. He also needs to offer a vision. But what? David Brooks offers three alternatives:

It’s discouraging that none of these seem remotely feasible. Global warming is unquestionably the most important item on these lists, but a serious climate change bill couldn’t even get close to passing two years ago, when Democrats had a big majority in the Senate. There’s no plausible argument that Obama could succeed on this front during a second term any more than King Canute could keep the tide from coming in. (An unfortunately apt analogy.)

So how about fixing broken capitalism? It’s not clear to me that Obama thinks capitalism is seriously broken, so that seems pretty unlikely. Campaign finance reform? Liberals have been dashing themselves against the shoals of CFR for four decades now, and have failed utterly. In fact, they’ve not only made no progress, but things are arguably quite a bit worse today than they were when the CFR battles started. What’s more, recent Supreme Court decisions have considerably narrowed the scope of what Congress could do even if it wanted to.

So that leaves deficit reduction and tax reform. Obama, as near as I can tell, really does think long-term deficit reduction is important. His otherwise inexplicable behavior during the debt ceiling showdown certainly suggests that he takes it seriously. But there’s a reason his efforts last year failed: He won’t accept a package without tax increases and Republicans won’t accept one with tax increases. I have no reason to think that either side is going to budge on this.

So that leaves tax reform. This has the virtue of not being flat-out impossible. Unfortunately, it has the drawback of being soul-crushingly boring. I’m willing to predict right here and now that no presidential candidate in history will ever ride to victory on the coattails of tax simplification and regulation reform.

Personally, I’d like to combine tax reform and climate change: Cut personal and corporate tax rates (possibly along with simplification) and make the cuts revenue neutral via a substantial carbon tax. Even better: Don’t make it revenue neutral, and use the additional revenue to fix Social Security and rein in the long-term deficit. That would combine tax reform, climate change, entitlement reform, and deficit reduction all in one package. Booyah!

What’s more, this is a plan that should appeal to conservatives, since it would cut marginal tax rates and make up for it with something that’s essentially a consumption tax. It would also attack carbon externalities, which is extremely congenial to orthodox conservative economics, and reduce the long-term deficit, ditto. And there’s more! It would broadly stimulate investment in clean energy without picking winners and losers, which ought to be a good thing even for conservatives, and it would do it in a very predictable way, which would be good for business.

Of course, this would require conservatives to admit that climate change exists, and that doesn’t seem to be on the horizon. It would be different if we were dealing with actual conservatives: something like this might seem like a very appealing compromise. Unfortunately, it’s been a long time since we had genuine conservatives to deal with. The bright-eyed true believers of today’s Republican Party are something else entirely.

So I leave it to the hive mind. Are there any other bright ideas floating around out there? Are there any big visions Obama could offer that are both inspiring and politically conceivable?