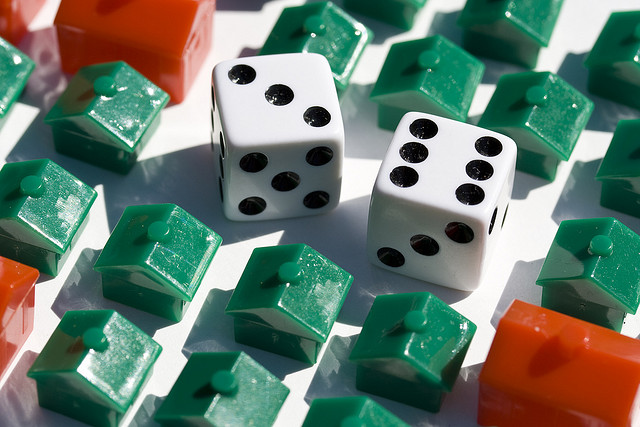 Did BHO and his regard for minority mortgagees ruin the economy?Flickr/<a href="http://www.flickr.com/photos/wwworks/2959833537/sizes/z/in/photostream/">woodleywonderworks</a>

As conspiracy theories go, this one’s The Unified Theory of Barack Obama’s Disastrous Hand Ruining Everything: Before he entered politics, the president was a crafty trial lawyer whose push to get easy money for black folks in liberal Chicago caused the mortgage meltdown and Great Recession.

That’s not exactly how the Daily Caller sums up its new hit piece, but it’s close. Led by Neil Munro (yes, that Neil Munro), the conservative tabloid site reports that “President Barack Obama was a pioneering contributor to the national subprime real estate bubble,” as the lead attorney in a “landmark 1995 mortgage discrimination lawsuit against Citibank” that sought relief for hundreds of African-American would-be borrowers—many of whom have since defaulted on their loans.

1) Obama was fresh out of law school, and lead lawyers for both parties in the case said back in 2007 that Obama’s role was a minor, low-level one—”behind-the-scenes stuff.” The Caller‘s assertion that Obama was the key counsel on the case is apparently based on the fact that, alphabetically, his name came first in the court petition’s list of lawyers. (Or, as MM put it: “The Daily Caller Tries and Fails to Read Legal Documents.“)

2) Nobody from the gub’mint crammed bad loans down Citibank’s gaping maw. The point of the discrimination suit—which was heard and decided by Judge Ruben Castillo, the son of two Latino immigrants—was that Citibank and other lenders denied credit to black applicants who’d met the same creditworthiness standard as whites who had received loans. The suit’s remedy was to set one standard for all borrowers, regardless of race. (The Daily Caller didn’t bother checking whether white subprime borrowers of similar mortgages had a default rate that differed significantly from the African Americans represented in the lawsuit. Kind of important info.)

3) The idea that the Great Recession of 2008 resulted from socialist organizers trying to house poor minority folks has long been bandied about on right-wing message boards and nativist websites (as well as on Glenn Beck and in Congress), but it’s just a scapegoating meme that has no basis in reality. Actual economists, looking at the global recession and the financial-sector breakdown that caused it, have concluded that the minorities-demanding-mortgages thesis is a load of horse hockey.

One last thing that Media Matters didn’t mention: Multiple studies in recent years have concluded that nonwhites do, in fact, default more frequently on mortgages than whites—but that’s because minorities, of all economic classes, tend to be pushed into different, riskier loan products than white folks. A 2010 report (PDF) by the Center for Responsible Lending found that “not only were borrowers of color more likely to receive subprime loans than white borrowers, but within the subprime market, borrowers of color were more likely to receive the most expensive loans and were more likely to receive subprime terms associated with increased default risk, such as prepayment penalties.” The previous year, a study by two researchers (PDF) from the Federal Reserve Bank of San Francisco determined that “once we control for the probability of obtaining a higher-priced loan, the differences in foreclosure rates among minorities and whites shrink considerably.”

Translation: Minority borrowers aren’t any less responsible than whites—they’re just likelier to be preyed upon by unscrupulous loan originators, because more expensive loans make them more money upfront. And if lenders are selling the loans off as securities, they don’t have to worry about the borrowers’ ability to pay. In fact, the Obama Justice Department has won three major settlements from big banks who’ve admitted they steered creditworthy people of color into high-priced, high-risk borrowing instruments—just to score bigger profits, and with no regard for the borrowers or the wider financial system.

All that predatory lending inflated minorities’ default rates. Which made it easy to blame them for the downturn. Which fed narratives like the Daily Caller‘s.

But hey, who cares about facts? It’s an election year.