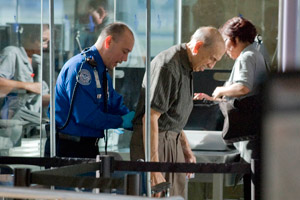 I am so going to regret writing this post. For those of you who used to respect me, please just chalk it up to food poisoning or early onset Alzheimer’s or whatever. But here goes.

But guess what? The fact that you personally are annoyed — you! an educated white-collar professional! — doesn’t mean that the process is idiotic. I’ve heard it called “security theater” so many times I’d be rich if I had a nickel for each time it popped up in my browser, but although the anti-TSA rants are often cathartic and amusing, they’ve never made much sense to me. All the crap that TSA goes through actually seems 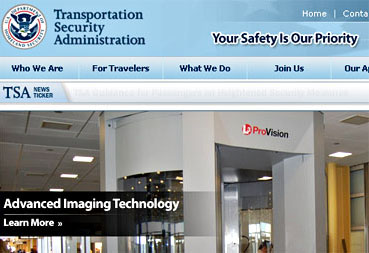 pretty clearly directed at improving the security of air travel. So here we go, a brief Q&A session about TSA procedures:

Q: Why do we have to take our shoes off?
A: To prevent terrorists from packing explosives into their shoes and bringing down an airplane.

Q: Why do we have to go through those new body scanners?
A: To prevent terrorists from packing explosives around their bodies and bringing down an airplane.

Q: Why the 3-ounce limit on liquids?
A: To prevent terrorists from bringing liquid explosive precursors through the gate, mixing them together in the onboard lav, and bringing down an airplane.

Q: Nobody’s ever brought down an airplane this way. Why worry about it?
A: Nobody thought a bank could bring down the entire global economy before 2008, but guess what? Banks kept trying and eventually they figured out how to do it. Ditto for terrorists, who learn from their mistakes. Maybe next time they’ll try a slightly bigger shoe. Or a better explosive. Or a more efficient trigger. And then the plane comes down. Do you really want to risk your life on the proposition that terrorists will never figure out how to make this stuff work even if we give them enough chances?

Q: But other countries don’t do all this stuff.
A: That’s because Islamic terrorists mostly target American planes. It’s fine for Switzerland to be a little less cautious, not so fine for us.

Q: The Israelis don’t do all this stuff either. Why not adopt their methods?
A: Because even experts don’t think we could scale up the Israeli system for use in the United States. What’s more, the Israeli system is only convenient for Israeli Jews. It’s a huge pain in the ass for everyone else.

Q: Shouldn’t we focus more on intelligence and less on physical security?
A: Sure. But I’d guess that our intelligence just isn’t good enough to rely on it exclusively.

I’m not trying to defend everything TSA has put in place. Some of the stuff they do, like the penknife and nail clipper bans, really is stupid. And maybe backscatter scanners don’t work. I’m certainly open to the idea. But honestly, most of what they do is pretty easy to understand: they’re trying to make it so hard to get weapons and explosives on board airplanes that no one bothers trying — and the few who do can’t pack a big enough punch to do any damage. For the most part, it seems to be working. The price we pay for this is plenty of annoyance, but again: do you really want to get rid of the annoyance and bet your life that terrorists will never figure out how to make a better shoe/underwear/liquid bomb? I’m not so sure I do.

And now for a political note: this is GOP catnip. For seven years, Republicans insisted that every security procedure ever conceived was absolutely essential to keeping the American public safe, and anyone who disagreed was practically rooting for an al-Qaeda victory. Now a Democrat is in office and suddenly they’re outraged over some new scanners. Helluva coincidence, no? But this is no surprise: this issue works for them on every possible level. In the short term, it gives them something to pound Obama about. In the medium term, it gets the chattering classes chattering about something other than the fact that Republicans have no remotely plausible plan for improving the economy. And in the long term, if a plane does come down, they will absolutely crucify the Obama administration for its abysmal and cavalier approach to national security. (Remember the dry run that Drudge and Fox News conducted over the underwear bomber?) And if you think we can fight back by reminding them that security was reduced because of their outcry, you are sadly delusional. That argument won’t get two seconds of air time.

But what about our civil liberties? Maybe you think that even if TSA’s procedures are slightly useful, they aren’t useful enough to justify all the intrusion. Instead, we should just accept the risk of an occasional plane falling out of the sky. Think again: if a plane comes down, you can just kiss your civil liberties goodbye. Today’s TSA procedures will seem positively genial compared to what takes their place with the full and eager support of the American public. Given that reality, if you’re really worried about civil liberties you should welcome nearly anything legal that protects air travel from explosives, even the things that are really annoying and only modestly useful.

So that’s that. I know that pretty much everyone in the universe disagrees with me about this. And obviously I’m not averse to pruning away some of TSA’s dumber policies, making the security lines quicker and more efficient, and trying to get better at the largely invisible policing stuff that everyone agrees is essential. At the same time, while TSA’s security procedures might have plenty of problems, they really do seem quite sensibly oriented toward the quite sensible goal of keeping explosives off of airplanes. I’m really not sure why everyone thinks this is nothing more than security theater.