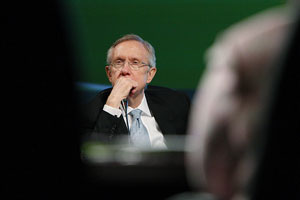 Senate Majority Leader Harry Reid said last night that he hopes Democrats will settle on a strategy for moving forward on health care reform by sometime next week. That’s good news of a sort, but take it with a few grains of salt.

The way forward is already pretty clear. If the Democrats are going to do this, the Senate needs to use the filibuster-proof reconciliation process to pass some fixes to its health care reform bill. Then the House needs to pass the “fixed” Senate bill. That’s the only remotely realistic path that anyone has suggested that gets to comprehensive reform. Every other plan is either politically unworkable (e.g., having the House pass the Senate bill unchanged) or doesn’t lead to comprehensive reform (e.g., breaking the bill up). If the Democrats want to pass reform, the path is obvious. Reid is sort of beating around the bush here. When he talks about settling on a strategy, what he means is agreeing on potential “fixes,” figuring out workarounds to potential procedural roadblocks, and, most important, figuring out whether he and Pelosi have the votes to proceed.

It’s worth remembering that some Democrats, including Steny Hoyer, the House Majority Leader, said last week that this week would be the week that Dems would settle on a strategy for getting health care reform done. When confronted with that fact at his weekly press briefing on Tuesday, Hoyer said, “Did I say that? I was in error.” He added that he anticipates making a decision “just as soon as the way forward is clear.”

Democrats would also do well to think about another thing Hoyer said on Tuesday. He told the story of a woman with an “orange-sized tumor” and no insurance who called his home, explaining that she didn’t know what she was going to do. She couldn’t go to the emergency room, because she wasn’t gushing blood, she wasn’t poor enough to qualify for Medicaid, and she wasn’t old enough to qualify for Medicare. But she didn’t have the $12,500 she needed to have the tumor removed. “That’s what this health care debate is about,” Hoyer said. “We talk a lot about this complication, that complication, this that and the other thing. But what this debate is about is really that woman who called and left me a message and said ‘what do I do?'”

Kevin is traveling today and tomorrow.