Greg Sargent flags the latest robopoll from Public Policy Polling as good news for the cause of healthcare reform. It turns out that Republican are ahead in the generic congressional ballot regardless, but there’s a direct pair of questions asking for support levels if healthcare passes vs. healthcare failing. If it fails, Republicans lead by five points. If it passes they lead by only four points. In other words, there’s no difference: Dems don’t lose anything by passing healthcare, so they might as well do the right thing and then do their best to sell it to the public over the next ten months.

As much as I’d like to believe this, I was all ready to disagree with Greg. After all, what matters isn’t the national sample, but how people in each state respond. And if swing states have more Republicans and fewer Democrats, “no difference” could easily lead to a several point deficit once you look at the crosstabs. 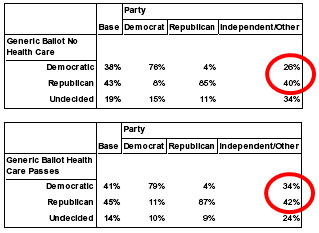 But then I went and looked at the crosstabs. And guess what? The news is actually better than I expected. Basically, Republicans are already as opposed to Democrats as they can get: 85%-4% if healthcare fails vs. 87%-4% if it passes. So it’s not as if passing healthcare is going to cost any Republican votes. Likewise, Democratic support for Democrats goes from 76%-8% if healthcare fails to 79%-11% if it passes. It’s the same margin either way.

This is only one poll, and state-by-state results still matter more than a national sample. But it sure looks as though independents would be noticeably less disgusted with Democrats if they have the spine to pass their healthcare plan. What’s more, since this poll makes it clear that independents are more open on the subject than either confirmed Democrats or confirmed Republicans, there’s a real opportunity to win them over once healthcare is passed and everyone calms down a little.

This is a small beacon of hope, but it’s real. It really does look as if passing healthcare is better for swing-state Democrats than not passing it.