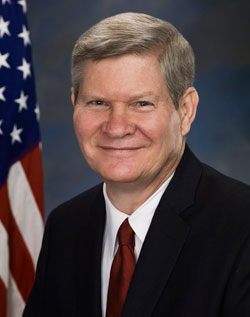 Sen. Tim Johnson will be the senior Democrat on the banking committee after Dodd leaves Congress. (Official photo.)(Cross-posted from MoJo.)

On Twitter, Reuters’ Jim Pethokoukis points out that Chris Dodd’s retirement is (like everything) “great news for banks.” It will make South Dakota’s Tim Johnson, who likes banks even more than Dodd, the senior Dem on the banking committee. “And Byron Dorgan was a big Glass Steagall guy,” Pethokoukis writes. Indeed—Dorgan was one of several lawmakers who gave earily prescient quotes to the New York Times when the bill was repealed ten years ago. As Kevin wrote in the most recent issue of the print mag, the banks already own the Hill, so while these retirements are good for Big Finance, they don’t mark some big transition—they simply reinforce the status quo.

Over at TAPPED, Monica Potts wonders “why the White House fought for [Dodd] until the very end.” That’s easy: Dodd and Biden are close friends, and if Dodd had stayed in, Biden would probably have kept fighting for him all the way through to election day. I won’t be surprised when the Times and the Post do their play-by-plays tomorrow or Friday if it turns out that the Veep played a key role in convincing Dodd to give up the fight.

On the Dorgan front, DougJ at Balloon Juice has a truly epic email from a former Dakota senate staffer who gives the R-rated explanation of why Silver immediately moved the North Dakota race to the top of his “most likely to flip” list. It’s probably too profane for a family blog, but you can read it over at Balloon Juice.