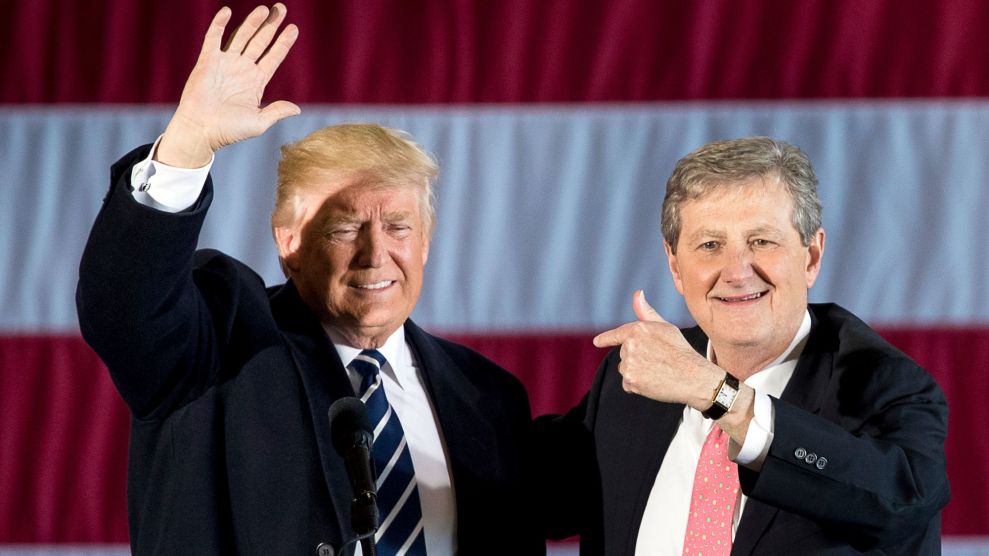 An influential Republican senator on Sunday lent credence to President Donald Trump’s deranged “Crowdsrike” conspiracy theory—the debunked notion that the Democratic National Committee, with help from Ukraine, fabricated the 2016 Russian hacking operation. Sen. John Kennedy (R-La.) claimed during a Fox News Sunday interview that neither he nor anyone else knows whether it was Russia or Ukraine that stole Democratic emails during the campaign. The is simply untrue: The US intelligence community has definitely concluded that the Russian government directed the hacking.

On FOX News Sunday: Louisiana Senator John Kennedy reacts to President Trump saying Ukraine may have the DNC server, an idea that runs contrary to the intelligence community. Chris asks Senator Kennedy who he thinks is responsible for hacking the DNC. #FNS #FoxNews pic.twitter.com/zBbzuoXSje

On Fox, host Chris Wallace played a video of Trump claiming last week that the DNC “gave the server to Crowdstrike,” a cybersecurity firm that the president said was “owned by a very wealthy Ukrainian.” Trump added, “I still wanna see that server. You know, the FBI has never gotten that server.” Virtually every word of this was false, as Mother Jones’ Dan Friedman explained:

This is a nonsense conspiracy theory…Crowdstrike, based in California, is not owned by a wealthy Ukrainian. The DNC did not have one server. They had about 140. Crowdstrike imaged them and then gave the data to the FBI, not Ukraine. Trump’s claim is part of a false argument that Ukraine, not Russia, meddled in the 2016 election. Russia, which US intelligence agencies have concluded interfered in the 2016 election, has promoted the lie that Ukraine was responsible.

Wallace then asked Kennedy, “Who do you believe was responsible for hacking the DNC and Clinton campaign computers—their emails? Was it Russia or Ukraine?”

Wallace then noted that the “entire intelligence community says it was Russia.”

“Right, but it could also be Ukraine,” Kennedy shot back. “I’m not saying that I know one way or the other.”

Trump has repeatedly attempted to undermine the intelligence community’s conclusion that Russia interfered in the 2016 election to help him win—most famously during a joint press conference last year with Vladimir Putin in Helsinki. The president’s obsession with Crowdstrike has now become a key element of the ongoing impeachment crisis. He pressured Ukrainian President Volodymyr Zelensky to investigate this conspiracy theory during their July 25 call. Last month, acting White House Chief of Staff Mick Mulvaney seemed to acknowledge that Trump had suspended military aid to Ukraine in an effort to get Zelensky to probe the “corruption related to the DNC server.” Mulvaney later tried to walk back that admission.