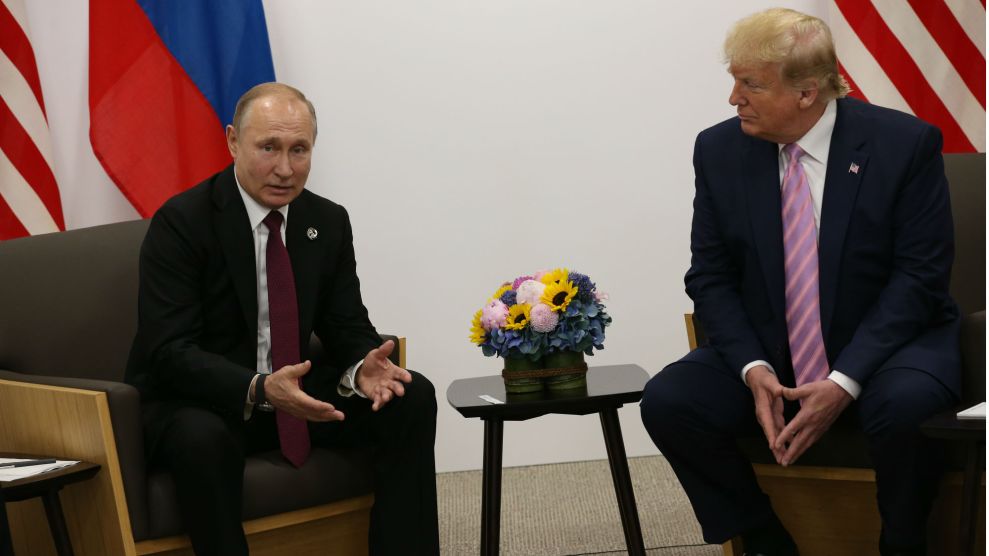 During Friday’s testimony by Marie Yovanovitch, the former US ambassador to Ukraine, Democrats argued that Trump’s views on that country run parallel to talking points pushed by Russian President Vladimir Putin.

While questioning Yovanovitch, Daniel Goldman, a top Democratic aide on the House Intelligence Committee, cited a February 2, 2017, joint press conference held by Putin and the far-right leader of Hungary, Viktor Orban. In it, Putin pushed the view that it was Ukraine, not Russia, that interfered in the 2016 US election.

“We all know, during the presidential campaign in the United States, the Ukrainian government adopted a unilateral position in favor of one candidate,” Putin said. “More than that, certain oligarchs, certainly with the approval of the political leadership, funded this candidate, or female candidate, to be more precise.”

The US intelligence community has concluded that Russia interfered in the 2016 election, stealing and disseminating thousands of Democratic emails and spreading fake news damaging to Hillary Clinton. There is no evidence that Ukraine did anything similar.

Asked about Putin’s statement, Yovanovitch said that amid intense concern in the United States about Russian meddling, it was “classic” for Putin, a former KGB officer, “to try to throw off the scent and create an alternative narrative that maybe might get picked up and get some credence.”

Conspiracy theories about Ukraine interfering in the 2016 election have been seized upon by Trump defenders and by Trump himself. Rudy Giuliani, Trump’s personal attorney, worked to find Ukrainians who would help advance the claim. Numerous US officials have said that Trump held up both US military aid and a bilateral meeting with Ukrainian President Volodymyr Zelensky as part of a pressure campaign to extract from Zelensky a public pledge to launch politically motivated investigations—including into claims that Ukrainians had worked to assist Clinton in 2016.

In his July 25 call with Zelensky, Trump specifically referenced the debunked theory that the Democratic National Committee’s server, which US intelligence agencies have said was hacked by Russia, is secretly in Ukraine. Trump mentioned Crowdstrike, a private company that helped the DNC investigate the matter, and which features prominently in right-wing efforts to blame the hack on someone other than Russia. “I would like you to find out what happened with this whole situation with Ukraine,” Trump told Zelensky. “They say Crowdstrike…I guess you have one of your wealthy people…The server, they say Ukraine has it.”

There’s no evidence that Trump learned of these conspiracy theories by listening to Putin, but the convergence of the two leaders’ views on Ukraine is nonetheless notable.

“Is it your understanding that what Vladimir Putin is saying here in this press statement in February 2017 is similar to what President Trump says on the July 25 call related to the 2016 election?” Goldman asked on Friday.

Minutes before the start of Friday’s hearing, the White House released a rough transcript of an earlier call, from April 21 of this year, between Trump and Zelensky. During the April call—unlike in July—Trump didn’t demand any investigations, and the White House seemed to hope Friday that the positive tenor of the conversation would blunt the impact of Yovanovitch’s testimony. But the release raised questions about what changed after April.

In a closed-door deposition in October, George Kent, a deputy assistant secretary of State, offered a perspective. Summarizing briefings he had received, Kent testified that Putin and Orban, in phone conversations with Trump, had helped sour the US president on Ukraine after the April call. Both men had clear motives to do so. Russia seized Crimea from Ukraine in 2014 and continues to back fighters in Ukraine’s Donbass region. Orban is in a spat with Ukraine over his effort to allow ethic Hungarians in Ukraine there to vote in Hungarian elections.

“Both leaders, both Putin and Orban, extensively talked Ukraine down, said it was corrupt, said Zelensky was in the thrall of oligarchs…negatively shaping a picture of Ukraine and even President Zelensky personally, ” Kent told lawmakers.

Communications with Putin and Orban, and with Giuliani, “shaped the president’s view of Ukraine and Zelensky and would account for the change from a very positive first call on April 21 to his negative assessment of Ukraine” later, Kent said.