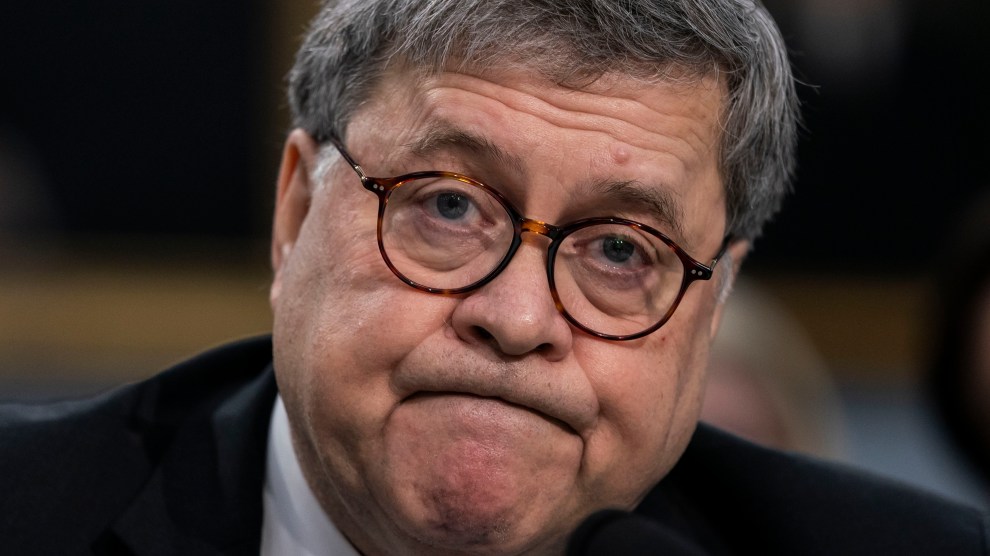 As the impeachment hearings continued, Attorney General Bill Barr on Friday trash-talked Democrats for attempting to “drown the executive branch with oversight demands,” saying they were working for political gain without thinking of the consequences.

“In waging a scorched-earth, no-holds-barred war against this administration, it is the left that is engaged in shredding norms and undermining the rule of law,” Barr told a room of attorneys at the annual gathering of the Federalist Society, a conservative legal group that has been influential in determining President Donald Trump’s nominees for federal judges.

The remarks about Democrats ignoring the rule of law were especially ironic because they came a mere hours after Roger Stone, one of Trump’s previous advisers, was convicted on all counts for lying to Congress during its probe into Russia’s interference in the 2016 election. The attorney general’s speech also came on the second day of presidential impeachment hearings examining allegations that Trump attempted to interfere in the 2020 elections by asking Ukrainian President Volodymyr Zelensky to investigate former Vice President Joe Biden and his son Hunter.

Barr criticized Democrats for launching a “holy war” and using “any means necessary to gain momentary advantage,” while he said conservatives “tend to have more scruple over their political tactics and rarely feel that the ends justify the means.” He said:

In any age, the so-called progressives treat politics as their religion. Their holy mission is to use the coercive power of the State to remake man and society in their own image, according to an abstract ideal of perfection. Whatever means they use are therefore justified because, by definition, they are a virtuous people pursing a deific end. They are willing to use any means necessary to gain momentary advantage in achieving their end, regardless of collateral consequences and the systemic implications. They never ask whether the actions they take could be justified as a general rule of conduct, equally applicable to all sides.

Conservatives, on the other hand, do not seek an earthly paradise. We are interested in preserving over the long run the proper balance of freedom and order necessary for healthy development of natural civil society and individual human flourishing. This means that we naturally test the propriety and wisdom of action under a “rule of law” standard. The essence of this standard is to ask what the overall impact on society over the long run if the action we are taking, or principle we are applying, in a given circumstance was universalized—that is, would it be good for society over the long haul if this was done in all like circumstances?

For these reasons, conservatives tend to have more scruple over their political tactics and rarely feel that the ends justify the means. And this is as it should be, but there is no getting around the fact that this puts conservatives at a disadvantage when facing progressive holy far, especially when doing so under the weight of a hyper-partisan media.

Barr reportedly received a standing ovation, but outside the halls of the Federalist Society, his remarks sparked outrage and intensified calls from the left to impeach not only the president, but the attorney general himself. Others were quick to roast Barr for his statements. “Bill Barr is the type of bare knuckles lawyer the Church would have hired thirty years ago to cover up sex abuse cases,” Richard Painter, a former White House ethics counsel, tweeted.

Another lunatic authoritarian speech as Barr goes from attacking “radical secularists” at @NDLaw to one month later attacking the “resistance” at @FedSoc.
Impeach Barr now!

“Yesterday AG Barr addressed a radical political group and gave one of the most vicious partisan screeds ever uttered by a US cabinet officer,” Rep. Bill Pascrell (D-N.J.) tweeted Saturday morning. “Barr says trump should have king-like powers. Barr is a liar and a fanatic and should be impeached and stripped of his law licenses.”

This is so outrageously inappropriate for an AG to be saying. You are the head of the DOJ for all Americans not just the ones in the Federalist Society. Please start acting like it. https://t.co/OcaHZGi0ey

As the top law enforcement official in the land, Barr should not engage in ideological warfare. That shreds norms and undermines his credibility. https://t.co/GSMbJy3dU9

I read Bill Barr’s speech to the FedSoc just now. I think it is best delivered while wearing a uniform and mirrored shades, and while standing on a balcony.