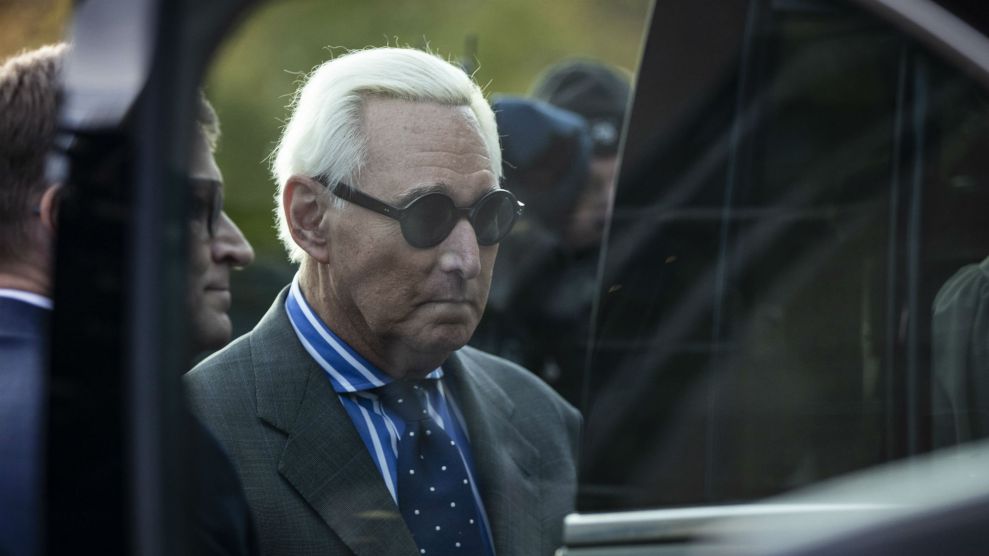 Roger Stone gets into a vehicle as he leaves court on November 8, 2019 .(Photo by Drew Angerer/Getty Images

A federal jury has convicted Roger Stone, a longtime adviser to President Donald Trump, of making false statements to Congress, obstruction of justice, and witness tampering.

The false statement and obstruction of justice charges have maximum sentence of five years each. Witness tampering carries a maximum of 20 years in prison. But under federal sentencing guidelines Stone, a nonviolent offender without past convictions, can expect to receive a substantially shorter sentence. US District Court Judge Amy Berman Jackson rejected a request by prosecutors for Stone to be immediately taken into custody. Jackson scheduled Stone’s sentencing for Thursday February 6.

The verdict marks a sharp fall for Stone, who in the summer of 2016 functioned as the Trump campaign’s “access point” to WikiLeaks, Trump campaign CEO Steve Bannon testified during the trial. Stone bragged publicly that he had inside information on WikiLeaks’ plans to release emails stolen from Democrats, including from Clinton campaign chairman John Podesta. The trial revealed that Stone was in contact with top Trump campaign officials—and, according to one witness, with Trump himself—regarding the Democratic emails, which US intelligence has concluded were stolen by Russian hackers.

The fallout from the emails, and Trump’s subsequent electoral victory, boosted Stone’s self-styled reputation as a master of political dirty tricks. An award-winning 2017 documentary, “Get Me Roger Stone,” depicted Stone’s career—which included low-level work for Richard Nixon—positively enough that Stone aggressively promoted it himself.

But there was a problem with Stone’s self-promoting. He was essentially claiming a role in the middle of an alleged conspiracy involving Kremlin interference in the 2016 election. As congressional and Justice Department investigations into the Trump-Russia scandal heated up, Stone walked back his boasts.

In September 2017, in testimony before the House Intelligence Committee, Stone downplayed his ties to WikiLeaks. And, importantly, he claimed he had exchanged no emails, texts, or documents of any kind related to WikiLeaks or its founder, Julian Assange. Stone also said he did not communicate with the Trump campaign about what he claimed to have learned about WikiLeaks’ plans to release emails. Stone told the committee, in an October 2017 letter, that he had used an intermediary to communicate with Assange—a comedian and activist named Randy Credico. But Stone said he never asked his intermediary to do anything related to Assange or WikiLeaks and that he had exchanged no written communications with that person about WikiLeaks.

These were all lies, prosecutors argued in trial. Stone exchanged numerous emails and texts with Trump campaign officials, including Bannon, about WikiLeaks. Stone also emailed with others, including Credico, about the group. On the very day that Stone told the House committee that he only communicated with Credico over the phone or in person, the two men had exchanged 72 text messages, prosecutors showed. Stone also, repeatedly, asked Credico to obtain information from Assange, prosecutors noted.

The government also argued that Stone lied by naming Credico as his backchannel. When Stone famously tweeted that “it will soon [be] the Podesta’s time in the barrel,” prosecutors noted, the dirty trickster had not yet communicated with Credico about Assange. Stone instead appears to have based that claim on an August 2, 2016, email he received from Jerome Corsi, a right-wing proponent of conspiracy theories. Days earlier, Stone had instructed Corsi to travel to London, where Assange was holed up in the Ecuadorian Embassy, and “Get to Assange!” In his August 2 email, Corsi told Stone he had learned “the hackers” had damaging information on Podesta.

Prosecutors noted that regardless of whether Stone meant Corsi or Credico when he mentioned an intermediary, he had lied by claiming he did not ask that person to seek information from WikiLeaks and did not communicate with him in writing.

Stone knew he had lied to the committee, prosecutors said, because after his testimony, he began a campaign to prevent Credico from providing information to Congress or other investigators that would contradict Stone’s claims. Stone threatened and cajoled Credico, according to emails and texts revealed during the trial. In January 2018, Credico told Stone he knew Stone’s testimony was false. “No one cares,” Stone texted back. Stone told Credico he would be “indicted for perjury if you are stupid enough to testify,” suggesting that Credico, an alcoholic, would be a less credible witness than Stone if their stories conflicted.

When Stone learned Credico had been subpoenaed by the committee, Stone encouraged Credico to “do a Frank Pentangeli” imitation. That’s a reference to a character in the movie Godfather Part II who reverses his plan to testify against organized crime boss Michael Corleone and lies to Congress after Corleone arranges to have Pentangeli’s brother brought from Sicily to the hearing. The movie scene was the subject of much discussion during the trial, though US District Court Judge Amy Berman Jackson blocked prosecutors’ request to show a clip from the movie to jurors. Stone’s efforts to pressure Credico resulted in the witness tampering charge against him.

On April 9, 2018, after Credico said he would reveal information contesting Stone’s claims and “all will come out.” Stone responded: “I am so ready. Let’s get it on. Prepare to die cock sucker.” Stone told Mother Jones last year that he was not threatening Credico and that he wrote those words because Credico “told me he had terminal prostate cancer.” Credico said he didn’t have prostate cancer and that Stone’s message “was a threat.” Lawyers for Stone, who did not testify in his own defense, did not bring up Credico’s supposed illness during the trial.

Testimony Tuesday by former campaign staffer Rick Gates suggested that Trump probably lied to special counsel Robert Mueller about conversations he had in 2016 with Stone regarding WikiLeaks. Trump told Mueller in written answers that he did not recall “discussing WikiLeaks with [Stone], nor do I recall being aware of Mr. Stone having discussed WikiLeaks with individuals associated with my campaign.”

But Gates described a July 31, 2016, phone call between Trump and Stone, immediately after which Trump told Gates that “more information would be coming.” Gates also revealed that former Trump campaign chair Paul Manafort told Gates that he intended to brief Trump on information from Stone on WikiLeaks’ plans.