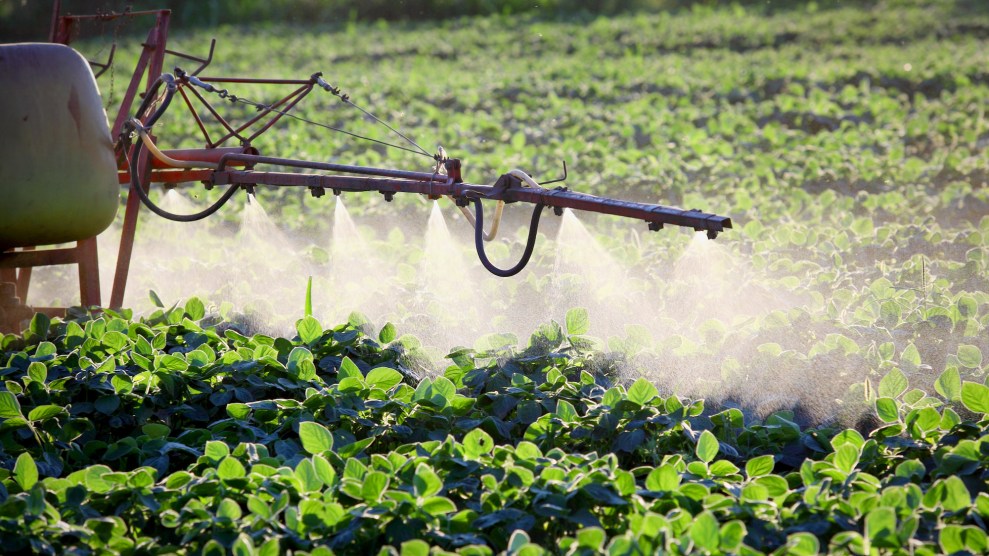 To hear Monsanto tell it, the rollout of its latest genetically modified soybean offering went without a hitch. The novel soybeans, engineered to withstand two different herbicides, debuted in 2016. Just a year later,  they were planted on 20 million acres —representing nearly a quarter of the total US crop.

In its latest quarterly profit report, released Wednesday, the company hailed that rapid uptake as a “record” adoption rate for one if its new products. And that’s not all. “The vast majority of U.S. growers are reporting tremendous success” with a newly formulated herbicide designed to be used on the soybeans, the company declared.

More than 3 million acres of soybeans not engineered to resist dicamba were injured by the wayward weedkiller in 2017, one expert calculated.

The debut was so successful, Monsanto insisted in its presentation to investors, that farmers will scramble to plant dramatically more of it in 2018—the company told investors it expects acreage planted to the novel soybeans to double next year. That’s good news for its shareholders, because Monsanto charges a $5 to $10 per acre premium for the Roundup Ready 2 Xtend seeds, as they’re known. So if farmers indeed plant 40 million acres of the double-resistant beans next year, that would thus boost Monsanto’s bottom line by as much as $400 million next year.

But in the real world, the launch of Roundup Ready 2 Xtend seeds has been more or less a full-on disaster, as my colleague Josh Harkinson noted in July.

Here’s what happened. The seeds exist to address to a problem caused by Monsanto’s previous generation of GM soybeans, engineered to resist one herbicide, known as Roundup (glyphosate). Farmers planted them so widely, and used Roundup so intensively, that weeds quite predictably evolved to resist it.

To fight this veritable plague of “superweeds,” Monsanto engineered the Roundup Ready 2 Xtend soybeans to fend off not just Roundup but also dicamba, an older, more toxic herbicide. Rather than hitting their fields with straight glyphosate, Monsanto proposed, farmers could now lash them with a glyphosate-dicamba cocktail.

What could go wrong? Well, two things—both of which, from the start, have been as easy to see as a crop duster cruising at low altitude through the sky in farm country. The first, as Pennsylvania State University crop scientist David Mortensen warned back in 2013, well before the product launched, weeds already resistant to glyphosate would quickly evolve to resist the dicamba-laced mix. On cue, dicamba resistance is already on the rise.

The second is that dicamba is known to be highly volatile. That is, after it’s been applied, it’s prone to convert into a gas and be carried in the wind, working its black magic far from the targeted site.

To address this vexation, Monsanto worked up a new low-volatility formulation of dicamba called VaporGrip. The company was so confident in its new version that it spent $975 million to expand its dicamba plant in Louisiana.

Things began to go awry last year, when Monsanto first released the Roundup Ready 2 Xtend soybean seeds, even though it didn’t have the go-ahead from the Environmental Protection Agency to roll out the VaporGrip dicamba mix. Surprising no one, farmers who adopted the new soybeans promptly lashed them with the old dicamba formulations—and surprise, surprise, much of that dicamba wafted off-target and onto other people’s land.

The Environmental Protection Agency announced it had gotten an “unusually high number of reports of crop damage that appear related to misuse of herbicides containing the active ingredient dicamba.” Missouri’s largest peach farm, which lies in soybean country, suffered extensive damage that it has blamed Monsanto for in a pending lawsuit. On the Missouri-Arkansas border, a dispute over dicamba damage reportedly led to a shooting death.

Monsanto insists that the off-target issues are all related to human error.

Uh … no. As adoption of the new beans spiked to 20 million acres in 2017, so did reports of damaged crops from neighbors. University of Missouri weed scientist Kevin Bradley, who has closely tracked the dicamba crisis, calculates that more than 3 million acres of soybeans not engineered to resist dicamba were injured by the wayward weedkiller during the 2017 growing season. Things got so bad in Arkansas that the state temporarily banned dicamba in July.

In August, a Reuters report revealed that the Obama EPA had approved of the allegedly low-volatility formulations without any independent testing of its volatility. Monsanto provided Bradley and other weed scientists with samples of the new formulation before it was released, but the samples “came with contracts that explicitly forbade volatility testing.”

Monsanto, for its part, insists that the off-target issues are all related to human error. “When farmers and applicators follow these instructions, they work,” a July 2017 press release states.

But several independent weed scientists—among them Missouri’s Bradley, the University of Tennessee’s  Larry Steckel,  and Aaron Hager of the University of Illinois—have disputed that assessment. “I think it [dicamba] is an inherently volatile product,” Bradley told me in an August interview. While the new formulation stays put better than the old one, he added, the volatility is “reduced but not eliminated.”

I asked him whether farmers might shy away from Xtend soybeans in 2018, to avoid the trouble that inevitably arises when one damages a neighbor’s property. He said that actually, farmers might indeed spray less dicamba next year, for fear of causing harm to neighbors. But he thinks more farmers may spend up to buy the double-resistant seeds, to protect themselves from other people’s rogue dicamba sprayings. “It’s just a guess,” he emphasized, “but people will want to protect themselves.”

That analysis puts Monsanto’s projection that adoption of Xtend soybeans would double to 40 million acres in 2018 in a harsh light. I asked Bradley to comment. “I wouldn’t be surprised at all to see 40 million acres,” he replied.