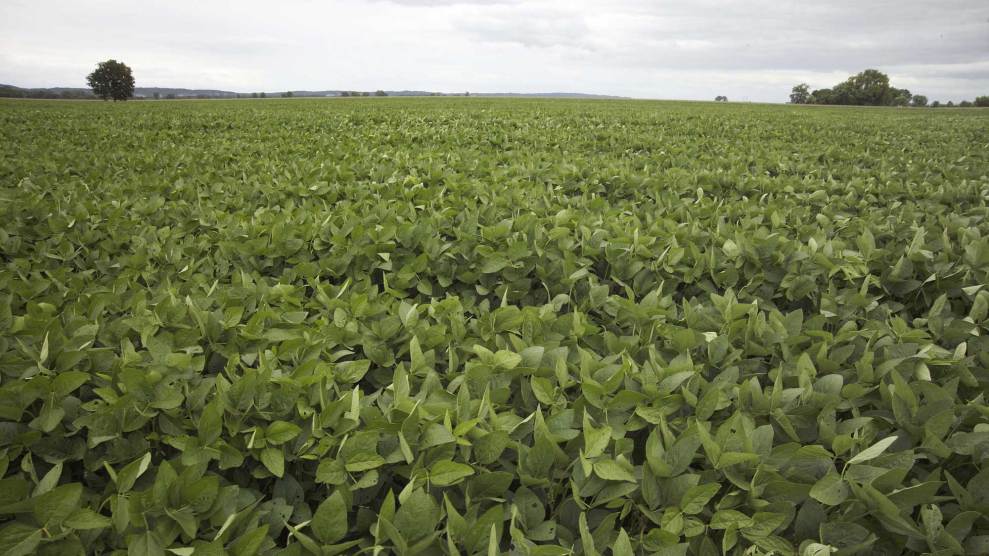 A soybean field.United Soybean Board

Across the Southern United States, a virulent new pest has been afflicting soybean crops.  Farmers claim it causes the plants’ leaves to cup together, their budding stems to die back, and their beans to curl into twisted, malformed pods. But this scourge is not your usual insect or fungus: It is dicamba, a potent weedkiller.

Monsanto sells a version of this herbicide that is harmless to the company’s new, genetically engineered soybeans—but not necessarily to the non-GMO versions that are often planted in fields nearby. In Arkansas, which has one of the country’s earliest soybean seasons, state regulators have received 420 complaints from farmers who say their non-resistant crops were damaged when dicamba drifted over from neighboring farms. On Friday, the Arkansas plant board voted to ban the spraying of dicamba for 120 days on all crops except pastureland; the ban will take effect if approved by the governor of Arkansas and a subcommittee of the state legislature.

A dicamba dispute between two farmers in Arkansas led to a shooting death.

Farmers, especially in the South, have been desperate for new weapons against superweeds that can’t be killed with more widely used herbicides. In the 20 years since Monsanto introduced a line of genetically engineered, “Roundup Ready” crops, including soybeans, farmers have sprayed so much of the weedkiller Roundup that weeds have evolved to survive it. Roundup-resistant Palmer amaranth, or pigweed, can grow three inches a day, reach seven feet or more, and damage harvesting equipment. But for now, at least, most pigweed can’t survive a dousing of dicamba.

The use of dicamba isn’t new, but it has not typically been applied on fields with mature crops. Conventional soybeans are sensitive to the herbicide, which can be carried along by the wind. Last year, when Monsanto introduced dicamba-resistant soybeans for the first time, some 200 dicamba spraying complaints were lodged in Missouri, with tempers flaring on both sides of the issue. A dicamba dispute between two farmers in Arkansas led to the shooting death of one and the arrest of the other on murder charges.

In a letter submitted to the Arkansas plant board last week and originally reported by the St. Louis Post-Dispatch, the Arkansas grower Tom Burnham estimated that half the farmers in his area who planted dicamba-resistant crops did so simply to prevent themselves from suffering damage. “I feel the need to plant a technology to protect your crop from off-target movement is tantamount to extortion,” he wrote.

Monsanto has criticized the proposed Arkansas dicamba ban as premature. “The Plant Board’s decision was made without hearing directly from farmers about the impact of removing a valuable weed management tool, without providing sufficient notice to the public and without allowing the opportunity for public input,” Monsanto said.  “Instead the board based its decision on off-target movement claims that are still being investigated and have not been substantiated.”

Monsanto maintains that its dicamba herbicide, known as XtendiMax, is safe when applied according to guidelines approved by the US Environmental Protection Agency. Farmers must consult specialty crop registries and provide buffer distances between adjacent fields. “These application requirements are designed to help minimize off-target movement and enable responsible use of the herbicide,” said Monsanto spokeswoman Allison Stein.

Even if farmers can work out the kinks with dicamba, it may soon go the way of Roundup. Though Monsanto says it is unaware of any cases of pigweed developing dicamba resistance, some experts have raised concerns. Bob Scott, a University of Arkansas weed specialist, recently told the Delta FarmPress: “There are fields with multiple metabolic resistant pigweed…where dicamba isn’t working too well.”