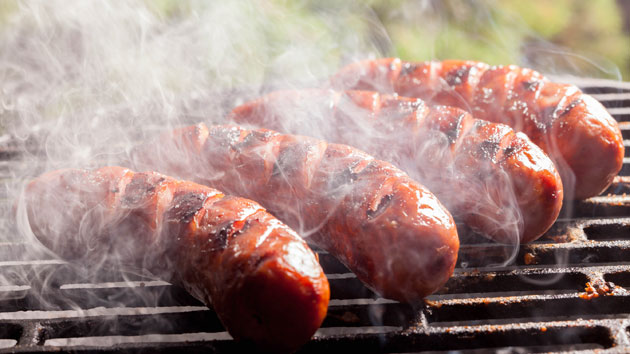 As your neighbors fire up their barbecues this Independence Day, the most popular day in America to grill, they won’t just send the scent of tri-tip or grilled corn over the fence in your direction—they’ll also send smoke. As my colleague Kiera Butler wrote about here, even the “cleanest” gas grills emit pounds of carbon dioxide into the atmosphere every hour they’re used. So how many emissions can we expect from dinner barbecues on the 4th?

Roughly eighty percent of American households own barbecues or smokers, according to the Hearth, Patio, and Barbecue Association. Let’s say all 92.5 million of them decide to grill on Saturday. A 2013 study by HPBA found that 61 percent of users opted for gas grills, 42 percent for charcoal, and 10 percent for electric (some respondents had multiple grills). If that reflected all households across the United States, and each household used its grill for an hour on the 4th of July, then we’d get a calculation like this:

That’s roughly as many emissions as burning 2145 railcars of coal, or running one coal-fired power plant for a month.

But let’s be honest—no one wants to give up summer grilling, and these emissions stats probably won’t convince your neighbor to turn off the barbecue. You might instead offer up ideas on recipes with ingredients that are friendlier to the planet—like these 4 veggie burgers that don’t suck.