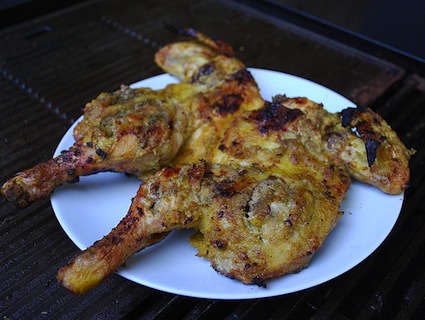 Because I’ve lived in two meccas of smoked meat—Central Texas and North Carolina—people often ask me for tips on barbecue at this time of year. Here’s the thing: barbecuing is long, smoky cooking over low heat. If you want to get the flavor of how to do it, check out the “Fire” chapter of Michael Pollan’s new book Cooked. The chapter ends with Pollan smoking a whole hog overnight in his backyard—a tricky process that takes practice, skill, and lots and lots of time. For me, barbecue is like beer: its making is best left to pros and obsessive amateurs.

Meanwhile, Tom’s Kitchen is devoted to simple home cooking, so you won’t see me devoting a column to proper barbecue anytime soon. But that doesn’t mean I don’t like to have a bit of fun with fire and smoke. What people usually have in mind when they ask me about barbecuing is really what should be called grilling—essentially, roasting over charcoal. (I’ve been told grilling also happens over gas flame, though that concept is foreign to me.) What follows is a dead-simple way to turn a whole chicken into a cookout through the magic of butterflying—cutting out the backbone with a sturdy pair of kitchen shears. Don’t be intimidated. It only takes about 15 seconds and it gets you a moist, evenly cooked bird with a crisp skin.

You can take your butterflied chicken party in many different directions. You could slather it in a barbecue-style sauce before crisping off the skin and serve it with slaw and other traditional ‘cue sides; you could go Mediterranean and marinade it in lemon zest and chopped rosemary and serve with a fresh salsa verde (essentially a parsley pesto); or do as the recipe below suggests, which is to look south to Mexico for inspiration. I hacked the meat up for tacos, and served with tortillas, guacamole, and a charred-tomato sauce.

2 cloves of garlic, crushed and peeled
½ teaspoon powdered hot chile pepper (could be paprika, smoked paprika, or ground chipotle pepper—I used the latter)
½ teaspoon of cumin, ground
A bit of fresh oregano if you have some on hand
½ teaspoon sea salt
Several generous grinds of coarse black pepper
I tablespoon of olive oil
1 4-pound chicken, preferably raised on pasture

Place the first five ingredients, garlic first, into a mortar and pestle. Pound the garlic into a rough paste. Add the oil, and pound a bit more.

Using kitchen shears, carefully cut the backbone out of the chicken (see this Melissa Clark video for an excellent demo), and using your hands, open the chicken outwards and press down vigorously, flattening it. Now turn it skin-side up and rub the paste all over the skin. Let it sit in the fridge for at least 30 minutes and optimally overnight.

Get some good hardwood charcoal going by whatever method you prefer—I use a chimney. When the coals are white-hot, collect them on one half of the grill basin. The goal is to create a hot side and a cool side. Put the grated grill top, which should be clean, in its place and let it heat up for a minute or two.

Put the garlic, half of the chopped chiles, and a pinch of salt in a food processor and set aside—you’ll run the blade after adding roasted tomatoes.

Place the butterflied chicken, skin side up, on the cool side of the grill, and the tomatoes on the hot side. Cover with the grill lid. Let the tomatoes cook, turning and recovering the grill as needed, until nicely charred all over. Add them to the food processor and whiz until you have a smooth salsa. Check for seasoning—add and process more chile pepper and salt if needed.

Meanwhile, leave the chicken cooking on the cool side, covered, until a meat thermometer plunged into the deepest part of a thigh reads 105 degrees. When it reaches that temperature, you’re ready to crisp off the skin. Simply flip the bird over, skin-side down, onto the hot part of the grill and let it cook there until the skin is crisp and caramelized and the thigh temperature reads 180 degrees.

Let it rest off the grill for 20 minutes before cutting the meat off the bones into taco-ready chunks. Serve with the salsa and plenty of hot tortillas.