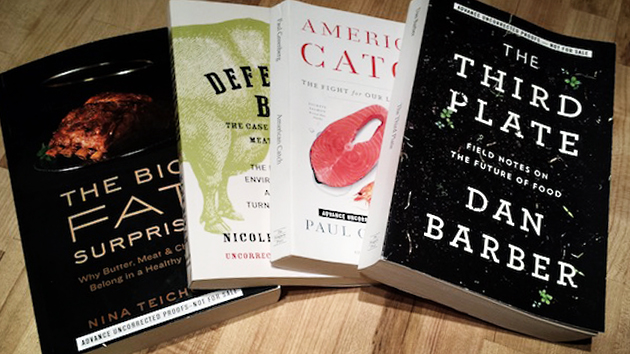 A veritable feast of letters.

The publishing industry may be in the midst of a long, slow decline, but it’s churning out a cornucopia of food books—and 2014 has been another banner year. In this post, I’ll look at my favorites on the politics/culture front; here, I take on the cookbook beat. 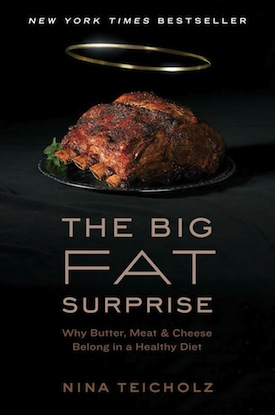 • The Big Fat Surprise: Why Butter, Meat, and Cheese Belong in a Healthy Diet, by Nina Teicholz. This is the most provocative and assumption-shredding food book I’ve read in years. With exhaustive reporting and lucid science explication, Teicholz drives home her central thesis: that dietary fat, even (if not especially) the saturated kind, is actually good for us. But that’s not even her most impressive feat. She also rips the halo from the so-called Mediterranean Diet (which she distinguishes from the actual diets consumed by Mediterranean dwellers), exposing it as one part sound science and three-parts olive oil industry-funded (you read that right) hokum. (I’m still reeling from the revelation that olive oil is a relatively recent addition to the Italian and Greek diets.) And she shows why the food industry’s recent rush away from trans fats—whose evils she herself helped establish in a 2004 Gourmet article—may actually be a net negative for public heath. (Partial spoiler: Unlike trans fats, which are artificially hardened vegetable oils, liquid vegetable oils generate lots of “toxic oxidative breakdown products” when they’re held at high heat for an extended time—as they are in fast food industry’s fry bins.) All in all, a must read. 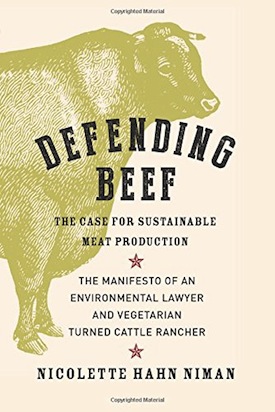 • Defending Beef: The Case for Sustainable Meat Production, by Nicolette Hahn Niman. A longtime critic of industrial agriculture and a lawyer by training, Niman mounts a lawyerly case for pasture-based beef production. She does so from an interested position. She’s the wife of Bill Niman, one of the nation’s most celebrated grass-based ranchers. But critics who want to dismiss Niman’s advocacy on economic-interest grounds have to grapple with the mountains of evidence she brings to bear. The main ecological question that haunts grass-fed beef involves climate change. Cows emit methane, a greenhouse gas far more potent than carbon, when they burp, which is often. But by grazing, they also promote healthy, flourishing grasslands, which suck carbon from the atmosphere and store it in soil. In doing so, they convert a wild vegetation that people can’t digest into a highly nourishing foodstuff. So on balance, do cows contribute to or mitigate climate change?  The conventional view holds that the burps win. Niman casts more than reasonable doubt on that verdict. Citing loads of research, she argues that enteric emissions (methane from burps) are likely overstated and can be curtailed by breeding and techniques like abundant salt licks, and more than offset by the carbon-gulping capacity of intensive grazing (where farmers run dense herds through a pasture for a short time, and then give the land plenty of time to recover). She also shows that healthy pastures also provide plenty of other benefits, including habitat for pollinating insects and birds, which are declining rapidly as industrial grain farming—mostly for grain to feed confined animals—expands. Reading Niman alongside Teicholz makes you want to grill a steak—or, better yet, a fatty and nutrient-dense beef liver. 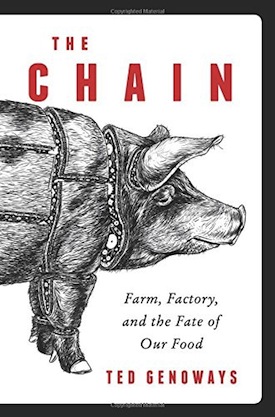 • The Chain: Farm, Factory, and the Fate of Our Food, by Ted Genoways. If Defending Beef delivers a compelling vision for how meat can and should be produced, Genoways exposes—perhaps more clearly than any writer since Upton Sinclair—its massive human toll in an era of corporate dominance. Building on two long features published in Mother Jones (here and here), he lays out in withering detail the horrific conditions faced by workers in factory-scale slaughterhouses after decades of union busting and a relentless push to speed up the kill line. Having laid out the unsavory tale of the rare neurological disorder that overtook workers at a Spam factory in Minnesota in the mid-2000s, Genoways shifts to the plight of animals raised cheek-by-jowl in factory-like conditions, tended by workers under severe pressure to make them conform to their environment. Abuse—beating with sticks, kicking, etc.—is routine, Genoways shows; and the meat industry uses its considerable political clout to promote laws that ban efforts to expose it. Niman exhorts her readers to choose their meat “wisely and well”; Genoways reminds us of just how tricky that task is. 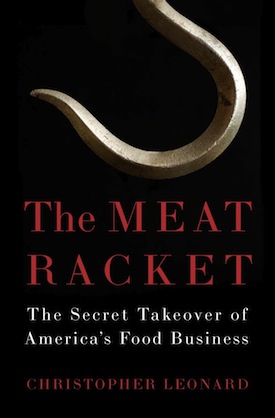 • The Meat Racket: The Secret Takeover of America’s Food Business, by Christopher Leonard. How did the meat industry amass such power? To answer that question, the veteran agribusiness journalist Christopher Leonard teases out the rise of Arkansas-based Tyson Foods, which evolved after the Great Depression from a small country business to the globe’s largest meat company. Today, it slaughters and packs about a quarter of the beef consumed in the United States, and a fifth of the pork and the chicken. Tyson developed the highly lucrative model that would come to dominate US meat production: grab hold of the profitable bits of the supply chain (selling feed and meat) and foist the risky bits (actually raising animals) onto farmers working under contract. As Tyson and other meat companies scaled up, they enticed farmers to scale up, too—taking on huge crushing debt burdens to build massive high-tech barns, keeping them subject to the whims of the big processors. Leonard has written the best account I know of on the serf-like conditions faced by farmers who operate under the heel of the meat giants. 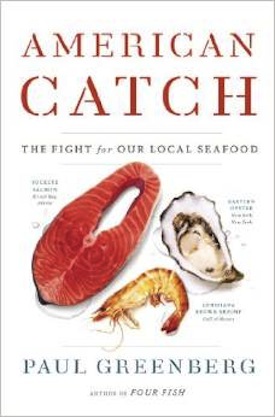 • American Catch, by Paul Greenberg. Most recent books on the state of the oceans suggest we’re eating too much seafood—that overfishing strains fish populations and contributes to their impending collapse. They’re probably right in global terms, but in American Catch, the excellent fish writer Greenberg shows that we Americans, at least, are eating too little of it—and that our fish-averse ways are contributing to ecological degradation, not just in the oceans that surround us, but also on land, particularly in population-dense regions like New York City and the Gulf Coast. In rollicking prose worthy of a novelist—Greenberg’s vocation before he took up seafood as his great topic—he spins out a compelling argument that goes like this: Despite the 3.8 billion acres of ocean that lie in US territory along more than 94,000 miles of coastline, we eat just 15 pounds of seafood per capita annually (vs. about 200 pounds of meat and poultry)—and 91 percent of that paltry amount is imported. As a result, we have little incentive to maintain our coasts as robust ecosystems. And so we pave over vital marshlands and salt flats, leaving coastal cities vulnerable to the ever-harsher storms promised by climate change. And we foul coastal waters with agricultural runoff and the pollution from near-shore oil drilling, sacrificing an abundant source of wild, healthy food. American Catch will leave you craving a couple dozen US-grown oysters—and a beer to help ease your pain at the folly he describes. 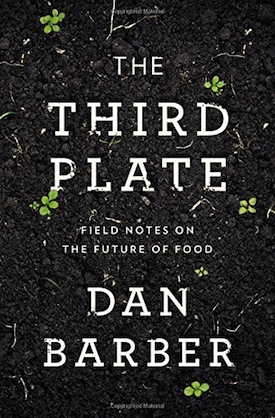 • The Third Plate: Field Notes on the Future of Food, by Dan Barber. Barber, a celebrated chef known for his obsession with farm-to-table cooking, offers a serious critique of the very trend that he rode to fame—and a vision for what comes next. The farm-to-table restaurant movement started in the 1970s, when chefs began to realize that decades of industrial agriculture had sapped ingredients of flavor. So they began to seek out more interesting produce from the few surviving small-scale farms, and helped spark a revival of agriculture focused on quality and flavor, not just volume and gross profit. But those innovative chefs never revised their vision of what Barbers labels the “first plate”: a big chunk of corn-fed beef meat with a few vegetables on the side. “The steak was now grass-fed, the carrots were now a local, heirloom variety, grown in organic soil,” he writes. “But inasmuch as it reflected all of the progress American food has experienced in the past decade, the striking thing about the second plate was that it looked nearly identical to the first.” Using his considerable storytelling skills and his wide travels as fodder, Barber makes the case for a “third plate”: a “new cuisine, one that goes beyond raising awareness about the provenance of ingredients and—like all great cuisines—begins to reflect what the landscape can provide.” That is, a much more farm-centered, regionally adapted vision of the restaurant—one that puts what’s being harvested at the center of the plate, not necessarily big, fancy cuts of meat. Bringing a Wendell Berry-like ecological vision to the role of the chef, Barber has produced a delicious read.