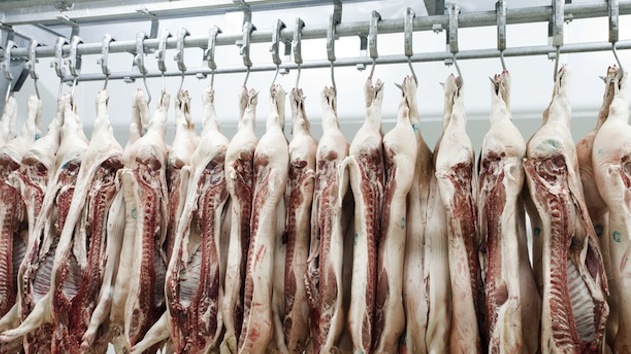 Much of the outrage generated by the meat industry involves the rough treatment of animals. But as Ted Genoways shows in his searing new book, The Chain: Farm, Factory, and the Fate of Our Food—which grew out of his long-form 2011 Mother Jones piece “The Spam Factory’s Dirty Secret”—the people employed in its factory-scale slaughterhouses have it pretty rough too. The book hinges on a rare neurological disorder that, in the mid-2000s, began to affect workers in a Spam factory in Austin, Minnesota—particularly ones who worked in the vicinity of the “brain machine,” which, as Genoways writes, used compressed air to blast slaughtered pigs’ brains “into a pink slurry.” As Genoways memorably puts it: “A high-pressure burst, a fine rosy mist, and the slosh of brains slipping through a drain hole into a catch bucket.” I recently caught up with him to talk about the world of our dark, satanic meat mills, and the bright spots he sees after immersing himself in it.

“You’ve got somebody who’s had a finger chopped off or has had a deep cut on their arm so that they’re bleeding all over their station. There’s somebody there to just pause that station and clean it while the rest of the line continues to move.”

Mother Jones: When did you first get interested in the meat industry?

Ted Genoways: I’m a fourth-generation Nebraskan, and my grandfather, my dad’s dad, during the Depression, worked in the packinghouses in Omaha around the union stockyards there. One Sunday, when they were visiting relatives just outside of Omaha, my grandfather decided to take my dad in to see the packing houses, and into the hog kill room, when he was probably about 10 years old. And my dad said that he was just sort of overwhelmed by the noise and the screeching of the hogs and the terror. My first book was a book of poems, Bullroarer: A Sequence, that had one section that dealt with some of that.

MJ: How did you go from poetry to investigating this disturbing brain disorder among meatpacking workers?

TG: Around 2000, I had a job working as a book editor at the Minnesota Historical Society Press, and the first book that I worked on there was a book called Packinghouse Daughter, by Cheri Register, about the packinghouse strike in Albert Lea, Minnesota, in 1959. Her father was one of the meatpacking workers there. I also read Peter Rachleff’s book about the Hormel strike in the ’80s in Austin, Minnesota, Hard-Pressed in the Heartland.

So it caught my eye in 2007 when there were some AP stories, and eventually the New York Times did a story, about the outbreak of this neurological disorder among the packing house workers at Quality Pork Processors in Austin. The fact that the people affected were almost entirely Hispanic intrigued me. 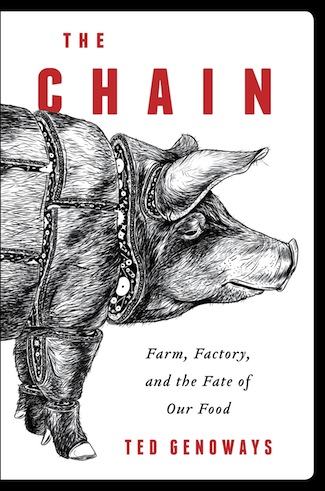 I started by wanting to tell the story of this medical mystery, but what quickly evolved was a picture of the hiring practices at QPP and how that tied back to the history of the strikes—there was just this whole universe that was contained in that story.

MJ: Rural Minnesota is a pretty white place. What did the strikes have to do with transforming the plant’s workforce from majority white to majority Hispanic?

TG: In 1986 the strike ends, and in ’87, they [Hormel management] announce that half the plant is a new company, called Quality Pork Producers, and the hundreds of people who worked there would be offered their jobs back, but no longer under the union contract.

And without union protection, the native work force began to drift away. In no time, you’ve got a nearly all-Hispanic workforce that’s made up hugely of undocumented workers. What surprises me is how quickly the communities turned their anger toward the new arrivals, and not the company itself.

TP: You report that since the launch of QPP, there’s been an emphasis on speeding up the kill line. And that ends up being the probable trigger for the neurological disease you dug into.

TG: Right, the line speed becomes the issue that the Mayo Clinic doctors see as the key factor in explaining what was happening—exposure to hogs’ aerosolized brain tissue increases as the volume of hogs processed goes up—a messy job got messier. And at the height of the [2007] recession, the demand [for Spam] was so high that they were offering overtime hours, so the hours of the exposure increased.

But beyond this neurological disorder that’s tied to the line speed, there’s all the repetitive stress injuries, there’s obviously the kind of traumatic injuries that occur from cuts and amputations on the line—all of those increase when line speed increases. I talked to a number of people who said, when amputations occurred among the workers, and you’ve got somebody who’s had a finger chopped off or has had a deep cut on their arm so that they’re bleeding all over their station, there’s somebody there to just pause that station and clean it while the rest of the line continues to move. Workers told me that at peak times, they’re not allowed bathroom breaks, or even ordinary breaks to sharpen knives or to wash their hands. And the more I got to looking at it, I started to see how line speed affects all phases of production.

MJ: Talk about some of those effects. 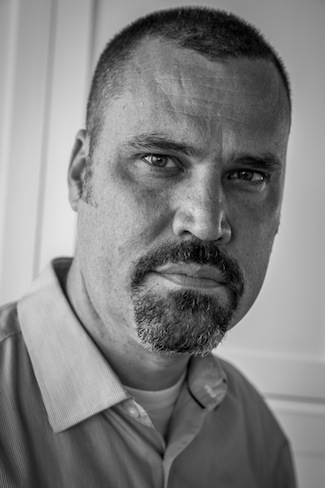 TG: First, you need more hogs coming in the door. And what that means right away is more CAFOs [concentrated animal feeding operations, or factory-scale livestock farms]. Ideally for the packers, it means more involvement in the CAFOs, how they’re run, what their production schedules are, what the animals are fed in order to produce an animal that has the lean-to-fat ratio that matches your needs for various products.

The other thing is if you’re going to increase speed but not increase the workforce, it means more mechanization, which is very often kind of experimental. And sometimes where things break down is in the quality of the meat or just how well it’s cut. Sometimes what breaks down is how sanitary it is, or how safe the workers are.

For the machine to work right, and especially for it to work right at high speed, every cut going into it has to be the same size. And as mind-boggling as it is, it’s cheaper for the company on that kind of scale to control the size of the hog than to change the size of the cut inside the plant.

And of course this is where you get all of the breeding programs, the antibiotics and growth enhancers that they’re fed so that every hog is on the exact same program and is coming to be the same size.

MJ: You dig deeply into the the special US Department of Agriculture program—known as HIMP, in the department’s evocative acronym—that allowed Hormel to run its line much faster than the industry standard.

TG: The argument that was made in the early ’90s, when this was first pushed, was that the old inspection model was outmoded. They said what we need instead is a modern system that will focus on microbiological testing. And that sounds like common sense. The problem is that the way that they wanted to implement this was to reduce the number of inspectors. That reduced number of inspectors then would be responsible for double-checking the inspection that would be carried out by the companies themselves.

And the companies argued that what this would allow them to do would be to run the line faster—they said, we’ll put out more product which will bring the price down for consumers, and we’ll have a safer product coming out as well. And it’ll reduce government costs. So it sounds like the perfect thing all around. The problem they had is what it essentially did was put the companies in charge of their own inspection.

“Workers told me that at peak times, they’re not allowed bathroom breaks, or even ordinary breaks to sharpen knives or to wash their hands.”

MJ: As I know from covering it myself, and know even better after reading your book, the meat industry is a relentlessly bleak topic. From your reporting, did you find any hope for positive change?

TG: The meat industry operates under the assumption that what people care about in food is low cost. And what foodie movements have done, as they move toward the mainstream, is demonstrate that people will pay a little bit more for food that they feel is safe—the animal has been well treated, the workers have been well treated.

The other thing we’re seeing is that Americans’ meat consumption has leveled off and even started to drop a little bit in recent years. People have said, “I’ll take a smaller portion if it’s higher quality, and I’ll pay a little bit more for it but I’ll worry a little less about what’s in it.” And if enough people will do that, the industry will respond.

My other concern is that as the American consumer becomes more aware and enlightened about all this, the meat industry is also doing its best to move into all parts of the global market. And there’s still lots of parts of the world where just having food is something that is a major issue—so you’re back to the lowest-possible-cost idea.

MJ: That makes me think of the fact that our biggest pork producer of all, Smithfield, recently got bought by a Chinese company—so even though we’re eating less factory-farmed meat here, production could actually increase, driven by demand in China.

TG: Yes. But still, here in the US, very few people were thinking about [the meat industry] 10 years ago. You talk to people about it now, and everybody is aware of Michael Pollan and Eric Schlosser and the whole wave of people who have come behind who are informing the public about all of this, and I think people are making different choices, now that they have that information.