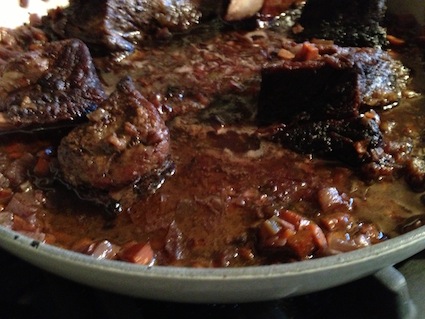 Braising—cooking something, usually meat, at low temperature in a covered pot with a little liquid—is a fundamental technique. Demanding a little preparation and a lot of patience, braising ever-so-slowly transforms tough, inexpensive cuts of meat into something sublime—and conveniently napped in its own luscious sauce (i.e., the cooking liquid). If you’re a meat eater and you haven’t braised before, now is the time. It’s not something you’ll be tempted to do in the summer.

I got the braising bug recently through the confluence of two factors: a cold snap here in Austin and the arrival of an advanced copy of Michael Pollan’s new book Cooked: A Natural History of Transformation, due out in April. I’ll have more to say about it soon—expect a review around publication date—but let it suffice to say for now that it contains an entire, very evocative chapter on the act of slow cooking meat in a little liquid.

Pollan’s prose made me crave the smell of beef, mirepoix vegetables—onions, carrots, and celery—and red wine gurgling gently on the stovetop. That is the essence of a French-style braise—you can also use the flavor palates of other cuisines. (In fact, for a Tom’s Kitchen last year, I braised pork ribs in a Mexican-style chile-pepper sauce; and you could certainly do the same for beef ribs.)

To me, the most attractive candidates for the braising pot are tough, bone-in cuts like ribs. Tough cuts are tough because they’re full of collagen, and braising works by melting the collagen into gelatin, giving rise to fork-tender meat. And bones are good because they enrich the cooking liquid, essentially turning it into a full-bodied sauce. The result is supposedly really good for you—the radical whole-foods group Weston A. Price Foundation ascribes great nutritional value to bone-enriched stocks:

Stock contains minerals in a form the body can absorb easily—not just calcium but also magnesium, phosphorus, silicon, sulphur and trace minerals. It contains the broken down material from cartilage and tendons–stuff like chondroitin sulphates and glucosamine, now sold as expensive supplements for arthritis and joint pain.

Braises tend to taste even better the the day after cooking, but there’s another reason to cook beef short ribs a day in advance: if you can let the cooking liquid cool overnight, the fat can be easily skimmed away. Beef ribs are a fatty cut, and too much fat in the final sauce makes the dish overrich. You can also serve them the same day—just carefully skim the cooking liquid of fat before reducing it in the recipe’s final step.

Pat the beef ribs dry with a towel, and liberally season them with salt and pepper on all sides. Place a heavy-bottomed Dutch oven or a brazier (a shallow version of a Dutch oven) over medium heat, and add just enough oil to coat the bottom. When it’s hot, brown the ribs on all sides. Be patient and allow for a nice caramelization—it will add big flavor to the dish.

Remove the ribs to a plate and add the diced veggies to the pot. Saute them, stirring often with a wooden spoon, until they’re very soft. As you stir, try to scrape the brown bits from the bottom of the pan into the sizzling veggies. If they the veggies to scorch before they’ve turned soft, turn the heat down a bit. 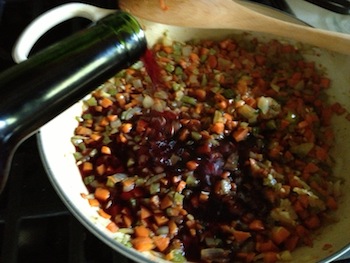 Now add the wine and herbs and turn the heat to high. Again, stir with a wooden spoon, liberating any brown bits that might still be clinging to the bottom. Bring to a boil, and let the wine reduce by about a third. Now turn the heat to the lowest setting on your stovetop, and place the ribs, bone side down, along with any juices that have accumulated under them, into the pot. Cover and let them simmer gently, checking every half an hour or so, until the meat is very tender (a butter knife should easily penetrate it). This will take about three hours.

Remove the cooked ribs to a plate, and pour the cooking liquid into a wide-mouthed jar. Cover both and store in the fridge overnight. Clean the pot. The next day, about an hour before you plan to eat,, skim the hardened fat from the top of the cooking liquid, and then dump the cooking liquid into the cooking pot. (Actually, the “liquid” may retain the shape of the jar—the gelatin from the bones will have given it considerable body.) Turn the heat to medium to melt the liquid. When it is fully melted, turn the heat to high and let it boil until it has reduced by about half. Taste for salt and pepper. Turn heat to low, and return the ribs, bone side down, to the pot. Cover, and let them simmer gently until heated through. Serve the ribs napped in their sauce, with a hearty seasonal vegetable, such as roasted turnips, as well as something green, like sauteed kale.