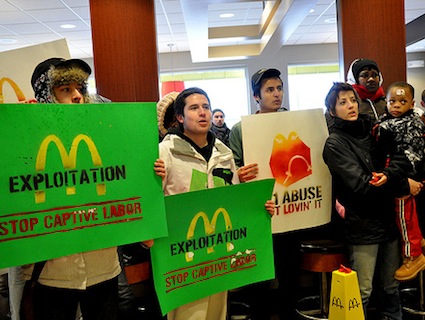 For McDonald’s shareholders, the past five years can be aptly summed up by the slogan “I’m lovin’ it.” According to Yahoo Finance, shares of the global fast-food giant are up 80 percent since April 2008—more than four times the gain of the S&P 500 over the same period. The company is robustly profitable—its profit margin hovers near 20 percent, and it’s got $2.3 billion in cash on the books.

Other fast-food giants are doing well by their shareholders, too. Burger King shares are up 25 percent over the past year, while YUM! Brands—the holding company for Taco Bell, KFC, and Pizza Hut—are up 10 percent. (Over the same period, the S&P 500 is up just 5 percent.)

For these companies’ employees, it’s been a much rougher road. The steep recession and glacial recovery have kept unemployment at high levels, meaning fewer opportunities to switch jobs and little leverage in wage negotiations. Even in ultra-expensive New York City—which has by far the nation’s highest cost of living—many McDonalds, Burger King, and Yum! workers draw the federal minimum wage, $7.25. The federal minimum wage translates to about $15,000 per year. This, in a city where the average rent for a two-bedroom apartment tops $3,000.

That’s why it’s so heartening that in New York City, workers from big-name  fast-food chains are walking off the job and taking to the streets to demand better wages. Here’s the New York Times:

Thursday’s strike, sponsored by a labor-community coalition that calls itself Fast Food Forward, seeks to press the city’s fast-food restaurants to pay their employees $15 an hour. Many workers say they can barely get by on the $7.25, $8 or $9 an hour that many receive; $9 an hour translates to around $18,000 a year for a full-time worker. The current minimum wage in New York State is $7.25, though lawmakers agreed last month to raise it to $9 by 2016.

For an excellent discussion of the situation, including interviews with workers having to support families on fast-food wages—check out this segment from Chris Hayes’ new MSNBC show: