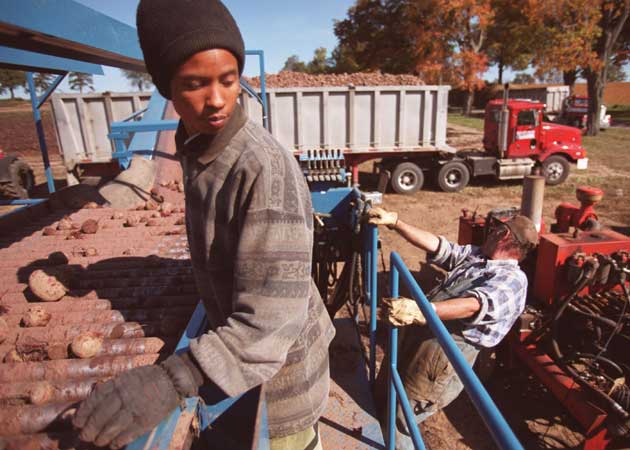 Americans love to talk about food—how asparagus is best prepared, which preservatives to avoid, which types of fish are in peril, where to find the best tacos or most delectable peach pies. Most of us spend far less time contemplating the people that pick, slaughter, sort, process, and deliver the products of this 1.8 trillion dollar industry—a group of workers that makes up one-sixth of the country’s workforce.

Unfortunately, the majority of these workers take home crummy wages and few benefits, according to a new report from the Food Chain Workers Alliance. Perhaps most strikingly, among workers surveyed by the FCWA, only 13.5 percent made a liveable wage (an amount FCWA defines as higher than 150 percent of the regional poverty level). And not a single agricultural worker of around the 90 surveyed said they earned enough to live on.

The Food Chain Workers Alliance survey results echo sobering realities about jobs across what the FCWA calls “the food chain”: a vast network of laborers in the production, processing, and distribution of food. In 2011, the lowest-paying jobs nationwide, according to the Bureau of Labor Statistics, were combined food preparers and servers and fast food cooks; restaurant servers and hosts, farmworkers, baristas, and food preparers didn’t trail far behind (and all made it in the bottom twenty).

“Jobs in the food system aren’t seen as high skilled,” says Joann Lo, Executive Director of the Food Chain Workers Alliance. “It’s hard work; you need to know the right way to cut a chicken in a poultry plant. But the general perception is that they are low skilled and don’t deserve good wages.” Overall, according to Bureau of Labor Statistics data, food workers earn less than workers in other industries: 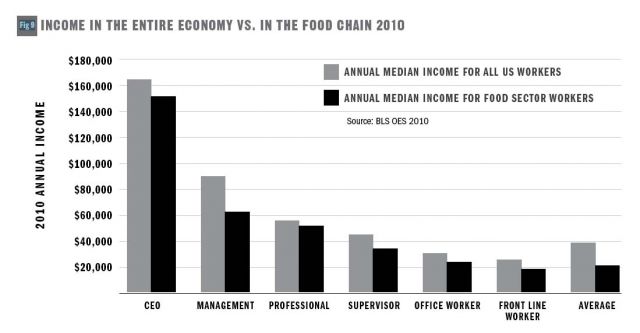 Source: “The Hands That Feed Us,” Food Chain Workers Alliance

As the report points out, fair market Rent (PDF) for a two bedroom place (think: small family) is $949 a month. An employee would need to make $18.25 an hour to afford it; instead, the median wage in the industry is $9.28 for high school grads, and only slightly more for those with some college under their belts.

Sometimes these low wages had to do with employees being paid piece rate rather than hourly, making earnings more dependent on a worker’s physical health and on supply fluctuations. In her intimate account of the working conditions of some food workers across the food chain, The American Way of Eating, journalist Tracie McMillan went undercover at a garlic farm to do piece-rate work. She writes of her coworker:

Even though Rosalinda’s tarjeta will show that she came in at 5:30 a.m. and left at 2:30 p.m., a nine-hour day, her check will say she was there for two hours—exactly the number of hours she would have had to work at minimum wage ($8) to earn what she made via piece rate ($16). Later, I ask advocates if this is unusual, and everyone shrugs: Not every contractor does it, but they see it regularly. Earning minimum wage at our piece rate would require a speed that seems impossible: five buckets an hour. (In my month in garlic, I do not meet anyone who can average that for an entire day.)

Aside from crappy pay, most food workers surveyed by the Alliance have few or any benefits such as health care and paid sick days. More than three quarters reported having no access to health coverage through work, and over half had no health care at all. A glaring 79 percent either had no paid sick time at their jobs or did not know if they had this benefit.

These grim statistics paint a Sinclairesque portrait of the employers involved in this network. Many of those surveyed, though, agreed that good wages and working conditions meant lower turnover, and more productive and skilled employees. But in practice, most food-chain business owners admitted that low standards across the industry drove the wages they pay down. “Part of it is the tremendous pressure on employers, especially down the supply chain,” Lo says, citing corporate consolidation as one of the leading factors behind poor working conditions. “They rely on being able to sell their food to bigger buyers, and those bigger buyers—for example, Walmart—are so big, they are lowering the price they’re paying, and that puts the squeeze on those employers. They’ll cut labor costs then, so they can stay in business and make a profit as well; that has extremely negative consequences for workers and employers.” (Mother Jones editors Monika Bauerlein and Clara Jeffery wrote about this demand for accelerated productivity without more compensation in their piece “All Work and No Pay: The Great Speedup,” and you can read about some of its sickening consequences in Ted Genoways’ investigative probe of a Hormel plant in Minnesota.)

Yet Lo maintains a glass-half-full approach to some of the depressing stats in her report. The 13.5 percent of workers earning a living wage “is important to note because it shows that it is possible for food systems employers to pay fair wages and still do well, and make a profit.” Such employees include Featherstone Farm, an organic Minnesota farm that pays all laborers hourly and provides housing for temporary workers, Los Angeles’ Good Girl Dinette, a diner paying fair wages while serving locally sourced food, and Yale’s dining program, which offers retirement benefits for its unionized food workers and has also committed to purchasing 45 percent of food from sustainable sources by 2013.

Lo points to unionization and the ability to organize without the threat of retaliations as some of the key measures that could make a big impact on the conditions of food workers. That and increasing the minimum wage for tip workers (like waiters); “their minimum wage has been $2.13 an hour for the past 21 years.”