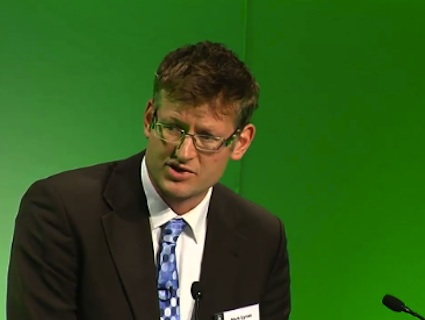 Mark Lynas at Oxford: "I don’t know about you, but I’ve had enough. So my conclusion here today is very clear: the GM debate is over. It is finished."Screen shot from video

Earlier this month, Mark Lynas, a prominent UK environmentalist and author, delivered a blunt attack (text here; video below the fold) on critics of agricultural biotechnology at a farming conference at Oxford University. Reviewing the development of his opinions on GMOs, Lynas reports that back in the ’90s, he had an instant emotional reaction against them. He saw the situation like this: “Here was a big American corporation with a nasty track record, putting something new and experimental into our food without telling us.” And so he “helped to start the anti-GM movement,” and “spent several years ripping up GM crops.” Then, in the process of researching climate change, he “discovered science”; and soon after, he reports, he “discovered that one by one my cherished beliefs about GM turned out to be little more than green urban myths,” which he goes on to list.

Lynas is quite correct that the backlash against GMOs is often clouded by emotion. He points out that even today, certain GMO critics murmur darkly about Monsanto’s “terminator” seeds, designed to produce sterile offspring so farmers can’t replant saved seeds. Actually, Monsanto itself swore off ever using the terminator trait back in 1999, declaring it shared “many of the concerns of small landholder farmers” who opposed it. The GMO seed industry protects its traits through patents and contracts, not genetics.

But he veers off course by portraying such fringe critics of GMOs as the driving force of an “anti-science movement” to block the novel technology. He dismisses the idea that reasonable people might disagree about the merits of GMOs. “[M]y conclusion here today is very clear,” he declares. “The GM debate is over. It is finished.”

For me, despite its merits as a corrective to knee-jerk GMO opposition, Lynas’ speech reads like a rant: an attempt not to spark conversation and debate, but rather to end it. If you agree with him, you are pro-science and guided by reason; if you disagree, you are anti-science and (as he puts it) “blinded by romantic nostalgia for the traditional farming of the past.”

“Any scientists working for the Union of Concerned Scientists leave their credentials at the door,” charged Lynas.

I found plenty to argue with in Lynas’ depiction of organic ag and whether we need GMOs to “feed the world”—here’s my take on that—but beyond the novelty of the very public conversion of a former anti-GM campaigner, I didn’t find much to chew on in the speech, even though it inspired glowing coverage from the likes of The Economist, the veteran climate reporter Andy Revkin, The New Yorker‘s Michael Specter, and Mark Tercek, CEO of the Nature Conservancy. Swaddling himself in the rubric of science, Lynas came off to me in his speech as a curiously unscientific thinker—someone who once spouted dogmatic certainties against GMOs and now spouts them in favor. I have no problem with changes in mind; but lack of nuance and bullheaded self-assuredness are always tedious, no matter what view one is espousing.

My suspicion about Lynas’ willingness to engage in debate were confirmed when Doug Gurian-Sherman, who holds a doctorate in plant pathology and is a senior scientist with the Union of Concerned Scientists, ventured a critique of Lynas’ speech. Gurian-Sherman challenged Lynas on several key points of fact (more on them below). Lynas’ response? Insults (“Any scientists working for the UCS leave their credentials at the door”), a change of subject (“I hold the UCS responsible for a significant proportion of modern-day global warming, thanks to its fiercely-held anti-nuclear ideology…”), and waving away of Gurian-Sherman’s specific points (dismissed without elaboration as “a couple of minor issues with my speech”).

Lynas complained that UCS had “given up arguing that GMOs are dangerous and scary,” and instead resorted to nit-picking. “I look forward to their opening up an honest and self-critical debate on this,” Lynas sniffed, “rather than attacking others like myself who challenge green orthodoxy where it likely harms society and the environment.”

The problem with Lynas seems to be that he can only engage in broad-brush arguments of the “dangerous and scary” sort—the nuanced critique offered by Gurian-Sherman sends him into rhetorical hyperventilation.

So it’s worth looking a bit more closely at a couple of Gurian-Sherman’s points. They are, in fact, fundamental. Lynas’ pro-GMO arguments hinge on the idea that GMOs are necessary because other ag technologies and methods aren’t up to the task. But that’s just not true. Gurian-Sherman counters that conventional breeding actually outpaces genetic engineering when it comes to increasing crop yields. And he points to the work of Iowa State University scientist Matt Liebman, who co-authored a peer-reviewed 2011 paper (along with a USDA scientist among others) showing that diverse crop rotations along with nitrogen-fixing cover crops maintain crop yields while drastically reducing the need for synthetic fertilizers and herbicides while leaving groundwater cleaner. Lynas does allow that “principles of agro-ecology such as recycling nutrients and promoting on-farm diversity should also be taken more seriously everywhere,” but it’s clear he feels they’re a sideshow to the real work of feeding the world, which will take place in corporate labs.

So why aren’t these GMO labs performing better—dramatically increasing crop yields or coming up with effective “drought-tolerant” crops? Lynas doesn’t consider these questions, but he does argue that GMO innovation is being “strangled by a suffocating avalanche of regulations which are not based on any rational scientific assessment of risk.” And not only do strong regulations—brought on by the demands of anti-science zealots, of course—dampen innovation. According to Lynas, they also ensure that mega-corporations like Monsanto and DuPont dominate the GMO industry by driving up costs and squeezing out smaller players. He points to a recent study from agrichemical/GMO-industry trade group CropLife, which estimates that it takes “$139 million to move from discovering a new crop trait to full commercialisation.”

Not quite, Gurian-Sherman counters: the Croplife report “states that the large majority of those costs are for R&D and other expenses rather than regulatory compliance.” I looked up the report myself, and Gurian-Sherman is correct: the Croplife researcher estimated that developing a new GM trait costs about $100 million, while negotiating regulatory hurdles costs about $35 million. So the very process of creating a GM trait is inherently expensive—and likely out of reach for independent researchers, regulatory costs to the side.

Conventional breeding requires an average of just around $1 million to bring a trait into the field—compared to $100 million for a GM trait.

Then Gurian-Sherman drops a bombshell: Conventional breeding requires an average of just around $1 million to bring a trait into the field. And, he adds, it works better: conventional breeding “continues to be more successful for all types of properties that Lynas mentions—drought tolerance, increased yield, nutrient enhancement, pest resistance, and more.” Again, the non-regulatory-related cost of a new GM trait is $100 million. So Gurian-Sherman is claiming that for literally one penny on the dollar compared to GMO technology, conventional plant breeding outperforms GM technology. Now here, to me, would be the crux of a very fruitful debate. If figuring out how to reshape global agriculture for climate change and a population of 9 billion is urgent—and I agree with Lynas that it is—then deciding how best to allocate scarce resources is key. If conventional breeding and techniques like crop rotation and cover crops produce better results at a fraction of the price of GMOs, than it seems environmentalists like Lynas should be supporting them vigorously, and not going to bat for the likes of Monsanto.

Can Lynas counter Gurian-Sherman’s claims? We don’t know, because instead of engaging in a conversation, Lynas satisfied himself with name-calling, subject-changing, etc. Now, it’s true that the anti-GMO movement has a crazy element—and Lynas ably skewers it in his speech. But by tarring all GMO critics with the same brush, and refusing to engage in serious challenges to his central claims, Lynas is acting like an ideologue, not an honest critic.

Here’s the video of Lynas’ talk.