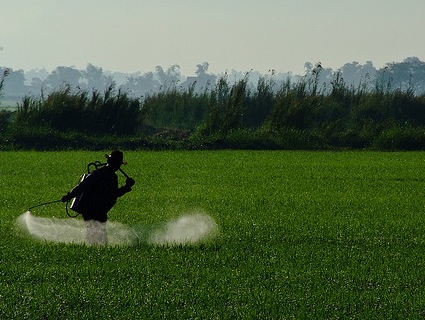 Yet again, scientists have looked at populations routinely exposed to the widely used herbicide atrazine and found trouble.

The latest: In a study published by Envionmental Research (summarized here), researchers found evidence that atrazine could be causing menstrual irregularities and low estrogen levels in women, even when it appears in drinking water at levels far below the EPA’s limit of 3 parts per billion.

The Vermont/Illinois paper comes on the heels of an analysis of the Agricultural Health Study—an ongoing look at people who regularly apply pesticides and their spouses—that found similar trends among women exposed to atrazine, as well as a 2009 study finding that atrazine levels in drinking water tracked with low-weight birth incidences in Indiana.

Meanwhile, as I reported three weeks ago, an independent scientific panel convened by the EPA found “strong” evidence linking atrazine to thyroid cancer and “suggestive” evidence linking it to ovarian cancer, also based on studies of human populations exposed to the poison through drinking water. The panel declared that the EPA had been seriously underestimating the cancer risk posed by atrazine in drinking water.

Now, assessing the danger of a toxic chemical like atrazine, the second-most-used pesticide on US farm fields, is tricky. You can’t ethically feed a suspected poison to people and see what happens.

You can use animals to gauge its effects, but it isn’t perfectly clear how the results apply to humans. And you can find human populations known to be exposed to it and see if any health concerns turn up—a practice known as epidemiology, and exemplified by the studies I cite above. But here, too, results are uncertain, because real-world situations contain infinite variables that can’t be controlled for.

But the absence of definitive proof that exposure to atrazine causes health trouble does not exonerate the lucrative agrichemical, as its maker, Syngenta, would have us believe. Until company execs volunteer to start quaffing the stuff and feeding it to their kids, animal studies and epidemiology are all we have. And for atrazine, both point to danger. (A recent University of California-Berkeley study found that low-level exposure to the chemical emasculates male frogs).

After the EPA publicized the findings of its cancer panel earlier this month, an agency spokesperson told me that the EPA would not even consider banning the chemical until 2013, at the earliest. That decision looks more dubious than ever as troubling new evidence emerges about Syngenta’s blockbuster herbicide.