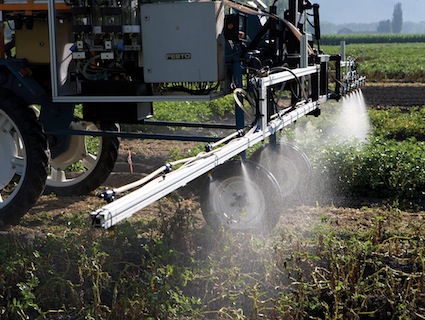 An herbicide applicator in action. Photo courtesy of Syngenta

As I reported a while back, sales of atrazine—a potent herbicide popular among large-scale corn farmers—are booming. That’s good news for atrazine-maker Syngenta, the globe’s largest pesticide company; and bad news for all ecosytems (including human ones) in and downstream from the places where farmers apply the nasty stuff.

The case against atrazine has gotten so strong that the EPA is actively considering joining the European Union in banning it. The EPA announced its review of atrazine in 2009 and suggested the process would take a year. In late July, the EPA committee overseeing the review met toi compare notes. An EPA press officer told me at the time it would be “upwards of 90 days” before the agency announced any decision.

Predictably enough, Syngenta is taking advantage of the slow-motion review to do what it did last time the EPA looked anew at the toxicology of atrazine, which was back in 2003: It’s funding research that exonerates its cash-cow herbicide and submitting it to the EPA. That tactic worked in ‘03, even though the Syngenta-bought research turned out to be pretty shoddy.

Pesticide Action Network’s Ground Truth blog points out that not long before the EPA’s July meeting, a team led by Syngenta employee Charles B. Breckenridge submitted a study claiming to show that atrazine isn’t linked to breast cancer, despite much evidence to the contrary. As the Physicians for Social Responsibility put it in a recent letter (PDF) to the EPA:

Several scientific studies have found a link between long-term exposure to atrazine and breast cancer. A study of women from all 120 counties of Kentucky showed a statistically significant increase in breast cancer risk with medium and high levels of atrazine exposure. A study from UK found a significant association between breast cancer rates and the application of atrazine in rural Leicestershire. Other studies using lab rats as subjects found exposure to atrazine increased risks of breast and prostrate cancers.

Surely, the EPA will heed the vast weight of independent research and train a skeptical eye on the company-funded stuff. Right? Pesticide Action Network isn’t sure. “Are we worried”? the group’s blog post asks. “Unfortunately, yes.”