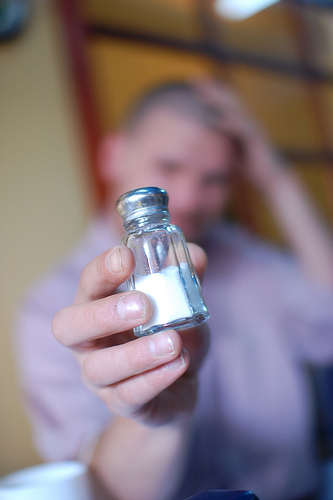 Fox News has apparently found a new way to scare America: The War on Salt.

“I know you know the war on terror is going on, and you’ve accepted that,” said “Fox & Friends” co-host Brian Kilmeade, leading into the segment on Monday morning (via Media Matters). “Can you accept the war on salt? It’s official.”

“[T]here is an official war on salt, despite recent studies that show that salt really isn’t that bad for you,” he continued. Then his co-host Gretchen Carlson chimed in:

So the FDA has opened up now a formal inquiry into salt reduction, so what is that going to mean? Will we now see that you can’t eat salt in your own home, potentially? I mean, you know, they’ve already done that with smoking, et cetera. Not really sure. The interesting thing is, some people are actually told to eat more salt — like me. Eat more salt, your blood pressure is too low. So, you know, you can’t really just apply this across the board for everyone.

The outrage was sparked by the Food and Drug Administration’s announcement on September 15 that the agency is opening an inquiry into whether or not to set standards on sodium intake. Not actually setting standards mind you—just looking into whether to set them. The announcement called for the “establishment of dockets to obtain comments, data, and evidence relevant to the dietary intake of sodium as well as current and emerging approaches designed to promote sodium reduction.” This comes after the Institute of Medicine issued a report more than a year ago that suggested that the FDA should set limits on the amount of salt in processed foods.

As a reminder, here’s why the FDA says excessive salt intake is a health problem that IT might want to regulate:

Hypertension, or high blood pressure, affects one in three U.S. adults – nearly 75 million people aged 20 or older. An additional 50 million adults suffer from pre-hypertension. High blood pressure can increase the risk for heart attacks, strokes, heart failure, and kidney failure. Too much sodium in the daily diet is a major contributor to high blood pressure.

Keep in mind that even if the FDA came out with rules, it wouldn’t be deploying salt cops to your local Big Boy to confiscate all the salt shakers. It would merely be setting guidelines about the amount of salt in processed, packaged foods—the kind of foods where people unknowingly consume all kinds of sodium currently.

Fox isn’t alone in the fear-mongering about a federal anti-salt crusade. The Daily Caller has also been drumming up fears that the vast government conspiracy to make your meals bland. So has the Heritage Foundation.

Most interesting, perhaps, is Fox’s use of the “science isn’t settled argument” when it comes to salt. Sound familiar? In this case, the network managed to find one study that contradicts the vast majority of scientific research that indicates excessive salt intake is unhealthy, and then used it to create the impression that the conclusion is somehow controversial. It’s something that Fox does regularly when the subject is climate change, too. And just like in that example, it’s entirely false.