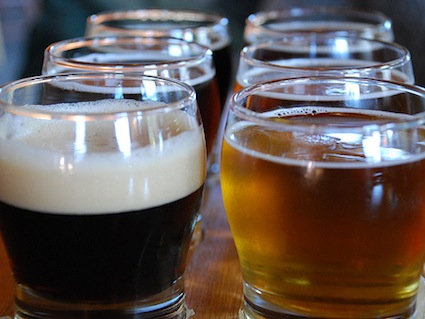 When an earthling declares—in no matter what language—”Let’s grab a beer,” there’s a good chance that creature will soon be sitting down to a cold one made by either Anheuser-Busch InBev or SABMiller. Together, these two global entities produce about a third of the beer consumed on the planet.

Here in the United States, their dominance is even greater. How great?

As a jaded observer of the US food scene, I’m accustomed to finding evidence of intense corporate control. Consider that just four giant companies process 60 percent of the 9 billion chickens raised for slaughter in the United States each year, and that just three companies slaughter and pack nearly 80 percent of cows raised here. I’ve written about how these arrangements are robustly profitable for the participating companies—and pretty awful for everyone else.

But even I’m shocked by the corporatization of beer. Anheuser-Busch InBev and SABMiller produce 80 percent of the beer consumed here. That’s four of every five brews. And almost all of them suck!

Yet the US beer industry is paradoxical. Even as these giants have lurched their way to market domination, we’ve seen an explosion of excellent local and regional brewers. And the United States, home of such swill as Bud Light and Coors Extra Gold, has emerged as the global standard-bearer for beer innovation and, yes, quality.

Here are two graphics that depict both sides of our paradox. The first one is from Phil Howard, a Michigan State professor who tracks corporate consolidation. It illustrates the dizzying variety of brands controlled by our beer overlords. (For a more readable interactive version, go here). 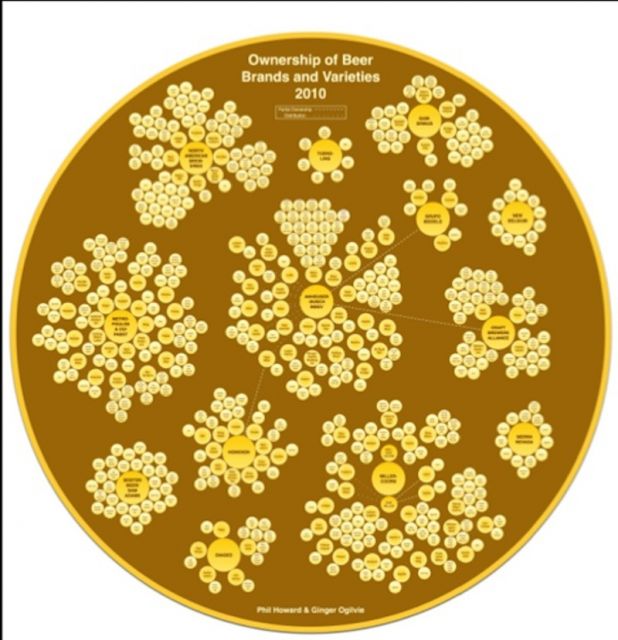 Our second chart tracks the number of beer-brewing facilities in the United States since the 1890s. 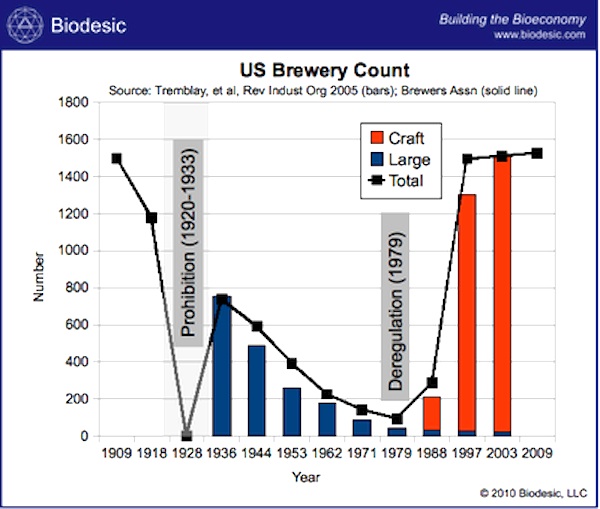 Note that breweries plunged to zero in 1930, in honor of that ignoble experiment, Prohibition, and then recovered for a few years after. But then the number peaks in 1936 and steadily declines to fewer than 50 gigantic breweries by 1980. This is the period when big brewers like Anheuser-Busch and Miller were taking over the market, shuttering smaller facilities.

But then the curve takes an utterly unexpected turn and begins to move back up. Today we have 1,759 brewing facilities—more than the pre-Prohibition high of 1,751. What happened? People got sick of corporate swill and started brewing their own. Some of them got really good at it and started small breweries. The circle of people who enjoy a good beer widened, drawing more good brewers in. And so on.

Update: The blog Balloon Juice adds a key detail to the narrative (and alerted me to the nifty chart above, which I have dropped in in place of the more basic one in the original version of this post):

When prohibition was lifted, government tightly regulated the market, and small scale producers were essentially shut out of the beer market altogether. Regulations imposed at the time greatly benefited the large beer makers. In 1979, President Carter deregulated the beer industry, opening the market back up to craft brewers.

Well, what Carter actually did was deregulate the home-brew market—he made it legal to sell malt, hops, and yeast to home brewers. That, I believe as a significant move, because the US craft-beer industry was largely started by enthusiastic home brewers who went pro.

At any rate, the explosion in popularity for real beer has been noted been by the giants, which is precisely why they can longer just peddle name brands like Bud and Miller but also have to roll out phony craft beers like Anheuser-Busch’s inglorious “Shock Top” line. And as people consume less flagship swill like Bud and Miller, the companies have responded by desperately buying up smaller regional brands in hopes of keeping as many consumers as possible. Hence the rapid consolidation.

And the need to try to satisfy the rising desire for variety and quality is costing them money. The beer market is “stubbornly diverse,” leading to a “high degree of localization,” an SABMiller exec recently complained to Bloomberg. This factor makes it “hard to drive real scale benefit” across the group’s marketing operations, he added.

Translated, the exec is saying it would be more profitable to just churn out lots of Miller, but those annoying drinkers out there demand at least the illusion of choice, so his firm has to maintain a dizzying number of brands.

What all of this is telling me is that corporations control plenty, but they don’t control everything. Their dominance of US beer is a mile wide but paper thin. Grassroots energy and desire rescued beer from true corporate domination starting in 1980. The same can happen in other areas of the food system.