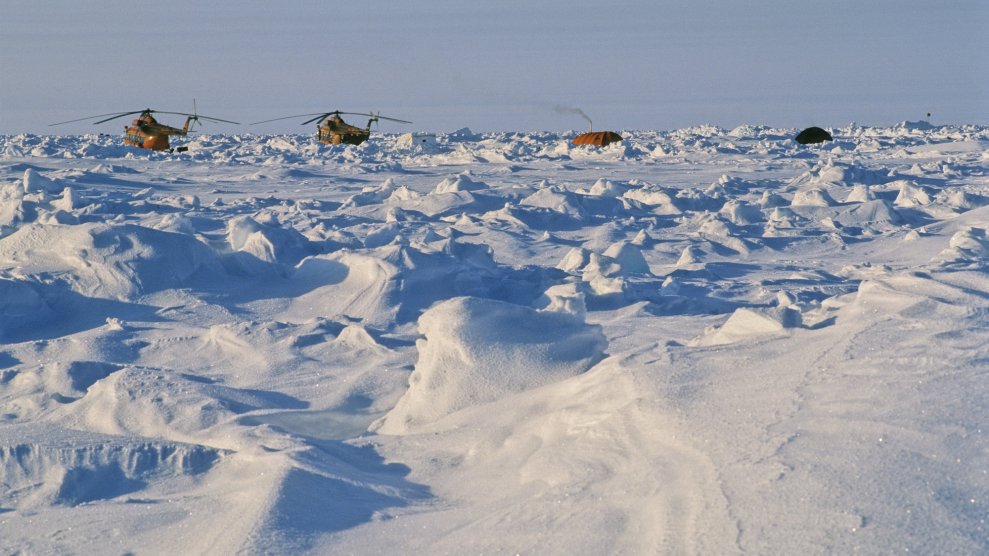 This story was originally published by Slate and Future Tense, which is a partnership of Slate, New America, and Arizona State University that examines emerging technologies, public policy, and society. It is shared here as part of the Climate Desk collaboration.

Getting to the North Pole is not straightforward. While early explorers made the trek from northern Canada and Siberia over hundreds of miles of treacherous ice, many modern adventurers choose to complete a “last degree” expedition, traveling from 89 degrees north to the true geographic pole during a brief window in the spring.* However, for the first time since 2002, no one’s making the trek this year, thanks to a combination of geopolitical tension and too-warm weather.

To understand why, first bear with me through some expedition logistics. Most aspiring North Pole expeditions—including both tourists and researchers—begin their journey in Longyearbyen, a small town on the Norwegian archipelago of Svalbard known for its global seed vault and for rumors that it outlaws dying. (In truth, there’s no rule against death there; it’s just recommended you do it elsewhere.) At 78 degrees north, it’s the world’s northernmost settlement, and it offers adventurers a base camp to stock up on gear, take a good hot shower, and go out for burgers and beers before making a bid for the pole.

The next step on the way to the pole is Barneo, a pop-up camp built every year as a depot for expedition hopefuls. (The name is meant to be a play on its contrast to the tropical island of Borneo.) Every year since 2002, a group of Russians have taken helicopters to search among the fragmented ice for a hearty ice floe close to 89 degrees north and then parachuted down to set up camp. Late March and April is traditionally the season for these expeditions; there’s enough sunlight for adventurers to trek, the temperatures are somewhat bearable, and the ice is still somewhat intact (though increasingly less so).

At Barneo, administrators assemble tents and, most crucially, fashion a makeshift runway to accommodate the airplanes that shuttle visitors to and from Longyearbyen. Nearly all North Pole travel works through Barneo. After all, it’s much easier to coordinate with its administrators than to, say, try to find a suitable ice floe yourself and travel from there. The ice floe typically sustains the camp for about a month, during which time hundreds of expeditioners arrive at Barneo to do research, take a helicopter to the pole (if you’re rich), run the North Pole Marathon, or ski roughly 70 miles to the geographic pole. There are, of course, also the gimmicks: This year, a gin company had planned to open a “one-day pop-up bar” at the pole giving away a lifetime supply of their booze. There is also a hockey matchup called “the Last Game,” meant to bring awareness to the fragility of the Arctic.

But all pole events came to a standstill after Barneo officials called off the season. While the base has experienced significant delays before—all 2018 expeditions were delayed by 10 days, and there were fears the season would be canceled altogether—this is the first time since Barneo was established that no explorers would have a shot at the pole.

The perfect confluence of politics and conditions stymied the base’s operations. Typically, the camp enlists an AN-74 transport plane from Ukraine, but it appears that conflicts between Russia and Ukraine interrupted its travel between Longyearbyen and Barneo. In a Facebook post last week, polar guide Eric Philips said delays stemmed from “the revoking of a permit allowing the Ukrainian-owned Antonov-74 from flying above 80 degrees north and onto what the Russians are claiming as their territory (despite being international ‘waters’).” That may sound like a wild move on Russia’s part, but given the country’s history in Svalbard and its desire to claim the North Pole for itself, it wouldn’t be out of character. Barneo is no stranger to this political drama. After some bad blood between Russia and Norway interrupted the 2016 season, Barneo officials considered moving the camp to Russian island Franz Josef Land going forward.

But another long-time polar guide, Eric Larsen, says it was actually the Ukrainians who tapped the brakes to avoid conflict with Russia, an account that Svalbard newspaper the Barents Observer backed up. Either way, the dispute caused significant delays, and by the time alternate aircraft could be called in, the weather had become unstable.

With climate change’s toll on the Arctic, the expedition season has grown shorter and more dangerous. Last year was Barneo’s shortest season to date—it was only open for business for 12 days. (For reference, ski expeditions typically take between seven and 10 days, so the window for a successful bid is small.)

This year, conditions were no better. After the Arctic sea ice reached its maximum winter extent in mid-March, it began melting rapidly, and, for the third year in a row, it is at the lowest amountever recorded at this time of year. As ice conditions deteriorate in coming years, so will adventurers’ chances of reaching the pole, and this will exacerbate the already-tense relationship between the governments of Arctic countries.

There’s been speculation for years about the end of the era in which humans can reach the pole. Even back in 2007, expeditioners were already remarking that the Arctic ice was markedly thinner and more treacherous than it was in the 1980s. That’s made it nearly impossible for more hardcore expeditioners to do the “proper” pole trip, in which they ski from northern Canada, Russia, Greenland, or Alaska to the pole, carrying their own gear with no outside support. While there were seven such expeditions between 2005 and 2010, there has been only one since then, which was completed in 2014 by Larsen and his partner, Ryan Waters. After that trip, Larsen predicted they would be the last people to do so. “North Pole expeditions are going the way of the passenger pigeon,” he told National Geographic a year later. In 2017, a pair of explorers tried to prove them wrong, but had to abandon their mission after one got severe frostbite.

Now, it seems even last-degree trips might be nearing their end as well. But Philips is hopeful. “With a year of planning I have no doubt that Barneo will be up and running as it has been every year,” he told me from an expedition in Svalbard. “Weather and ice conditions will still play their part in determining how a season unfolds, but these natural phenomen[a] … have affected Arctic travelers since the beginning.”