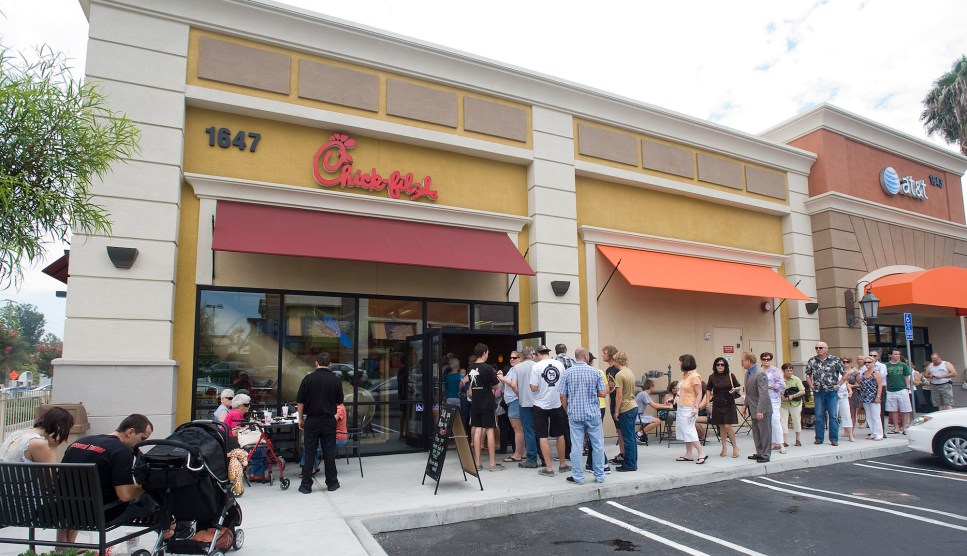 The Washington Post on Tuesday dropped another bombshell about Environmental Protection Agency Administrator Scott Pruitt’s attempts to exploit his office for personal gain. He had his staff arrange a call with the chairman of Chick-fil-A, and later its legal department, to discuss “a potential business opportunity.” In another violation of federal ethics law, it turns out that Pruitt asked his staff to find a job for his wife, Marlyn Pruitt. In this case, he was eyeing a Chick-fil-A franchise, which she didn’t end up pursuing.

Pruitt’s efforts on his wife’s behalf — revealed in emails recently released under a Freedom of Information Act request by the Sierra Club — did not end with Chick-fil-A. Pruitt also approached the chief executive of Concordia, a New York nonprofit organization. The executive, Matthew Swift, said he ultimately paid Marlyn Pruitt $2,000 plus travel expenses to help organize the group’s annual conference last September.

Multiple current and former EPA aides, speaking on the condition of anonymity to describe private conversations, said Pruitt told them he was eager for his wife to start receiving a salary. Two said Pruitt was frustrated in part by the high cost of maintaining homes in both Washington and Oklahoma […]

Federal ethics laws bar public officials from using their position or staff for private gain. A Cabinet-level official using his perch to contact a company CEO about a job for his wife “raises the specter of misuse of public office,” said Don Fox, who was head of the federal Office of Government Ethics during the Obama administration. “It’s not much different [from] if he [had] asked the aide to facilitate getting a franchise for himself.”

Asking a government scheduler, Sydney Hupp, to plan the meeting also marks a violation of federal rules barring officials from asking subordinates to perform personal tasks, Fox said. “It is a misuse of the aide’s time to ask the aide to do something like this that is really for personal financial benefit.”

So, why was Chick-fil-A so attractive to the Pruitts? One possibility could be Pruitt’s political ambitions. Pruitt has his eye on higher political office, and the Chick-fil-A brand carries weight in Republican political circles—it’s the go-to catering spot for GOP meetings.

That’s because of the private company’s evangelical roots, which go back to its founder S. Truett Cathy, who died in 2014 but was committed to running a Christian company. Chick-fil-A is closed on Sundays, often puts sayings from the Bible on its styrofoam cups, and has in the past lobbied against same-sex marriage and contraception coverage.

And that reflects Pruitt’s own deep roots to conservative evangelicalism in Oklahoma. He and his family have been actively involved with the First Baptist Church of Broken Arrow for decades; his wife taught Sunday school classes, and Pruitt gave lessons to adults about mixing faith and politics. When reporting from Oklahoma last year for a profile of Pruitt, I interviewed his longtime senior pastor Nick Garland:

Garland was one of the few who had known Pruitt for decades, not from his political life, but as a family man and deacon, deeply committed to his evangelical faith. Garland has watched Pruitt since the early ’90s, when Pruitt was a law student and the pastor recruited him and his wife to First Baptist. Over the years, Pruitt’s commitment to the congregation has been unwavering. His two children grew up in this church. Shortly after law school, he joined fellow parishioners on a missionary trip to Romania. When he was the state’s attorney general, he taught a seminar on how to blend one’s faith into communication and current events.

During his early days in Oklahoma, Garland says, Pruitt knew “there was something more he’s supposed to do than be a student of law.” Garland, who has a collection of eagle-themed memorabilia scattered around his office, compares Pruitt to the bird. “Eagles are one of the rare creations of God that delight in the storm,” he says. The 114-year-old Broken Arrow church subscribes to a conservative branch of the Southern Baptist tradition. When dozens of evangelical leaders endorsed Pruitt’s nomination in late 2016, they wrote an open letter explaining their rejection of “any ideology that sees human beings as a blight upon the planet and would harm human flourishing by restricting or preventing the rightful use and enjoyment of creation.” This echoed a view of environmental stewardship that has become widely accepted in conservative evangelical communities: “He created human beings in His own image, bearing responsibility to advance human flourishing through many forms of human activity, from agriculture and enterprise to technology and innovation,” the religious leaders wrote. In other words, the planet’s resources are there for the purpose of human use.

And to bring it all back to Pruitt’s franchise ambitions for his wife, this all sounds very much like the first motto of Chick-fil-A before its founder’s death. Their mission statement announced the purpose of the business was “to glorify God by being a faithful steward of all that is entrusted to us.”