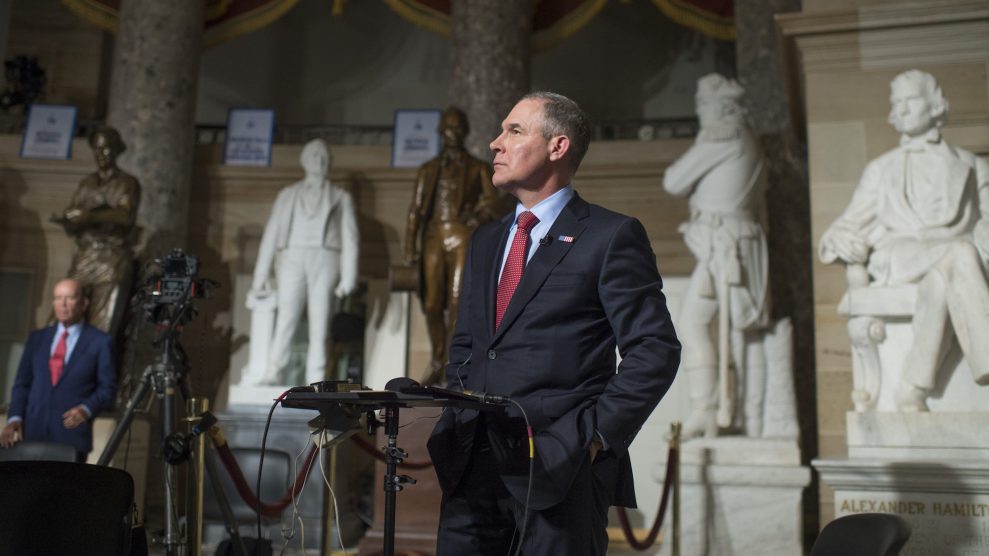 Scott Pruitt may be at the center of another Trump administration flight scandal over the skyrocketing costs of his first-class flights, but recently he’s been more likely to talk about how deeply his evangelical faith influences his work running the Environmental Protection Agency. Pruitt comes from a conservative brand of Christianity that interprets the Bible as sanctioning human exploitation of oil, gas, and coal, which are seen as gifts from God for man’s benefit.

“We have a responsibility to manage and cultivate, harvest the natural resources that we’ve been blessed with to truly bless our fellow mankind.”

Pruitt has alluded to his religion in EPA speeches and interviews before, but in an interview last week with the conservative Christian Broadcasting Network, he was more expansive than usual.

“The biblical world view with respect to these issues is that we have a responsibility to manage and cultivate, harvest the natural resources that we’ve been blessed with to truly bless our fellow mankind,” he said. In a recent interview with the Heritage Foundation’s blog The Daily Signal. Pruitt also spoke about extracting “these natural resources that we’re blessed with as a country.”

He has made these references before when he’s talked about his deregulatory work at the EPA. In order to understand this philosophy better for a profile I was writing about Pruitt, I visited his church in Broken Arrow, Oklahoma, this winter and interviewed his senior pastor Nick Garland:

The 114-year-old Broken Arrow church subscribes to a conservative branch of the Southern Baptist tradition. When dozens of evangelical leaders endorsed Pruitt’s nomination in late 2016, they wrote an open letter explaining their rejection of “any ideology that sees human beings as a blight upon the planet and would harm human flourishing by restricting or preventing the rightful use and enjoyment of creation.” This echoed a view of environmental stewardship that has become widely accepted in conservative evangelical communities: “He created human beings in His own image, bearing responsibility to advance human flourishing through many forms of human activity, from agriculture and enterprise to technology and innovation,” the religious leaders wrote. In other words, the planet’s resources are there for the purpose of human use.

I asked Garland to shed some light on the remark. “Either we’re going to steward the Earth and use it for God’s glory and man’s good, or we serve the Earth,” Garland says. Failing to use the Earth for our benefit, he notes, would violate Genesis 2:15, which concerns the relationship between humans and the natural world: “The Lord God took the man and put him in the Garden of Eden to work it and take care of it.” Garland does not believe humans are the main cause of climate change, and neither does Pruitt. “I would not agree that it’s a primary contributor to the global warming that we see,” Pruitt said in March 2017. Pruitt’s two guiding stars—evangelical faith and political zeal—sometimes seem interchangeable. In October, when he announced a controversial new “conflict of interest” policy barring researchers who receive EPA grants from serving on the agency’s science advisory boards, he quoted the Book of Joshua: “Choose this day whom you’re going to serve.”

Not only is Pruitt’s refrain on stewardship familiar, but it’s also worth noting who his most receptive audience is likely to be. Pruitt has overwhelmingly relied on a conservative echo-chamber while he shuts out mainstream reporters. As I wrote in my profile, the two constants in Pruitt’s life are his evangelicalism and his political ambitions. The EPA has proved to be fertile territory for both.