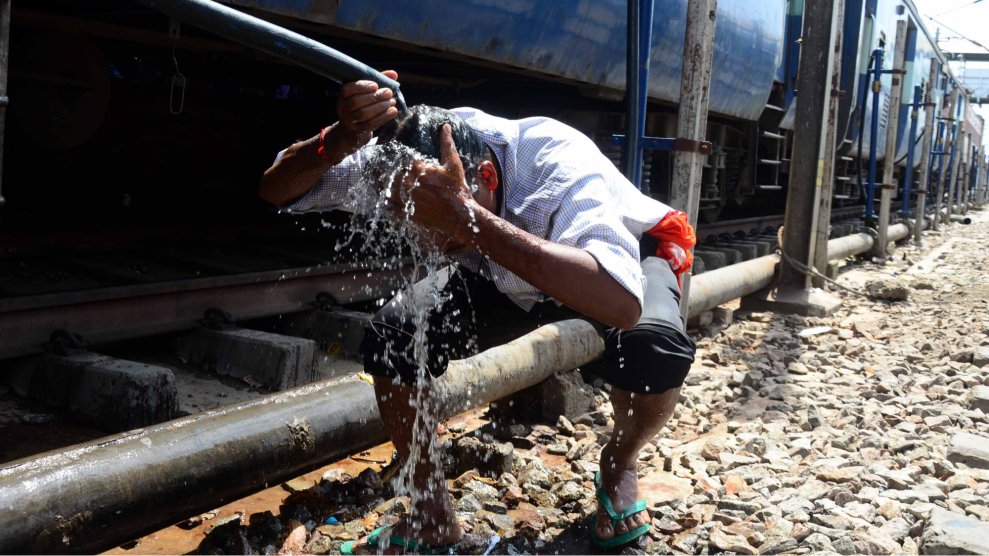 Last year was the third hottest on record, according to the National Oceanic and Atmospheric Association. We’ll probably see more of that, thanks to our warming climate: According to the most recent National Climate Assessment we’re on track to see average temperatures rise another 5 to 10 degrees Fahrenheit across the United Sates by the end of this century.

2017 also marked the first time that the United States has seen an increase in homelessness in almost a decade, according to the Department of Housing and Urban Development. The number of unsheltered people experiencing homelessness rose by 9 percent between 2016 and 2017. More than 180,000 Americans were living exposed to the elements on any single night that year.

Extreme heat is already the leading cause of weather-related death in the United States. If the number of homeless people continues to increase alongside temperatures, it will be a recipe for serious health consequences.

Several factors contribute to exacerbate the magnitude of this looming public health crisis. For one, unless we do something to curb global emissions, the National Climate Assessment says our hottest days will see increases of 8 to 15 degrees Fahrenheit by the end of this century. That means that a heat wave with a daytime high of 110 degrees today could be as hot at 125 degrees in less than 100 years. To make matters worse, a phenomenon known as the urban heat island amplifies this effect in major US cities. Not only do urban heat islands increase local temperatures, they can prevent natural nighttime cooling and raise nighttime lows.

According to researchers in the School of Geographical Sciences and Urban Planning at Arizona State University, where I also work, with continued urbanization, Phoenix’s urban heat island could cause extreme nighttime lows to increase by as much as 12 degrees, from 86 degrees to 98 degrees, by 2050, which could increase heat-related deaths in the city by 300 percent. (Disclosure: ASU is a partner with Slate and New America in Future Tense.) Surely, these effects will be felt most by people who do not have access to adequate cooling, like unsheltered individuals experiencing homelessness.

At the same time, if trends in national homelessness are any indication, there is reason to expect that a disproportionate number of people experiencing homelessness will live in major cities just like Phoenix, and a majority of those people will be fundamentally unprotected from the effects of raising temperatures. There is also evidence that the majority of unsheltered homeless populations in the country reside in warm climates. According to the same HUD report, California and Florida ranked highest in the nation for the number of unsheltered people experiencing homelessness in one state; together, they accounted for 53 percent of all unsheltered homelessness in the country.

While it may be tempting to see climate change, and weather-related hazards in general, as ‘natural’ problems, they are fundamentally attributable to social processes. This concept, often called social vulnerability, is a common framework for unpacking the effects of extreme weather on people and communities. Though scientists and politicians alike acknowledge that social vulnerability plays an important role in causing heat-related death and illness, little has been done to address the problem.

“The homeless population was subject to the injustice of disproportionately living in areas with environmental hazards, the urban heat island effect, a lack of vegetation, and a lack of adequately maintained public parks.”

Over the summer of 2016, Christine DeMyers, a Ph.D. student in anthropology at ASU spent time interviewing people experiencing homelessness in Phoenix to learn about their access to water. “The homeless population was subject to the injustice of disproportionately living in areas with environmental hazards, the urban heat island effect, a lack of vegetation, and a lack of adequately maintained public parks,” DeMyers concluded in her paper. The people she interviewed were at increased risk of dehydration and heat exhaustion—as you might expect, because they spent more time outdoors in hot places and lacked access to water that could otherwise be used to keep cool and hydrated.

According to research from the University of South Florida, in 2016, 55 percent of people experiencing homelessness in Pasco County, Florida, were concerned about their health during hot weather, yet less than half could identify symptoms associated with heat illness. Twelve percent of the people in the study also lacked access to reliable drinking water. This is even more concerning when you consider that research from the University of Toronto showed that homeless populations in developed nations were disproportionally vulnerable to the heat due to complications from other chronic illnesses.

Meanwhile, new research recently submitted for peer review to the journal Environmental Research Letters by Hana Putnam and colleagues at ASU and the Arizona State Health Department drives home the point that social interventions may matter more than direct heat mitigation when trying to protect public health. Although scientists are not able to establish when climate change causes specific weather deterministically, they can assess the likelihood that various extreme events would have happened in a pre-industrial climate vs. a modern climate.

Today, climate change has made the probability of extreme heat more likely. In that vein, summer 2016 was the fourth hottest on record in Arizona’s Maricopa County. That same summer experienced a 75 percent increase in heat-associated deaths. But the abnormal heat itself was not to blame—at least not entirely. Putnam and her colleagues estimated that according to historical temperature and mortality data, Maricopa County should have experienced approximately 80 heat-associated deaths in 2016. In reality, at least 150 people died that year.

According to historical temperature and mortality data, Maricopa County should have experienced approximately 80 heat-associated deaths in 2016. In reality, at least 150 people died that year.

So, what caused the increase in fatalities? Between 2015 and 2016, Maricopa County experienced a 25 percent increase in the number of unsheltered people experiencing homelessness. The mortality data shows that the percentage of heat-associated deaths from homeless populations more than doubled—from 13 percent to 33 percent that year. Based on these numbers, it seems likely that the increase in unsheltered homelessness played a larger role in the deaths that summer than the blistering heat itself. While climate change is going to make this problem more urgent, the solution cannot be simply to reduce emissions or plant trees. We have to care for our neighbors, fund shelters, and curb gentrification.

There are many ways you can help prevent deaths this summer. Most cities have cooling centers where people can go freely on extreme heat days. Finding out what services are available in your area and sharing that information with those in less fortunate circumstances could help save lives. If you are able to assist someone in getting to a cooler place, that’s even better. If that sounds beyond your means, cold bottles of water are always welcome when the mercury rises—carry some around and hand them out to people you walk by. In addition to water, sunscreen, sunglasses, hats, and umbrellas can help people stay cool, and bus passes or tickets to a movie can give someone an air-conditioned place to go for a while. Perhaps most importantly, if you see someone who looks passed out during a heat wave, don’t assume they are OK. Check on them or call a paramedic.

All too often we are told that individuals can fix climate change. In reality, though, climate change isn’t something easily or effectively solved with lifestyle choices. According to the Environmental Protection Agency, only 11 percent of U.S. greenhouse gas emissions are from homes and businesses. To adequately address climate change and the existing problems it exacerbates, we need to change the way our society fundamentally functions. Addressing social problems like homelessness directly may do more to mitigate extreme heat effects than emissions reductions or urban greening ever will.