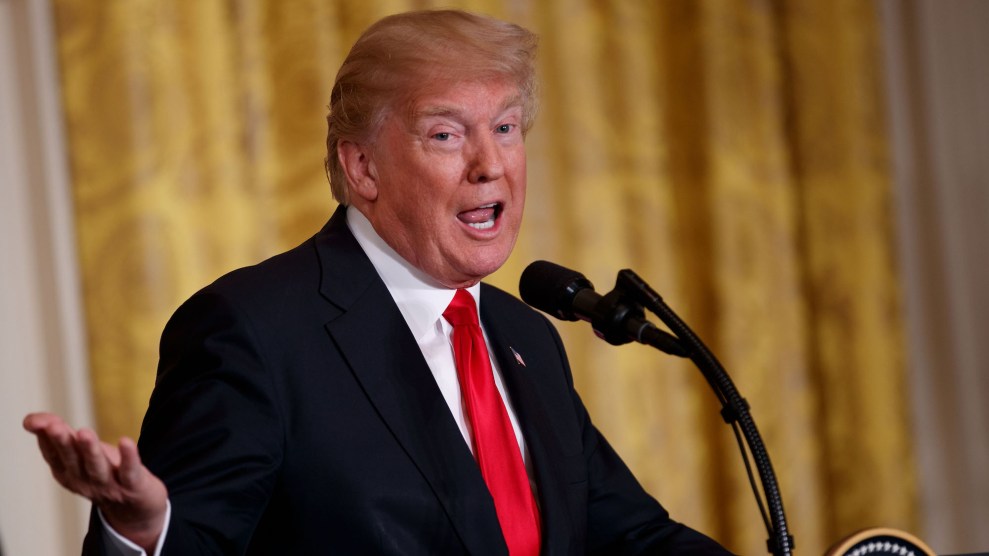 “Sea level rise” and “climate change” are not phrases Trump appointees typically use to describe anything but hoaxes. But on Monday, the acting head of the National Oceanic and Atmospheric Administration (NOAA), spoke to a crowd of more than 600 scientists, advocates, and policymakers about the agency’s commitment to studying climate change and its effect on the warming oceans.

NOAA’s acting head, oceanographer and retired Navy admiral Timothy Gallaudet, delivered a keynote address that kicked off the week-long international symposium that focused on climate and the oceans. “What NOAA is doing to inform our public to better adapt and advance our blue economy under the changing climate conditions,” he said. “We’re talking about warming of waters, changing current patterns, ocean acidification and sea-level rise. Understanding these is more important to the administration, because of what NOAA is doing in terms of advancing the blue economy.”

“To the extent that this administration focuses on anything, it’s regulations and regulators, and the science is fundamentally ignored.”

Since Trump took office, the administration has been relentlessly undermining environmental enforcement against polluters, and the science that underpins that work. Trump officials have systematically tampered with climate science at the Environmental Protection Agency, the Department of Energy, and the Department of the Interior. References to climate change have been scrubbed from federal websites; grants have been scrutinized for any mention of the word “climate;” scientists were sidelined from public outreach or barred from advisory committees altogether. Trump’s often-repeated promise to “cancel all wasteful climate change spending,” appeared to be getting closer to being fulfilled.

And then you have NOAA. It’s an autonomous agency within the Department of Commerce that’s also responsible for the National Weather Service. And it has continued its climate work, such as hosting monthly calls in which climate scientists preview their seasonal forecasts. It’s also sponsoring the fourth climate symposium held this week bringing scientists around the world to Washington, DC, for an event that predated the Trump administration.

“It’s an every-agency-for-themselves kind of thing,” says Penn State climate scientist David Titley, NOAA’s former chief operating officer and a retired Navy oceanographer. “You have NOAA pursuing a very different track than the EPA.” The difference, Titley believes, is that agencies with enforcement and regulatory powers are the real target of Trump’s administration. For example, a small fraction of EPA’s budget is spent on climate programs while the bulk of its work is on enforcing air and water regulations. In contrast, NOAA and NASA have managed to generally continue conducting business-as-usual.

That theory is echoed by Brenda Ekwurzel, Director of Climate Science at the advocacy group Union of Concerned Scientists. “There’s a big difference in enforcement and providing lifesaving information,” she says, adding NOAA’s weather models draw bipartisan support at all levels of the government.

NOAA simply might be lucky that Trump’s choice to lead the agency—Barry Myers, the CEO of the private weather company Accuweather— has stalled in the Senate confirmation process. Myers has advocated for privatizing forecasting services that NOAA provides, though he backtracked during his confirmation hearing last year, where he also said he backed climate science. But Myer’s nomination, which passed out of committee, has still not been brought for a full Senate vote. Gallaudet has taken charge in the interim, after joining NOAA in October when he was confirmed by the Senate for assistant secretary for commerce in the oceans. He’s fairly unusual among Trump appointees in that he comes with scientific credentials and is will to publicly admit that human activity is driving climate change.

While Gallaudet promised that oceans are a priority for the Trump administration, the proposed budget from the White House for 2019 paints a very different picture. It proposes cutting $1 billion, or 20 percent from NOAA, 6 percent from NASA’s earth science programs, and eliminating grants for coastal communities, including the Sea Grant Program, NOAA’s coastal research, Arctic program, and coastal management. The climate program alone would see a 37 percent budge cut for the Oceanic and Atmosphere Research.

A year after three deadly hurricanes hit the US, Trump has proposed slashing the budgets of two agencies that played a vital role in forecasting the storms, the National Weather Service and NOAA. While Trump’s proposals won’t pass, NOAA’s programs are still at risk. A House subcommittee recently passed a version that would cut several of NOAA’s core programs; the National Environmental Satellite, Data, and Information Service would be gutted by 89 percent.

In light of last year’s hurricanes, Congress has so far maintained NOAA’s spending in stop-gap spending bills, and onlookers hope for more moderation in the Senate. “I think saner heads are prevailing,” Ekwurzel said, “and we don’t want to cut that off.”