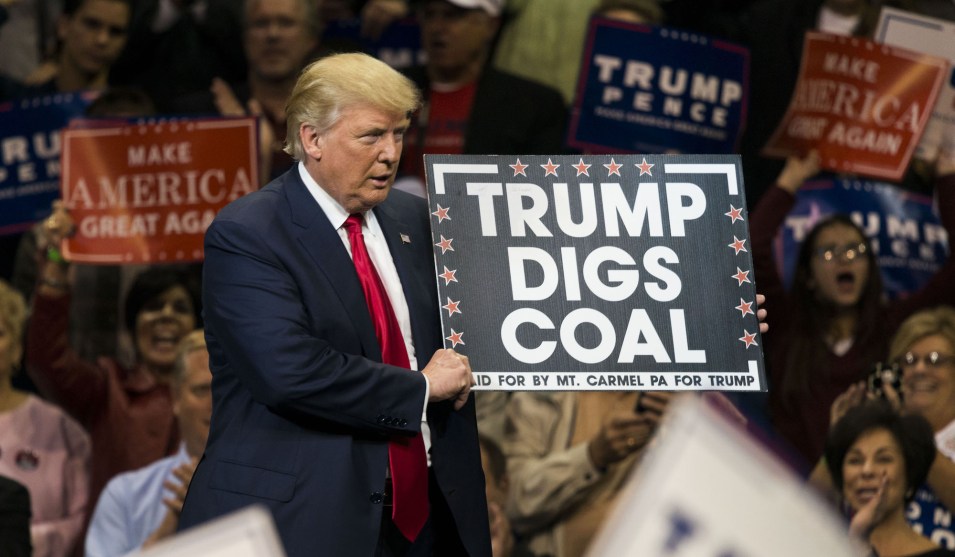 Update, 4:15 p.m.: President Trump has directed Energy Secretary Rick Perry “to prepare immediate steps to stop the loss” of coal and nuclear plants and prepare recommendations, according to a statement released Friday by the White House. While the Trump administration has not taken formal action yet, it does signal that it is moving ahead with the plan reported first by Bloomberg. The White House statement does not mention the words coal or nuclear, instead referring to “fuel-secure power facilities.”

For over a year, President Trump has tried and failed to find a legal way to deliver on his campaign promise to save the coal industry. The administration has already cycled through several proposals, none enacted, that would extend an unprecedented  lifeline to an ailing industry. The Trump administration is considering compelling grid operators to buy electricity from coal and nuclear plants that have been otherwise unable to compete with cheap natural gas and renewables.

The administration’s other attempts to prop up these industries haven’t worked, or have been rejected for being too flimsy on legal grounds. Now the administration has landed on a new angle. Bloomberg News reported that on Friday the White House National Security Council will meet to discuss a draft Department of Energy plan to bail out coal and nuclear in the name of national defense.

Bloomberg obtained the draft 41-page memo from May 29 ahead of the Friday meeting. The memo calls federal action for coal and nuclear “necessary to stop the further premature retirements of fuel-secure generation capacity,” because of national security, and proposes ordering grid operators to buy electricity from plants “to forestall any future actions toward retirement, decommissioning or deactivation” over the next two years. We don’t know yet the cost or scale of such an intervention, as 4 percent of coal plants are expected to retire just this year, and about two dozen additional nuclear plants are projected to be retired by 2021.

It also creates a “Strategic Electric Generation Reserve,” that would store fuels in the name of national defense. “US Defense Department installations are 99 percent dependent on the commercial power grid,” the memo reads, “one reason that electric system reliability is vitally important to national defense and homeland security.” Relying on two laws, the Federal Power Act and the Cold War-era Defense Production Act, the memo argues that the Energy Department has full power to order a nationwide intervention.

The details of the plan are still vague, but environmental groups guarantee there would be legal challenges if the Department of Energy goes through with the directive.

The Trump administration has abandoned a few similar proposals: Last year, the independent Federal Electric Regulatory Commission rejected Secretary of Energy Rick Perry’s proposal to subsidize coal. Perry’s argued that coal was needed to ensure the grid keeps working when there is extreme weather. When FirstEnergy Solutions, a coal- and nuclear-reliant utility was on the verge of bankruptcy, it requested an emergency bail out from DOE, but was denied.

In the last seven years, 268 coal-fired power plants have shut down or announced plans to retire, accounting for more than half of the nation’s coal plants. Natural gas in the meantime has overtaken coal as the biggest source of electricity, while renewable costs have tumbled. Since the details of the plan haven’t been fully spelled out, it’s unclear just how big a blow this could be for the growth of renewables, the affect on consumer electricity rates, and even air quality. But if implemented, Trump’s new plan would likely extend the lifespan of some of the oldest, dirtiest coal plants with the biggest pollution footprint, that otherwise can’t compete financially with cheap gas and clean energy.

When it comes to clean air, Miles Keogh, executive director of the National Association of Clean Air Agencies, sees one potential troubling situation. “The only area where this would be of concern is if it’s linked to other activities that would undermine the permits that restrict the amounts of pollution that plants like this can emit either per year or over their total life of operations.”

At least one major grid operator is unhappy:

"Any federal intervention in the market to order customers to buy electricity from specific power plants would be damaging to the markets and therefore costly to consumers. There is no need for any such drastic action" pic.twitter.com/WTYTUcxAdO

“It’s the kind of  proposal,” Moore says, “that ought to generate strong bipartisan opposition because it’s so anti-markets.”

At the same time, a coal bailout would please a major Trump benefactor, Bob Murray, CEO of the coal company Murray Energy. Murray put this item on his 16-point wishlist for Vice President Mike Pence in March 2017. Since then, the Trump administration has delivered on many of Murray’s requests. Murray Energy is a major supplier to First Energy, which asked the Energy Department for a bail out last year. Another item that Trump fulfilled from Murray’s list, exactly a year ago Friday, was announcing that the US would withdraw from the Paris climate agreement.

“We are still seeing coal plants retire at the same right under Trump as Obama, and that’s because they can’t compete anymore,” Sierra Club’s Beyond Coal Director Mary Anne Hitt says. “It’s not at the stroke of the pen that Trump and DOE can either change the fundamental economics or give these plants a lifeline to compete.” Hitt predicts that the proposal “will end up in the trash heap of other policies” the Trump administration has tried out to save coal.