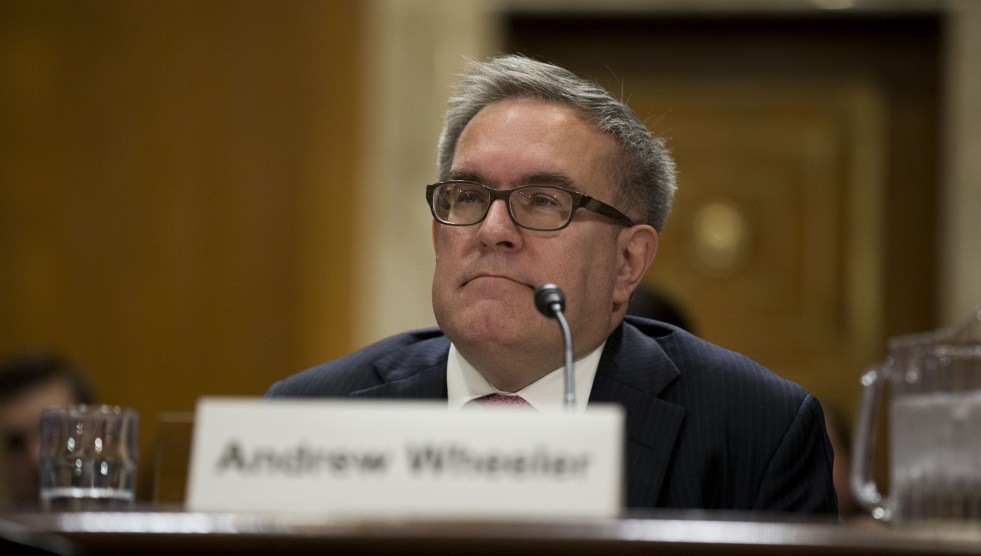 Update, (7/5/2018): President Trump accepted Scott Pruitt’s resignation today and announced that on Monday, Andrew Wheeler will “assume duties as the acting Administrator of the EPA.”

…on Monday assume duties as the acting Administrator of the EPA. I have no doubt that Andy will continue on with our great and lasting EPA agenda. We have made tremendous progress and the future of the EPA is very bright!

The Senate is about to confirm the man who would take over the Environmental Protection Agency should Scott Pruitt step down. Andrew Wheeler, an energy lobbyist who has worked for the Senate’s biggest climate change denier, faces a confirmation vote for deputy administrator, the number two position at the agency, as soon as Tuesday.

Environmentalists say that having Wheeler in place would reassure the fossil fuel industry that it still has an “inside man” for the nation’s top environmental post should Pruitt finally succumb to his mounting ethics scandals.

“It would be similar to having a tobacco lobbyist heading up the American Lung Association,” Judith Enck, an Obama-era former EPA regional administrator, said in an email. “Wheeler would continue the polluting policies of Pruitt but perhaps have the good sense not to violate federal ethics rules.”

“Wheeler would continue the polluting policies of Pruitt but perhaps have the good sense not to violate federal ethics rules.”

That’s because Wheeler has had decades of experience working for some of the biggest critics of environmental regulation, including Senator James Inhofe (R-Okla.), who has distinguished himself as the most vocal climate change denier in Congress. As a lobbyist with the firm Faegre Baker Daniel, one of his major clients has been the nation’s largest private coal company, Murray Energy, whose CEO Bob Murray has been a generous Republican donor and Trump supporter. Among his other clients are the uranium mining company Energy Fuels Resources, the utility Xcel Energy, the biofuel firm Growth Energy, and the liquified natural gas company Bear Head LNG—all of which are regulated by the EPA.

Last fall, after months of speculation over who would fill the empty post, Trump nominated Wheeler. His hearing coincided with that for the Council of Environmental Quality nominee Kathleen Hartnett White, whose nomination was pulled after protests from Democrats. But Wheeler’s nomination proceeded, and after several lengthy delays, his confirmation vote advanced out of committee in February. Pruitt’s fortunes changed dramatically since then—leaving Wheeler to take over as acting administrator.

Bob Murray has been one of the most aggressive advocates for the EPA to review its endangerment finding. This finding, which forms the scientific basis for the EPA’s regulatory climate work, considers greenhouse gasses a public health threat. Shortly after Trump was inaugurated, Murray provided the administration a policy wish list in which rescinding the endangerment was a top priority. Wheeler admitted in his confirmation hearing that he was handed the same list (Wheeler was still lobbying on behalf of the company as recently as summer 2017).

Early in his career, Wheeler spent four years at the EPA during the George H.W. Bush and Clinton administrations. Afterward, he spent 14 years in the Senate working for Senator James Inhofe and his Environmental Public and Works Committee. (Inhofe is the author of a book on climate change entitled The Greatest Hoax: How the Global Warming Conspiracy Threatens Your Future.) As Wheeler’s own biography states, he worked on “greenhouse gas emissions legislation, the Energy Policy Act of 2005, the Energy Independence and Security Act of 2007, the Clear Skies Act and the Clean Air Interstate Rule”—but he omits that Inhofe’s staff often worked to undermine greenhouse gas regulation. According to Huffington Post‘s Alexander C. Kaufman, Wheeler cultivated a reputation as a “bully” for peppering environmental regulators with what they said were politically motivated congressional probes.

Wheeler takes after his former bosses. In 2010, he wrote that a controversy where climate scientists’ emails were hacked proved that the EPA’s climate endangerment finding should be reconsidered. “While the [Obama] Administration and their allies have tried to downplay this fact over the last few weeks, the fact is that this undermines their legal position as the Endangerment Finding is challenged in the courts.” And when Wheeler appeared before the Senate Environmental and Public Works Committee last fall, he misrepresented the scientific consensus about human contribution to climate change. “I believe that man has an impact on the climate, but what’s not completely understood is what the impact is,” he told the committee.

“I believe that man has an impact on the climate, but what’s not completely understood is what the impact is,” he told the committee.

His congressional experience may mean Wheeler is more adept at navigating the controversies that have diminished Pruitt’s star in the Trump White House.

Bruce Buckheit, a consultant who was the EPA’s head of air pollution enforcement during the Clinton administration, explains that in contrast to Scott Pruitt, who was “an outsider located in Oklahoma City and new on the scene in the last few years,” Wheeler brings to the post more substantial “depth of knowledge and contacts in Washington.”

But Wheeler is still vulnerable, namely over the ties to his former clients. The Intercept recently reported that he held fundraising parties for Senators John Barasso (R-Wyo.) and Inhofe last May, after he was rumored to be tapped for EPA, breaching the wall between political fundraising and public service.

The deputy administrator is not a public face for the agency, but the position has significant power in implementing Trump’s vision of crippling environmental protection. “He would have a lot of opportunity to do long-term damage on the personnel front,” Buckheit says. Past deputies have been involved with everything from making staffing decisions, such as appointments to the EPA’s science advisory committees, overseeing operations, working with regional offices and state agencies—all of which are issues that can affect EPA staffers’ morale and work.

“The role of deputy is kind of an inside job, at least for most deputies,” said Wake Forest University’s Stan Meiburg, who served as acting deputy administrator in the Obama administration. “Our standing joke in the deputy community is we do anything the administrator doesn’t want to do.”

“Our standing joke in the deputy community is we do anything the administrator doesn’t want to do.”

Under Trump’s ethics executive order issued last year, Wheeler would not be able to participate in matters involving issues he lobbied on for at least two years. However, the White House has freely handed out waivers to officials, such as the EPA chemicals officer Nancy Beck, a former lobbyist, which allows them to work on policy that otherwise would be seen as a conflict of interest. According to ethics experts, there’s little standing in the way of Wheeler advocating for issues that may overlap with his former clients.

“Our current government ethics rules do not prevent a professional lobbyist like Wheeler from taking a leadership position in the agency that he has been trying to influence from the outside,” Kathleen Clark, a law professor at Washington University, St. Louis, said in an email. “Wheeler’s appointment to the EPA exemplifies the motto: ‘Personnel is Policy.'”

When the Senate first held his confirmation hearing, it was in a different climate. Wheeler was the man to carry out Pruitt’s deregulatory vision. Soon, he could find himself in a very different kind of role, which is why environmental groups sounded the alarm again last week on the upcoming vote.

“Circumstances have changed,” John Coequyt, Sierra Club’s senior director of federal policy, said in an email. “[The] swift and insufficient committee process that has brought Wheeler to this point must be revisited so Wheeler’s own record and dirty dealings can be scrutinized.”