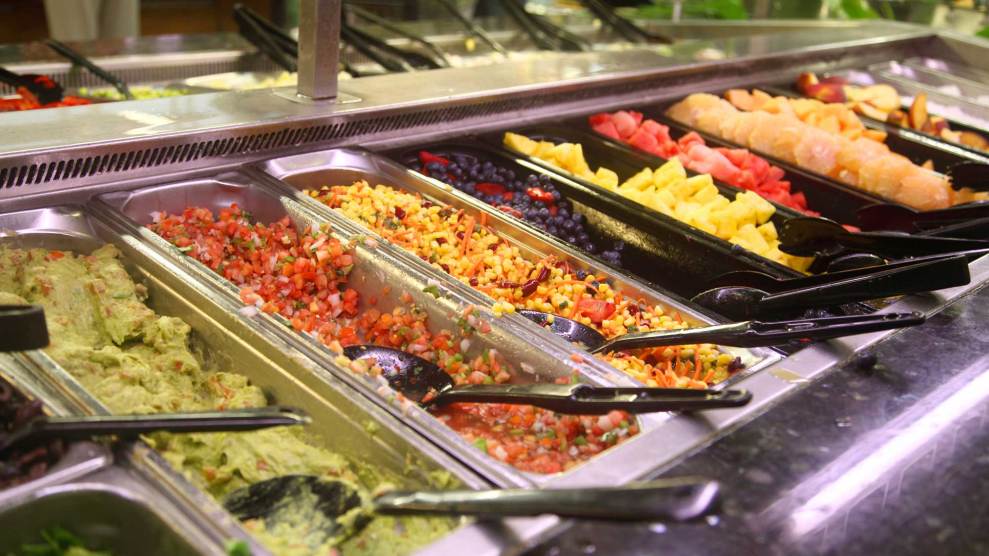 I usually pick the same time to shop for groceries as every other person in my city: at the end of the work day, when all of us are cranky and starving and definitely not that excited about the time it’s going to take for our dry spaghetti and clusters of plum tomatoes to transform into a meal when we get home. Then, as we head towards the checkout counter, another option beckons: row upon gleaming row of prepared dinner dishes, such as ready-to-eat grain salads studded with feta and pine nuts, or steaming spinach lasagna.

Between 2013 and 2015, the number of foodborne illness outbreaks from food prepared in grocery stores doubled.

Takeout meals have long been a mainstay of many small ethnic grocery stores and organic co-ops. Now, across the country, major supermarket chains like Whole Foods, Kroger, and Costco are increasingly turning to prepared foods to seduce their customers to stay for supper by building out a “grocerant,” a grocery store/restaurant hybrid. “It’s one of the few bright spots we’ve noticed” as restaurant visits have stayed flat in recent years, says Darren Seifer, an industry analyst at NPD Group, a market research company that tracks food service trends. But as supermarkets take on the added food handling responsibilities, says Seifer, they also take on new safety risks.

After the 2008 recession, people started eating out less, and restaurants have struggled to rebound ever since. On the other hand, the number of people grabbing lunch or dinner at the grocery store, or taking home meals prepared there, has risen nearly 30 percent over the past eight years. What’s the allure? They offer fresh, healthy food at even lower prices than so-called fast-casual restaurants like Chipotle and Panera, says Seifer. NPD’s research shows that the average meal receipt at a fast-casual restaurant is $7.73, while for a grocery store meal, it’s $4.18. And unlike fast-food restaurants, grocerants usually offer a plethora of fresh ingredients—easily obtained by a market that already stocks them. In many locales, meat and produce land in hot bar meals before they reach their expiration dates and have to be thrown out.

But as the number of grocerants surges, some food safety experts worry that the risk of foodborne illnesses might, too. Data from the Centers for Disease Control reveal that between 2013 and 2015, the number of foodborne illness outbreaks from food prepared in grocery stores doubled (an outbreak is when two or more people get sick from the same contaminated food). The number of people who fell ill sextupled. A CDC spokeswoman wrote in an email that the increase in outbreaks “is likely a fluctuation and may not indicate a trend.”

But Bill Marler, an attorney who specializes in food poisoning cases and founder of the website Food Safety News, says that he’s observed an uptick in incidents associated with grocery stores that decide to act like restaurants. For one thing, leaving unsealed ingredients en plein air simply makes them more vulnerable to contamination. One high profile case involved a deli at a health-food coop in Boise, Idaho, where more than 300 people grew ill from Salmonella in 2015. A local health department investigation found that chopped chicken, caprese salads, and salad bar ingredients weren’t being kept at the right temperatures, and meat in the deli’s walk-in coolers was expired. That same year, Costco chicken salad sickened at least 19 people across seven states.

The FDA alleged that Whole Foods employees had prepared pesto and mushroom quesadillas under an area dripping with ceiling condensation.

Not even upscale Whole Foods, a pioneer in the grocerant model, walks away scot free. Last June, Whole Foods co-CEO John Mackey received a damning letter from the FDA alleging multiple “serious violations” of food safety laws in one of the chain’s commercial kitchens in Boston. Among other transgressions, employees had prepared pesto and mushroom quesadillas under an area dripping with ceiling condensation, and some workers were observed assembling quinoa cakes and egg salad after doing heavier manual labor without washing their hands in between. The kitchen was forced to temporarily shut down, and in January, Whole Foods announced plans to close it permanently.

“A grocery store doesn’t necessarily have all the food safety experiences a chain restaurant would have,” Marler explains, like knowing at what temperature to keep prepared foods or for how long they stay fresh. If a cantaloupe comes in contaminated with Listeria (which causes a life-threatening infection), a careful rinse of the fruit’s rind in the home sink usually takes care of the problem. But if you’re a grocery store eager to get into the prepared-foods game, you “might cut it up in your deli, put it in case and it stays there for a week or so,” explains Marler. “All that time bacteria is growing because [Listeria] grows really well at refrigerator-like temperatures.” Plus there’s potential for any utensils or cutting boards used on that fruit to cross-contaminate other ingredients.

There’s indication that many grocers are trying to play catch up. The number of grocery store workers who’d taken an online food-safety course with the International Dairy-Deli-Bakery Association doubled from about 3,000 in 2015 to at least 6,400 last year, reports the Wall Street Journal.

In the meantime, Marler suggests a pretty simple technique for minimizing your risk of food poisoning while dining at the market: “Buy and eat things that are hot.” Food is far less likely to carry toxic bacteria once it’s temperature has been elevated. For Marler, that means nixing the salad bar. “I usually make sure I’m eating something that’s cooked beyond belief.”