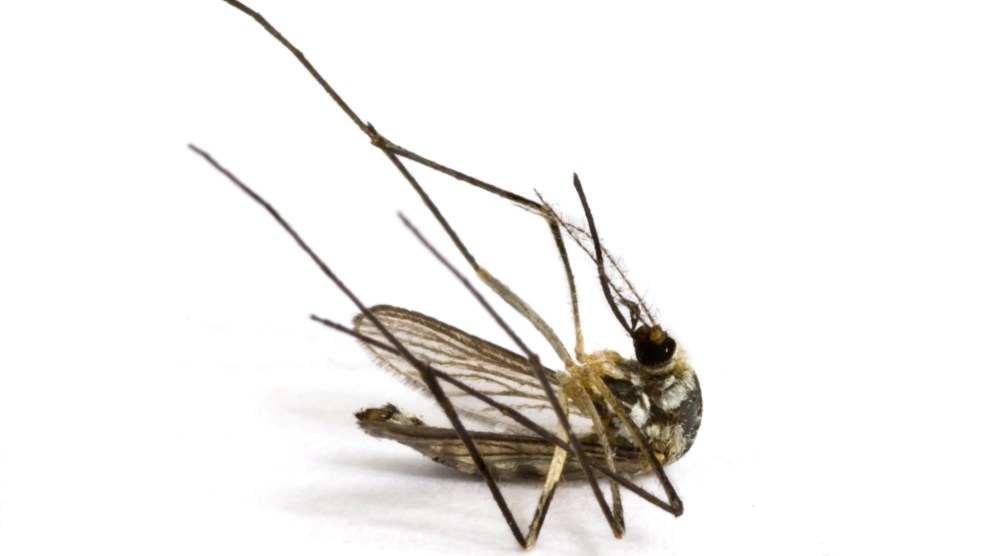 In Miami Beach, daily crowds have been gathering outside city hall to protest a program to spray a potent pesticide called naled, in an effort to combat mosquitoes carrying the Zika virus. After delays, officials began periodic naled sprayings Friday morning at 5 a.m.

People are concerned about the spraying because like other organophosphates, naled is a neurotoxin, or a poison that works by attacking the nervous system. Even at tiny doses, naled kills adult Aedes mosquitoes—which, in parts of Miami, including Miami Beach, are known to carry the Zika virus. In South Carolina last week, aerial spraying of naled inadvertently killed millions of bees.

“This is a domestic mosquito, meaning they live inside the house—in closets, under the bed, in the sink. Spraying outside won’t be very effective.”

The EPA reports that naled is regularly sprayed on 16 million acres of land in the mainland United States “as part of routine mosquito control,” including in “highly populated major metropolitan areas.” That’s a lot of land—California, for comparison, occupies 100 million acres.

Here’s what we know about naled, its toxicity to people and ecosystems, and its potential as a tool to limit the spread of Zika.

• Is naled spraying toxic to humans? The European Union banned naled in 2012, citing “potential and unacceptable risk showed for human health.” But the US Centers for Disease Control and Prevention and the Environmental Protection Agency disagree. The chemical is used at such a low rate as a mosquito spray—about two tablespoons for each area the size of a football field—that it “does not pose a health risk to people or pets in the area that is sprayed,” the CDC says. Also, “Naled starts to degrade (break down) immediately on surfaces, in water, and in sunlight,” the CDC adds, meaning it doesn’t linger after spraying.

I asked Dana Barr, a research professor at Emory who has done extensive research on the ill effects of organophosphate exposure on kids’ neural development, whether people should worry about health effects from spraying. “Likely the small amount sprayed won’t pose significant risk,” she said. Barr added, though, that people who live in sprayed areas “need to consider their exposures from other sources as well,” like through garden insecticides and residues on food. A 2015 study by University of Washington, Harvard, and University of Texas researchers found that people who eat organic food have significantly lower levels of organophosphate traces in their urine than people who don’t.

Barr added that infants and pregnant women are the most vulnerable to harm from organophosphate exposure, and should “take precautions to stay inside during spraying”—which won’t be too hard, since the spraying are scheduled for early mornings (5 a.m.).

• Is spraying naled effective at slowing the spread of mosquito-borne illnesses like Zika? This one is surprisingly hard to answer. The CDC stresses it’s just one part of an “integrated mosquito control program” that includes “eliminating mosquito habitats, such as discarded containers and rain gutters” and other actions. But the agency insists that spraying is the “one method that can rapidly reduce the number of mosquitoes spreading Zika in a large area,” like Miami beach.

In a recent editorial in the medical journal JAMA, CDC Director Tom Frieden wrote that a spraying program in New Orleans, similar to the current one in Miami Beach, had reduced both indoor and outdoor adult mosquito populations by 90 percent.

However, the New Orleans figure cited by Friedan comes from an informal study that never underwent peer review, and some experts are skeptical of it. The Aedes mosquito, the variety that hosts Zika and other nasty pathogens, tends to live indoors, making it a tough target for spraying. “I know of no published reports that support [Friedan’s] figure,” Yale University professor emeritus of microbial diseases Durland Fish told Kaiser Health News. He added: “This is a domestic mosquito, meaning they live inside the house—in closets, under the bed, in the sink. Spraying outside won’t be very effective.”

A recent news report by the University of Minnesota’s Center for Disease Research and Policy also casts doubt of the efficacy of spraying, echoing concerns raised by Fish. Back in May, Mother Jones’ Mike Mechanic did an excellent deep dive on the difficulty of beating back Aedes mosquitoes in densely populated areas.

• Will the spraying kill other bugs? While Aedes mosquitoes live mainly indoors, protected from pesticide droplets falling from the sky, other critters aren’t so lucky. The South Carolina incident demonstrated how vulnerable honeybees are to an ill-timed naled spraying.

And a Florida International University team has published three papers since 2011—in the journals Environmental Toxicology and Chemistry, Science of the Total Environment, Chemosphere—finding that butterflies are even more susceptible to naled than bees. South Florida’s butterfly populations have declined dramatically in recent years. The Florida International University research, funded by the US Fish and Wildlife Service, prompted South Florida officials to scale back routine naled spraying last year. Butterflies are a key part of the food chain, serving as prey for birds and bats; they’re also important pollinators.

When naled degrades, it turns into another potent organophosphate called dichlorvos, which in turn can linger in water, a 2014 study by University of California at Davis researchers found. Once there, it’s highly toxic to aquatic species at the “low end of the food chain,” including insects and frog larvae, one of the study’s authors, Bryn Phillips, recently told CNN.

So while people probably don’t have much to fear from naled spraying, bees and butterflies do. As for Zika-carrying mosquitoes, the jury is still out.