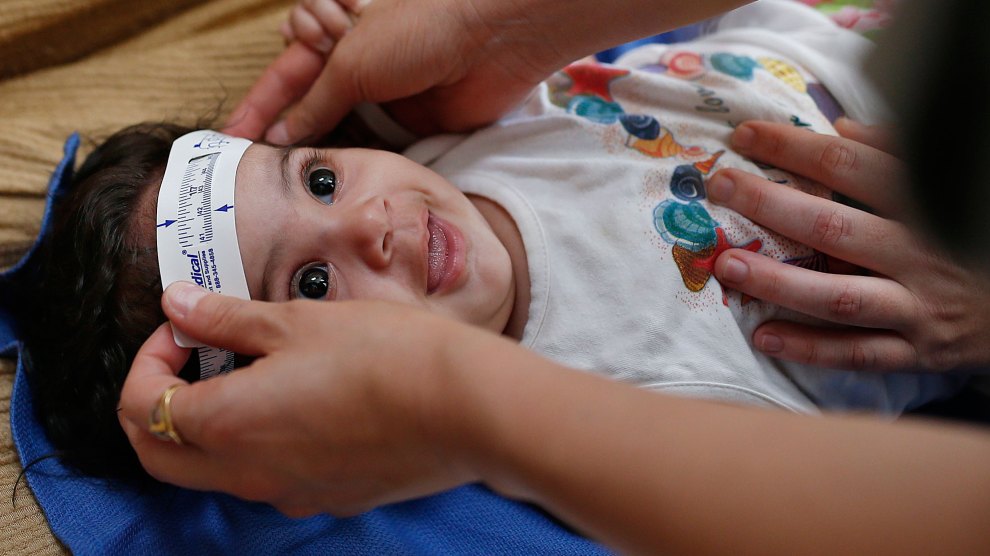 Three-month-old Esther Kamilly has her head measured by Brazilian and US health workers from the US Centers for Disease Control and Prevention at her home in Joao Pessoa, Brazil, as part of a study on the Zika virus and the birth defect microcephaly.Andre Penner/AP

Update, September 7: Senate Democrats on Tuesday blocked for the third time a bill that included a $1.1 billion Zika funding package. The vote was 52-46 with 60 votes needed for the bill to advance. Democrats objected to provisions that would seize funding from the Affordable Care Act to pay for the Zika response, exclude Planned Parenthood from receiving any of the funding, relax restrictions on the use of certain pesticides, and allow the Confederate flag to be flown at VA cemeteries. Lawmakers are now considering approving Zika funding as part of a stopgap spending bill that must be passed by the end of the month to keep the government open.

Congress returned from recess Tuesday to a crisis: the spread of Zika. Before Congress left town seven weeks ago, having failed to pass legislation granting much-needed funds to the fight against the birth-defect-causing virus, no locally transmitted infections were known to have occurred in the continental United States. Now 35 mosquito-borne cases have been reported in the continental United States (along with nearly 2,700 travel-related infections) and nearly 14,000 cases have been reported in Puerto Rico. To make matters worse, new evidence shows that Zika can be transmitted sexually, even by people who don’t exhibit symptoms. The birth defects associated with Zika were well known, but now it has been determined that even when the mother is infected in her third trimester, the virus can harm the brain of a fetus.

The White House first asked Congress to approve emergency funding for a Zika response in February. But the issue was soon mired in partisan squabbling, which culminated this summer with Democrats twice filibustering a $1.1 billion Senate bill over Republican riders that included a provision barring Planned Parenthood from receiving any of the funding. The same bill is going up before the Senate again Tuesday afternoon, where it is widely expected to fail.

The protracted battle over Zika funding has left US health agencies scrambling to find the money to address the crisis. They have managed to continue efforts until now, thanks in part to the diversion of $589 million in unspent funds (including more than $510 million left over from the $5.4 billion allocated in early 2015 to fight the Ebola virus), but in recent weeks top health officials have sounded alarms. “The cupboard is bare,” Dr. Thomas Frieden, director of the Centers for Disease Control and Prevention, told reporters last week. Dr. Anthony Fauci, the longtime director of the National Institute of Allergy and Infectious Diseases (NIAID), told Mother Jones that his agency is in the same boat. “We’ve essentially run out of money,” he said.

As Congress returns to attempt to address a crisis that has only gotten worse, here is what is at stake:

Research: At least two major areas of research will be affected—one concerning the study of Zika’s effects on pregnant women and fetuses and the other involving a vaccine to combat the drug. Health and Human Services Secretary Sylvia Burwell said last month that an NIH study of infants and pregnant women with Zika will be delayed if Congress fails to approve new funding. Similarly, NIH researchers’ progress toward developing a vaccine would be stymied if more funding doesn’t come soon. The NIAID launched a phase I trial for a DNA-based Zika vaccine in August this year, and if all goes well, an efficacy trial involving between 2,400 and 5,000 participants in areas with Zika outbreaks could begin as soon as January next year, Fauci said. But continuing work on the vaccine depends on an influx of new funds. “If we don’t get new money by the end of September,” Fauci said, “we’re going to have to dramatically slow down and even stop many of the things we’re doing.”

“If we don’t get new money by the end of September,” Fauci said, “we’re going to have to dramatically slow down and even stop many of the things we’re doing.”

Active surveillance: Stationing medical personnel in health facilities in at-risk areas to watch for patients with Zika symptoms is known as “active surveillance” and, according to Dr. Peter Hotez, dean of the National School of Tropical Medicine at Baylor College of Medicine in Houston, such surveillance is now severely lacking. Zika cases are being “identified through serendipity,” Hotez said. This could mean “what’s happening in Miami right now is actually happening in multiple areas in the southern part of the United States, but nobody’s watching for it.” Pregnant women in affected areas of the Gulf Coast might not know to take precautions and could be unwittingly putting their unborn children at risk of birth defects. An active surveillance program is not hard to implement, but it is costly, and the only viable source of funding is federal. “The county and local departments run at such low margins that they just don’t have the bandwidth to be able to take on something like this on their own,” Hotez said.

Mosquito control: While perhaps less glamorous than the hunt for a vaccine, controlling the population of potentially Zika-carrying Aedes aegypti mosquitoes is even more important in the short term. But the burden of organizing and funding this effort has largely fallen on cash-strapped state and local governments, and beyond parts of Florida with known Zika cases, little has been done. Florida mosquito control officials told the Associated Press in July that without federal funding, they would not be able to keep pace. Florida Gov. Rick Scott has criticized the president and Congress for not helping more, although Politico points out that annual state funding for mosquito control has been drastically cut under Scott’s watch.

Public education and support for local health providers: The CDC plays a key role in coordinating with local health providers on everything from ensuring diagnostic tests are available where needed to expanding support for pregnant women who might be affected and communicating with the public on what precautions to take. Without additional funding, these efforts will be in jeopardy.

International efforts: International aid was a major component of the White House’s original proposal: Out of a total $1.9 billion in Zika funding, more than $500 million would have gone abroad, says Adam Wexler, director of the global health budget project at Kaiser Family Foundation. That amount has shrunk considerably in the bills now circulating in Congress, but it still includes funding for the US Agency for International Development, the State Department, and international CDC programs. Without a detailed plan, it is hard to say what the impact of US aid would be. In a huge and comparatively wealthy country like Brazil, for example, US funding would make little difference. But according to Josh Michaud, associate director of global health policy at Kaiser, some cash-strapped nations would certainly benefit from the support. “In a country like Haiti…it might make a big difference,” Michaud said.

Research and programs to fight other diseases: Without additional funding for Zika response, local, state, and federal agencies have had to shift funding from other health programs. On the federal level, NIH has had to take “$7 million out of cancer research, $4 million out of heart, lung, and blood research, a few million dollars out of diabetes research,” Fauci said. “All of that is going to hurt the cancer, heart disease, and diabetes research effort.”

On a local level too, state and local health departments had to redirect their already limited resources. “In the highly affected areas in Florida and Puerto Rico in particular, you’ve had a lot of human and capital and financial resources directed toward the Zika response,” said Michaud, and the result is that other “important diseases” are deprived of both effort and money. A federal funding boost would allow agencies to restore funding for other health programs; its absence could mean that important public health initiatives, such as heart disease and STD prevention, fall by the wayside.

Although passing a funding bill would be a step in the right direction, Hotez from the Baylor College of Medicine warns that even if Congress approves legislation immediately, most of this year’s damage has been done. The peak transmission period for mosquito-borne viruses on the Gulf Coast stretches from July (when Congress left on recess) to September. “[The funding will] be useful for next season, but the cat’s already out of the bag,” Hotez said. “Now we’ll have to wait and see seven, eight, nine months from now, if microcephaly cases start showing up.”