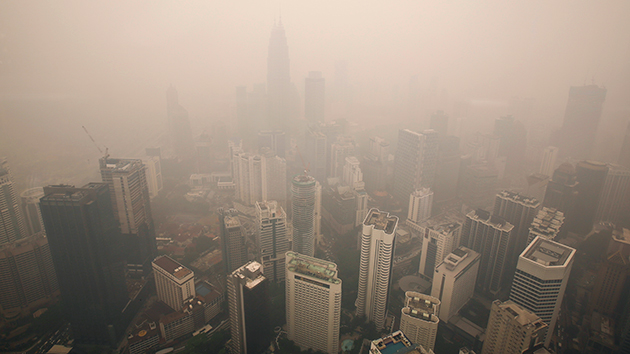 Air pollution kills 3.3 million people per year. And that number could double by 2050 if nothing is done to clean up the dangerous levels tiny particles, toxins, and ozone that blanket many countries, especially in Asia.

These are the startling new findings published on Wednesday in the journal Nature by a team of researchers led by Germany’s Max Planck Institute for Chemistry.

Children under five years of age are the leading victims in developing countries, the scientists say. In the West, most of the premature deaths occur among those over 30 years old. Air pollution—mainly tiny particles known as PM2.5—is known to lead to cancer, as well as to respiratory and pulmonary diseases.

The number of premature deaths linked to air pollution is higher than the annual death toll of HIV and malaria combined, according to the report’s lead author, Jos Lelieveld. China has the most pollution-related deaths: nearly 1.4 million each year. The authors note that mortality linked to air pollution is “approximately an order of magnitude higher than that attributable to Chinese road transport injuries and HIV/AIDS, and ranks among the top causes of death.” In other words, it’s a public health crisis of massive proportions. Toxic pollution from dirty residential heating and cooking in China, as well as in Pakistan and India, is the leading cause of these deaths.

The authors of the report emphasized the rapid growth of the world’s urban populations as a reason humans are breathing more of this toxic brew. Seventeen so-called “megacities” in Asia rank among the top 30 in terms of premature mortality, the leading one being China’s Pearl River Delta. It’s little wonder, given satellite images released by NASA this week that show how that region has become the world’s biggest urban center in just 30 years. The delta now has 42 million inhabitants:

The urbanization of the Pearl River Delta, over 30 years. NASA

But in the US, the 54,905 deaths that scientists said were related to air pollution in 2010 tended to be linked to agricultural practices: Ammonia and waste from animals combine with other chemicals from power plants and car exhaust to create the killer smog in American cities.

There are some promising signs that the study’s worst case scenario of 6.6 million deaths per year by 2050 might not come to fruition. Just this week, 11 of China’s mega-cities, along with major US metropolitan areas, pledged swifter and deeper cuts in carbon pollution, building on the landmark agreement between presidents Barack Obama and Xi Jinping. Cutting carbon pollution usually has the benefit of cleaning up the skies, since power production creates a lot of particulate pollution.

But today, there was a note of skepticism added to Beijing’s pledge to peak its emissions around 2030. (China won’t be making permanent cuts to its coal use for years, but it has proposed slowing the growth of its coal use by 2020.) Today the US Energy Information Administration said China has been using even more coal than we realized. Based on official Chinese statistics, the country’s consumption from 2000 to 2013 was actually 14 percent higher than we previously thought. China’s coal production, meanwhile, was 7 percent higher than previously believed.