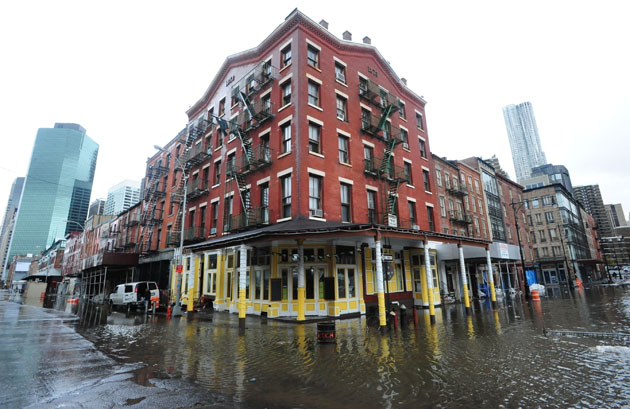 If Superstorm Sandy taught us anything, it’s that we need housing that can withstand natural disasters. But resiliency efforts often focus on detached, single-family houses and ignore larger multifamily dwellings.

Single-family owners are eligible for up to $31,900 in FEMA grants for post-Sandy repairs. No such program exists for owners of multifamily buildings. Even in co-op and condominium buildings, unit-owners cannot use FEMA grants to repair common areas or utility systems. FEMA’s single-family focus is obvious in its suggestions for flood-resilient housing, which come in the form of documents like “Avoiding Hurricane Damage: A Checklist for Homeowners.” These pamphlets include ideas like elevating structures, anchoring backyard storage sheds, and reinforcing garage doors, which apply to a very limited segment of the housing stock. New Jersey also recently announced grants for property owners to elevate their homes. This will do little for the owners and residents of multifamily buildings, which cannot feasibly be raised. 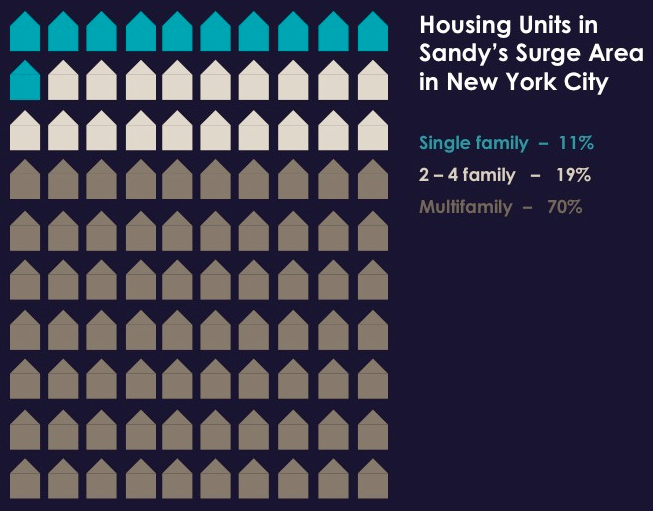 In total, these affordable, multifamily properties contain over one-third of the housing units in the surge area.

These buildings remain vulnerable to future—and inevitable—storms. That puts their tenants at particular risk. Lower-income households struggle the most to recover and rebuild after being displaced by natural disasters. It’s painfully difficult to find safe and affordable alternative places to live, especially in high-cost cities.

We need to pay special attention to protecting these kinds of homes. One way to do this is to carry out targeted retrofits. Most housing experts recommend moving utility systems off the floor and waterproofing elevators, which would reduce the risk of building damage. But even these relatively simple strategies are costly, and owners may try to pass the costs on to rent-burdened tenants or else cut back on maintenance and improvements. Many of these properties also have aging building systems, which may be difficult or impossible to move. And building codes can constrain an owners’ ability to move utility systems.

Some architects have proposed more significant retrofits, such as moving utility systems to the second floor and compensating for those lost units by adding extra floors to the tops of buildings. Another idea is using on-site landscape designs to keep flood waters at bay. However, many of these creative solutions face regulatory barriers such as height restrictions and building codes. They also come with very high price tags.

The regulations that govern the subsidies these building owners receive, through programs such as the Low-Income Housing Tax Credit or Section 8 may also limit the kinds of retrofits an owner can undertake. If nothing else, the federal programs that subsidize many of these buildings demand an additional layer of approval.

But while retrofitting multifamily buildings is a significant challenge—and urgent priority—it’s an opportunity as well. Because of their scale, multifamily buildings may actually allow for retrofitting solutions unavailable to single-family housing. For example, redundancies in basic building systems are often simply not economical for single-family homeowners, but building-level heat and power generation systems make more sense for larger buildings and can provide an alternate source of electricity if the main grid fails. The greater density of multifamily buildings may also make landscaping solutions and flood barriers more feasible and affordable, because a barrier or a planted area of a given size will protect a far greater number of people.

At a more fundamental level, multifamily buildings represent some of our most energy-efficient residential structures. Studies show that residents of multifamily housing consume far less energy than their counterparts in single-family homes due the smaller size of their units, their shared utility systems and their shared walls. In the longer run, then, investing in making multifamily housing more resilient will also help to reduce collective energy use and thereby potentially reduce associated climate risk as well.

The ongoing efforts to rebuild the areas devastated by Sandy, and efforts to prepare for future climate change related disasters must address the needs of all kinds of housing, especially the multifamily housing in which so many of our most vulnerable households live.