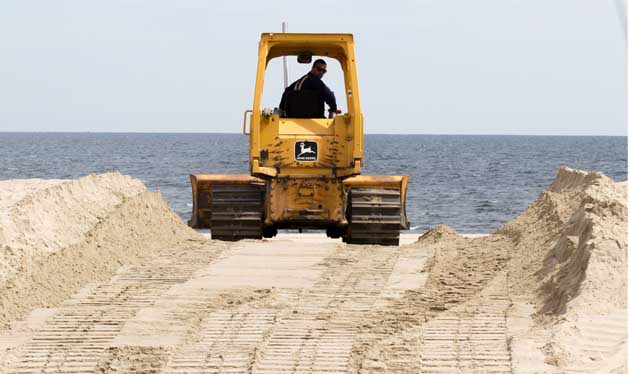 We’re quickly approaching the one year anniversary of Hurricane Sandy, the massive Superstorm that devastated towns and neighborhoods, crippled critical infrastructure systems, displaced thousands of residents, and killed at least 117 Americans along the Northeast corridor. Although the victims have been buried and the debris has been cleared, the region has by no means recovered. Cities and towns from Maryland to Rhode Island now face the daunting challenge of rebuilding—or, rather, pro-building, since they must prepare for the increasingly frequent and ever-more violent weather that comes with climate change.

We need to develop new, creative designs for shoring up the region’s defenses.

Sandy revealed major vulnerabilities across the region’s built environment, from inadequate storm surge protection in small beach communities to frail energy grids and flood-prone public housing. Three months after the catastrophe, Congress passed a $50.7 billion disaster relief package, which includes billions of dollars for rebuilding housing, commercial facilities, and infrastructure. But to copy-and-paste what had been in place before would be grossly irresponsible. We need new, creative designs for shoring up the region’s defenses. We must build more resilient physical and social infrastructures, so that we’re better able to withstand the next big heat wave or storm, and bounce back after it passes.

To help stimulate innovative plans, this summer the Hurricane Sandy Rebuilding Task Force launched Rebuild By Design, an open, global competition in which multidisciplinary teams of architects, engineers, planners, social scientists, and civic organizations develop proposals for what that future region should look like.

Rebuild By Design encourages plans for the regional scale, rather than the municipal or state level, because many of the risks related to extreme weather events require cooperating across political boundaries. Consider, for instance, the patchwork of coastal defense systems on Long Beach Island in New Jersey, where some towns were protected by sand dunes while others were left exposed due to hyper-local dissent. Or the transit, communications, energy, and sewage systems, where breakdowns in one location have catastrophic impacts on others, and—however much they prize autonomy—citizens, communities, and corporations share linked fate.

In the first stage of the Rebuild By Design competition, 148 teams submitted preliminary ideas, from which the Task Force selected ten finalists. These ten teams are now conducting an analysis of the region’s needs and vulnerabilities, with assistance from a network of scholars, community leaders, and local stakeholders, and oversight from New York University’s Institute for Public Knowledge. This will include a series of regional site visits with a community engagement process, beginning on September 12 at Trinity Wall Street, and continuing with events in Asbury Park, New Jersey; Staten Island, New York; and Bridgeport, Connecticut.

Over the coming weeks, The Atlantic Cities will be posting original articles from Rebuild By Design’s panel of experts and the participating teams. Each contribution will present different priorities to consider as we move toward designing a more resilient future.

Resilient design cannot be a one-size-fits-all approach. Taking this into account, Rebuild By Design is not setting out to solve a regional problem with a single solution—changing a city’s building code or engineering a “superdam.” Instead, it will be a dynamic, adaptive process, at the end of which will emerge a catalog of designs that address specific challenges and that can be implemented across the region.

The process itself is an act of design that establishes a new model for innovation, generating a large set of promising ideas that the region could draw upon in this and other rebuilding initiatives. Though formally a competition, the goal is to implement all of the best results from across the field of final teams, and in recognition of this the teams are participating in a collaborative research process that adds to the scope and depth of their findings.

This intensive research process will result in publicly available analyses of the Sandy-affected region, as well as three to five opportunities for design interventions proposed by each team. These proposals will then be evaluated against the Task Force’s strategy as well as principles from the federal Community Development Block Grant Program for Disaster Recovery. This assessment will guide HUD’s selection of the designs each team will develop during the third phase, to be overseen by the Municipal Art Society, Van Alen Institute and the Regional Plan Association. Refined through this third phase, the designs can then be implemented by municipalities across the region in site-specific ways.

The significant climate-related risks faced by regions around the U.S. demand that we escape the cycle of building and rebuilding after these devastating events. To do this, we will need to develop and implement truly groundbreaking ideas, which can only come from the broadest possible coalition of partners. The stakes are just too high to do otherwise. So, to this very collaborative Rebuild By Design process, we are now delighted to welcome readers of The Atlantic Cities.