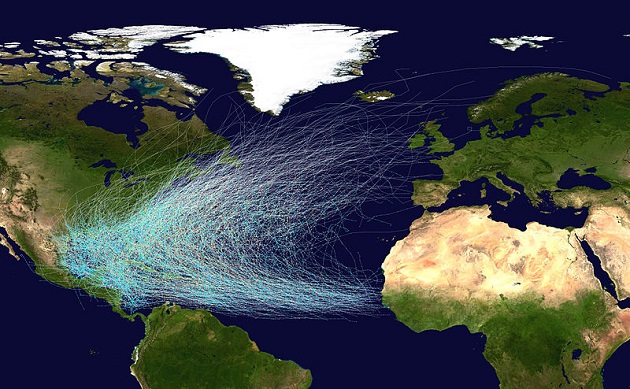 The tracks of all Atlantic hurricanes from 1851 through 2012. So far, 2013 would add nothing to this image: There haven't been any hurricanes.<a href="http://en.wikipedia.org/wiki/File:Atlantic_hurricane_tracks.jpg">Nilfanion</a>/Wikimedia Commons

From a PR standpoint, it was surely an ingenious idea: Let’s name hurricanes after leading members of Congress who deny that humans are causing global warming! That’s the gist of the “Climate Name Change” campaign that launched last month, and the promotional video has already garnered over 2 million YouTube views.

There’s just one problem: Thus far this season, the hurricanes haven’t shown up. In fact, the dearth of hurricane-strength Atlantic storms up until now, despite blockbuster pre-season forecasts, counts as downright mysterious. “We’ve never seen this level of inactivity with the ocean conditions out there now,” says meteorologist Jeff Masters, who is co-founder of Weather Underground, a popular meteorological website. There has even been speculation that 2013 might rival 2002, a year in which the first hurricane of the season didn’t form until September 11.

Meanwhile, a new scientific paper suggests that climate change will decrease, rather than increase, the likelihood that Superstorm Sandy-like storms—atmospheric black swans that take left turns towards the US East Coast—will strike in the future. And a leaked draft of the UN’s forthcoming Intergovernmental Panel on Climate Change report has significantly downgraded our confidence in the idea that global warming will lead to more intense hurricanes (or, is already doing so).

It’s more than enough to make a reasonable person wonder: What the heck is up these days with hurricanes—and with global warming’s supposed influence upon them? And do scientists know anything for sure about this, or are they just sticking out a finger in the (very fast) wind?

Why no hurricanes so far this year? It’s September, tropics! There’s no getting around it. We are very near the seasonal peak of hurricane season, and we have not yet logged a hurricane. That’s weird.

Indeed, the climatological peak for hurricane activity in the Atlantic Ocean is September 10, as you can see in this helpful image from the National Hurricane Center:

Climatology of hurricanes, by date, in the Atlantic. National Hurricane Center

So what’s up with this year?

There are a variety of factors that are known to make for quiet Atlantic hurricane seasons—particularly the occurrence of El Nino conditions (as occurred in 2002) in the Pacific Ocean, characterized by very warm tropical ocean waters. But this isn’t an El Nino year. Meanwhile, other relevant phenomena currently out there in the atmosphere—a lot of dry air coming off the Sahara Desert, for instance, and a general sinking of air over the tropical Atlantic—don’t seem as if they, alone, can account for the lack of activity. “As air sinks, it compresses, warms, and dries out,” explains Jeff Masters—and that’s not generally conducive to the rising air of hurricanes. “But that doesn’t seem like it should be enough to explain why its been so quiet,” Masters continues.

The truth is that scientists and forecasters don’t really know what caused the lull during this season—which underscores the ongoing tentativeness of our understanding of what sparks individual hurricanes, and what causes their seasonal variability in general. 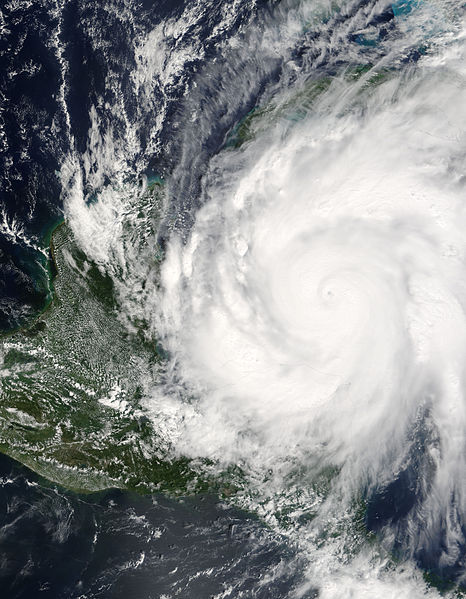 What does that say for predictions of worse hurricanes due to global warming? Given this uncertainty about a single hurricane season, maybe it’s no surprise that while the relationship between hurricanes and global warming has been studied for decades, unambiguous and uncontested scientific answers have been hard to come by. For years, scientists have argued that warmer ocean waters ought to lead to more powerful hurricanes: After all, the oceans are a hurricane’s energy source. It seems straightforward enough, but debates have raged nonetheless, particularly about whether we can detect any changes to hurricanes that have happened already.

And now—as Andrew Revkin reported—a leaked draft report of the United Nations’ Intergovernmental Panel on Climate Change’s forthcoming Fifth Assessment Report seems to have downgraded the level of scientific certainty about global warming and hurricanes in a couple of ways.

Back in 2007, the IPCC said it was “more likely than not” (meaning, a greater-than-50-percent probability) that human activities—through global warming—were contributing to an observed intensification of hurricanes in at least some regions of the globe. Now, by contrast, the IPCC says it has “low confidence” that this is happening. (For the IPCC’s extensive explanation of its official terminology for expressing degrees scientific certainty, see here.)

How did the science get less certain? There’s an intense scientific debate going on here, and new research conducted since 2007 has given indications that the hurricane picture under climate change may be more complicated than previously supposed. That’s because even as warmer oceans provide jet fuel for hurricanes, changes in atmospheric wind patterns can still interfere with their formation by preventing storms from forming or, literally, tearing them apart.

In particular, the IPCC in its latest round likely took note of a major 2010 paper in the journal Nature Geoscience, authored by no less than 10 hurricane experts, finding that “it remains uncertain whether past changes in tropical cyclone activity have exceeded the variability expected from natural causes.” It’s also important to keep in mind how the IPCC works: There’s a cut-off date for assessing the existing scientific literature to be included in each report, and work published after the deadline just doesn’t get taken into account.

When it comes to hurricanes, that’s quite problematic, because several papers have emerged after the deadline that do suggest that global warming will dramatically impact these mega-storms. That includes a new paper by MIT hurricane expert Kerry Emanuel, suggesting that across the globe, hurricanes will be both more numerous and also more intense under global warming. There’s also a new paper by another top hurricane-climate expert, Greg Holland of the National Center for Atmospheric Research and one of his colleagues, finding that hurricanes have already shifted toward more Category 4s and 5s (and fewer Category 1s and 2s) under global warming.

Fewer Sandys in the Future? Meanwhile, another scientific fog arises as a result of a new paper just out in the Proceedings of the National Academy of Sciences, suggesting that storms like Superstorm Sandy—which has been widely linked to climate change in popular discourse—might be less likely, rather than more likely, in the future.

First, it’s important to lay out the case for why global warming may have been linked to the freakishly unusual path taken by Sandy. The argument begins with the work of Rutgers University climate scientist Jennifer Francis, whose research suggests that the rapid-fire warming of the Arctic is affecting weather in the mid-latitudes through its influence on the jet stream, the gigantic river of air that flows in waves from west to east. More specifically, Francis says the jet stream is slowing down and growing more loopy and that this, in turn, is leading to what you might call “stuck” weather or blocking patterns. One such blocking pattern, a high pressure ridge over Greenland, shaped Sandy’s turn toward the East Coast.  (For a detailed presentation by Francis, see our 6/6/13 “Climate Desk Live” event that featured her as a speaker.)

“It’s awfully suspicious that we had a 1-in-700 year event after the summer that we had the record sea ice loss in the Arctic,” explains Jeff Masters. “And we have a theory relating Arctic sea ice loss to blocking systems of the kind that steered Hurricane Sandy into the coast.”

Francis’s views have been contested by other researchers, however. And the new study uses a suite of climate models to suggest that such atmospheric blocking patterns will be less frequent, rather than more frequent, in the future. Francis, however, questions the latest results. “The authors acknowledge that the realism of climate models in simulating blocking patterns is uncertain and that most underestimate the frequency of their occurrence in the North Atlantic,” she commented by email in reaction to the new study.

What scientists do know. In the 1970s, when Congress was debating the safety of the proposed supersonic transport program, Maine Senator Edmund Muskie had just heard conflicting scientific testimony. “Will somebody find me a one-handed scientist?” Muskie allegedly exclaimed. That, at least, would put an end to all the “on the one hand, on the other hand.”

But we don’t need any amputations to figure out some things that we can indeed say about hurricanes and global warming. Principally this: While scientists sort all this out, sea levels continue to rise due to global warming. The picture here is very clear. And that means that every single hurricane that hits land will push seawater farther inland when it does so. Or as one scientist told me in the wake of Sandy, “There is 100 percent certainty that sea level rise made this worse. Period.”

And then there’s the warming of the oceans, which leads to two more clear conclusions, according to Masters. Warmer oceans make hurricane seasons longer, and they also make it possible for storms to travel north. The first idea is supported by published research suggesting an increasing frequency of late-season storms like Sandy (persisting into November or later), and the latter is simply a deduction from principles of physics: If oceans are hotter, hurricanes are more likely to be able to travel north out of the tropics and still have their energy source sustained.

And that, it seems fair to say, is more than enough to worry about.