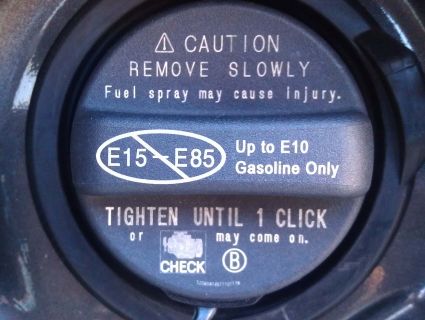 After years of debate—and I’m not exaggerating on that—my husband and I finally bought a car. We settled on a Prius C, a pint-sized younger sibling of the iconic originals that gets 53 miles per gallon.

I drove the car for weeks before I finally had to stop at a gas station. When I pulled open the door to my tank, I found a stark warning sign on the cap telling me I was NOT to put any gasoline blend higher than E10 in my tank.

E10 means gasoline with a 10 percent mix of ethanol, generally derived from corn, and it used to be the highest blend of ethanol allowed in the United States. Ten states require all gas to include 10 percent ethanol. About 80 percent of the gasoline consumed in the US is blended with ethanol, according to the industry’s trade group, the Renewable Fuels Association. Most of us—myself included—don’t pay a lot attention to what gas we’re pumping into our cars, outside of “diesel” or “unleaded,” and might not have realized that we are already pumping corn into our tanks.

But we’ll have to start paying attention soon, as the Environmental Protection Agency has approved a new policy that will allow states to raise the blend to up to 15 percent ethanol (also known as E15). The EPA says the fuel is approved for use for cars and light trucks from the model year 2001 and later.

Individual states will have to determine whether they want to raise their blend, but the EPA’s decision will allow them to do so if they choose. Midwestern, corn-producing states are expected to be the first to increase their blends. Right now, there are only 10 stations offering E15 as an option—all of them in Kansas, Iowa, and Nebraska.

I hadn’t really thought about E15 much before seeing the gas cap on my car. And as I went to pump gas in my car, I realized I had no idea what the current rule was in that state (which happened to be Maryland)—there were no signs on the pump. So what am I supposed to do when states start rolling out E15, with my car clearly telling me not to fill ‘er up with that stuff? What will it actually do to my car?

I’m not the only one who is concerned. A few weeks ago, AAA issued a statement saying that the EPA’s new policy creates the “strong likelihood of consumer confusion and the potential for voided warranties and vehicle damage.” The worry is that people will put E15 in their cars without realizing it. AAA surveyed vehicle manufacturers, and found that only about 12 million of the 240 million vehicles on the roads today are built to use E15 gasoline.

Automakers are also warning against using E15. BMW, Chrysler, Nissan, Toyota, and Volkswagen have all said that their warranties do not cover problems caused by using E15, and another eight companies have said using it may void warranty coverage, if they determine that’s what caused the problem. 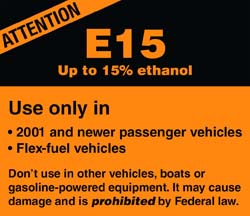 The EPA will require that gas pumps with E15 bear a warning sign noting the blend and that it is not recommended for cars older than the 2001 model year. But what happens if I accidentally use it?

Brian Lyons, Toyota’s safety and quality communications manager, told me that the problem is that “nobody really knows what negative effects [E15 is] going to have on the vehicle.” While the company is now working on cars that can run on the new blend, the existing models weren’t built for that.

It’s not that filling up with E15 one time will screw up my engine, Lyons said. Rather, the concern is that repeated, long-term exposure could cause the higher-alcohol-content fuel to degrade engine parts like valves and cylinder heads—which could potentially cost thousands of dollars to replace. Short-term, I may notice that my car isn’t performing as well. My “check engine” light might come on. And it could keep coming on, repeatedly, which is probably more annoying than dangerous.

“We think that there needs to be a lot more study conducted to make sure there are no longer term effects on the vehicle,” Lyons said. “So far everything we’ve seen says there will be.”

Okay, so Toyota doesn’t like the new rule. Gas station owners don’t like it very much either, because they’d likely have to upgrade their equipment to use it. Nor are environmental groups big fans of the EPA’s decision. For one, they note that using corn ethanol creates many of its own environmental problems. The Environmental Working Group also argues that increasing the use of ethanol can drive up food prices, and isn’t the best means of reducing our reliance on foreign fuels.

The only group that really seems to like the new rule is the ethanol lobby.

“We’ve force fed a fuel into every American’s car that benefits a few thousand corn farmers and ethanol refiners at the expense of virtually every other American,” EWG’s vice president of governmental affairs, Scott Faber, told Mother Jones.