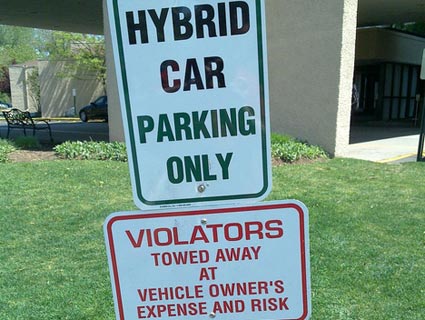 After five car-free years, I am finally considering buying a vehicle. But which kind of car is best for the planet?

Yeah, yeah, I am well aware of the fact that the most environmentally sound decision would be to not buy any car at all. But there are some things that bikes just can’t do. They can’t haul big stuff (though I’ve schlepped some impressive-sized things on my bike). And the bike can’t get me to North Carolina or New Jersey, the respective native lands of my partner and me, unless we plan a few extra days of travel. And while I like living in Washington, DC, I do occasionally want to get out and see a tree or two.

I’ve gotten conflicting reports about whether it’s better to invest in a hybrid or opt for an extremely fuel-efficient conventional auto instead. It’s not an easy question to answer, since much depends on your driving habits, where you live, and what kind of money you have. The sticker price of most hybrids is still a major barrier—I work at a nonprofit magazine and my partner is an academic, so a $10,000-plus difference is significant to us. And most of our car trips are longer ones, meaning we wouldn’t see quite as much advantage from a hybrid as people who use it to commute daily in a relatively small area.

The upfront cost of a new Prius is still pretty high: The average price ranges from $25,000 to $35,000 for the 2011 model. Because of the high demand for them, even a used Prius is still pretty expensive, with one of the highest resale values. (I’ve even heard stories about people reselling them for more than they spent in the first place.) There are, of course, other types of hybrids: On the US News & World Report ranking, the hybrid Ford Fusion places pretty high up there at a cost only slightly higher than the Prius, as do the Honda CR-Z, Toyota’s Camry hybrid, and the Hyundai Sonata hybrid.

The fact of the matter, though, is that if I get a Prius, I wouldn’t be taking advantage of its hybrid abilities all that much. My trips would be too long, and its electric capacity is really better suited for short trips or stop-and-go traffic. So rather than go for a hybrid just because it sounds like a better option, I should look at the overall fuel economy for both city and highway driving. “In the end, mileage is mileage,” says Jim Motavalli, a writer whose car coverage is regularly featured in the New York Times. His book on plug-ins, High Voltage, is coming out in November. “The fact that a car is a hybrid does not in and of itself make it cleaner.”

Motavalli drives a 2007 Honda Fit that gets about 35 miles per gallon, which he says he’s found to be among the best options out there. The 2011 models start at $15,100, which certainly puts it closer to my price range. The Hyundai Elantra and Ford Fiesta also get a similar miles-per-gallon rating in that price range, and you can see the EPA’s detailed ranking of fuel economy for others.

Looking at the side-by-side comparison of cars and prices and thinking about my driving habits, I was pretty sure I wanted to go with one of the highly-efficient small cars on the market. But there’s another factor that I hadn’t really considered: My purchasing habits do have effects beyond the amount that I personally drive. If I buy a hybrid, in my own small way I am sending a signal to the market that people want more hybrids. This drives carmakers’ decisions to produce more and different hybrid options. And as more people drive hybrids, the sticker price will eventually go down, making them cheaper upfront. And there’s the other, harder-to-measure consideration, which is that the more people who drive hybrids, the more they’ll be seen as “cooler” or even, at some point, just “normal.”

“The success of any product is based on consumers buying it,” says Wade Newton, a spokesman for the Auto Alliance, the trade group representing US automakers. “[Car companies] put a portfolio out there and see what the consumer chooses.”

Hybrids have certainly grown in popularity in recent years. In 2010, there were 30 different types of hybrids on the market, says Newton.* But manufacturers have only sold 2 million hybrids in the past 11 years, and with 246 million cars on the road across the US, that means hybrids are only 0.8 percent of the fleet. So my buying one could actually have some impact in the market.

I’m still pondering what to make of this exercise. In the meantime, we’ll continue using ZipCar for our short trips and renting cars for our longer ones, which has served us pretty well for the past five years. If you have thoughts on the best solution, weigh in below.

*This figure has been corrected since this article was orginally posted.