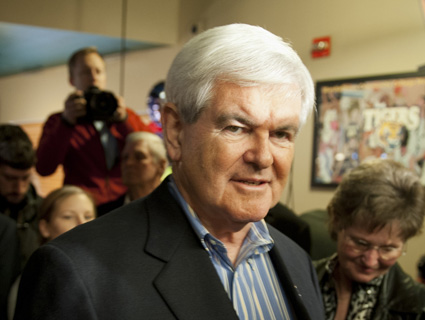 It’s no secret that Republican presidential contender Newt Gingrich has had a soft spot for climate change in the past. He sat on a couch with Nancy Pelosi talking about how we can all work together to solve global warming. He even wrote a book about our collective obligation to care for the planet, the sequel to which is currently in the works. But now that he’s running for the GOP nomination, Gingrich has cooled on global warming—and cut a chapter about the topic by a distinguished climate scientist from his new book.

A sequel to his 2007 A Contract with the Earth, the new book describes how environmentally minded businesspeople can save the planet and will likely be called Environmental Entrepreneurs. It has been in the works for years, but isn’t expected to be released until after the 2012 election; that’s probably not a big surprise given that releasing a book about the environment in the middle of a campaign for a Republican nomination probably wouldn’t help him all that much.

Last week, though, Gingrich told an Iowa voter that he’d decided to drop a chapter by Katharine Hayhoe, a professor of atmospheric sciences at Texas Tech University. The voter said she was worried about the chapter, which she’s heard about on Rush Limbaugh’s radio show a few weeks ago. Rush was aghast that Gingrich’s book would include a chapter from a scientist who “believes in man-made global warming.” Before the voter could finish laying out her complaint, Gingrich cut in, assuring her that he’d eliminated the chapter entirely. “That’s not going to be in the book,” says Gingrich in a video from National Journal. “We didn’t know that they were doing that, and we told them to kill it.” (“They” likely referring to his coauthor and the book’s contributors.)

Later, a reporter called to confirm Newt’s statement with Hayhoe. She said she had never been informed that her chapter had been cut. In fact, she had never talked directly to Gingrich. She also hadn’t heard anything from Gingrich’s coauthor, biologist Terry Maple, who had asked her to write the chapter in 2007 after the two met at a panel shortly after A Contract with the Earth was published. Hayhoe finished the chapter back in 2009, and assumed it was going to be published. After Gingrich’s comment last week, she reached out to Maple, who confirmed that her chapter had, in fact, been spiked.

The trouble for Hayhoe seems to have started in earnest when Limbaugh used his radio show to talk about the chapter from Hayhoe, whom he referred to as a “climate babe.” Limbaugh’s guest for the day was Marc Morano, the former staffer to Senate climate-denier-in-chief James Inhofe (R-Okla.) who now runs the blog Climate Depot. Morano has posted numerous attacks on Hayhoe in the past month and provided her email address so his readers could contact her. (Media Matters has tracked those attacks as well.) She’s been receiving loads of hate mail ever since.

“It’s just really sad that people would feel they have to go out of their way to say really nasty, mean things to somebody that they’ve never met,” she says.

But the denial crowd has picked a tough opponent in Hayhoe. Her credentials are impeccable: a Ph.D. in atmospheric sciences from the University of Illinois and a long list of fellowships, awards, and publications. She was an expert reviewer for the Nobel Prize-winning Intergovernmental Panel on Climate Change 4th Assessment Report.

Yet she approaches climate science from an interesting point of view. She’s an evangelical Christian, a mother, and the wife of a pastor. In 2009, Hayhoe and her husband coauthored the book A Climate for Change, a book about “global warming facts for faith-based decisions.” She spends a lot of her time talking to people of faith about why they should care about climate change. She currently lives in Lubbock, Texas, but she’s originally from Canada and doesn’t vote in the United States—and she’s pretty glad not to have to deal with American politics too much, anyway.

All of this makes her a somewhat more difficult target for deniers, who have been busy smearing her on their blogs since Limbaugh mentioned her. “I’m happy to stand up and say I’m a Christian, I attend a Bible church,” says Hayhoe. “In the past they’ve really tried to paint scientists as godless liberal treehuggers, so they could get people to dismiss them by attaching those labels.”

Hayhoe vented on Twitter a bit last week about “so much ‘spare’ time wasted” on the chapter that could have been spent with her family and the “ungracious way” she found out about Gingrich killing the chapter. In an interview with Mother Jones this week, she was more circumspect. She’s sure the chapter will find a home in another book, at some point. And she thinks it’s less Gingrich’s fault than it is that of the broader political climate in which Republican presidential candidates feel they have to ignore science to get elected, she says. “I completely understand,” Hayhoe says. “It’s just one more symptom of how this debate has gotten so polarized and unproductive.”