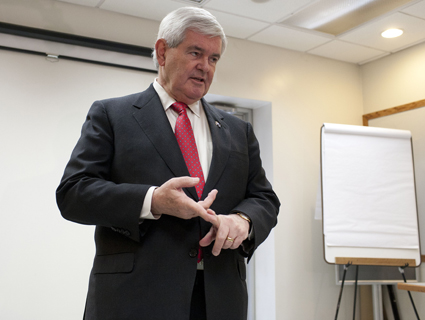 When House Democrats refused to seat Indiana Republican Rick McIntyre in 1985 because of an ongoing recount, Newt Gingrich was quick to cry foul. When Democrats eventually seated McIntyre’s opponent, Frank McCloskey, who won by just four votes, Gingrich scanned the pages of history to put the event in its proper context. He settled on the Holocaust.

As he explained in a floor speech:

We have talked a lot in recent weeks about the Holocaust, about the incredible period in which Nazi Germany killed millions of people and, in particular, came close to wiping out European Jewry. Someone said to me two days ago, talking frankly about the McIntyre affair and the efforts by the Democratic leadership not to allow the people of Indiana to have their representative but, instead, to impose upon them somebody else, something in which he quotes [German poet Martin] Niemoller, and I have never quite until tonight been able to link it together—Niemoller, the great German theologian, said at one point: “When the Nazis came for the Jews, I did nothing…and when the Nazis came for me, there was no one left.”

And when the Nazis came to Indiana, we did nothing, because that never happened. Gingrich hasn’t mellowed with age, either. When he failed to meet the requirements for the Virginia ballot last week, his spokesman told the press that “Newt and I agreed that the analogy is December 1941″—Pearl Harbor.