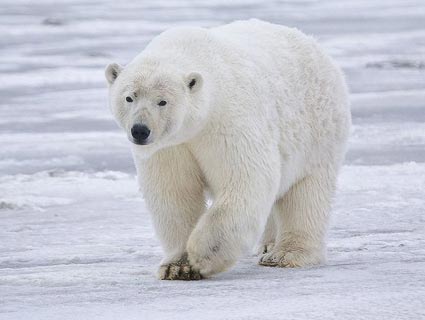 Everything you’ve been told about polar bears and global warming is a lie. Or at least that’s what climate skeptics have rushed to claim in response to the news that the government is investigating a scientist who wrote a significant paper five years ago about drowned bears in the warming Arctic. Charles Monnett, a wildlife biologist with the Bureau of Ocean Energy Management, Regulation, and Enforcement (BOEMRE) in Alaska, has been placed on administrative leave as the agency’s inspector general undertakes an investigation into unnamed “integrity issues.” But an environmental watchdog group believes that the real reason for the investigation is pressure from oil and gas interests who see polar bears as pests that stand between them and the vast mineral reserves deep beneath the Arctic.

The details of the investigation are odd, to say the very least. On February 4, 2011, Monnett received a request for an interview from Eric May, a criminal investigator with the Office of the Inspector General at the Department of the Interior. May and another agent interviewed Monnett on February 23, 2011, in the Anchorage office of BOEMRE.

From the transcript, provided to Mother Jones by Public Employees for Environmental Responsibility (PEER), it’s clear that the interview focused largely on the polar bear paper, with the agents asking questions about his methodology and conclusions. The paper, published in the journal Polar Biology in 2006, documented four dead polar bears in the Beaufort Sea during the course of an annual whale survey in September 2004. It was the first paper to document dead bears, and Monnett and his coauthor projected that there would likely be an increase in bear deaths as sea ice declined in the region. During their conversation, Monnett noted that the paper was reviewed both internally at Minerals Management Service (now known as BOEMRE) and by scientists outside of the agency, and it was approved by MMS management before they submitted it to the journal. At the journal, it was reviewed by three anonymous peer reviewers and approved for publication.

At no point in the course of the interview, which lasted for two hours, did the agents state exactly what they were investigating. At one point, Jeff Ruch, the executive director of PEER (as well as an attorney and an observer of the investigation), asked about the allegations. May responded, “Well, the scientif-—well, scientific misconduct, basically, uh, wrong numbers, uh, miscalculations, uh—.”

“The level of criticism that they seem to have leveled here, scientific misconduct, uh, suggests that we did something deliberately to deceive or to, to change it,” Monnett replied. “I sure don’t see any indication of that in what you’re asking me about.”

“No, no, no further comment on my part,” May said. May also admitted that he had no background in science when Monnett asked about his qualifications to investigate the matter.

According to PEER, the agents then seized Monnett’s computer hard drive, notebooks, and other materials. Monnett says he did not receive any further substantial information about the investigation until June, when May asked to set up a follow-up interview. But before that interview could take place, on July 18, Monnett received notice from BOEMRE’s deputy regional director for Alaska that he had been placed on administrative leave “effective immediately” and “pending the final results” of the inspector general’s investigation. He was not to enter his office, speak to colleagues, or continue any of his scientific work.

And here’s where things get really weird: Despite the line of questioning in the February interview, BOEMRE spokesman Melissa Schwartz told  Mother Jones that his suspension has “nothing to do with scientific integrity, his 2006 journal article, or issues related to permitting, as has been alleged.”

On July 28, PEER filed a complaint with the Department of the Interior alleging that BOEMRE violated the new scientific-integrity policy adopted by the DOI last year in its dealings with Monnett. And PEER executive director Jeff Ruch believes that there may be something more sinister at play in the investigation; he argues that Monnett’s ouster is “a political attempt to interfere with science.” BOEMRE, which is changed with overseeing oil and gas development in the region, is currently considering an application from Shell to drill in the Beaufort Sea, where Monnett saw the dead bears. There have been heated debates between the DOI, enviros, and the oil and gas industry about whether the bears should be granted endangered species protection—which could make it more difficult to drill there.

Indeed, during his interview with inspector-general agents, Monnett said that after the paper was published, he faced backlash from an agency that was focused on drilling in the region above all else. “They don’t want any impediment to, you know, what they view as their mission, which is to, you know, drill wells up there,” he said. Monnett also said that he and his colleagues were “blasted” by their BOEMRE superiors when the paper was released and told that they weren’t to speak about the findings publicly.

According to PEER’s complaint, in addition to coordinating “a significant portion of all BOEM extramural research and a majority of BOEM research on Arctic wildlife and ecology,” Monnett oversees $50 million in scientific studies from the agency in his role as a contracting officer’s representative. Agency officials “have actively persecuted Dr. Monnett, acted on hearsay and rumors, gratuitously tarnished his reputation, and substantially disrupted important scientific research.” Monnett, PEER’s Ruch wrote, has been “subjected to a Star Chamber procedure where he does not know what allegations have been made, yet is being treated as guilty.”

On Thursday, in response to a request for comment, BOEMRE’s Schwartz wrote: “All of the scientific contracts previously managed by Mr. Monnett are being managed by the highly qualified scientists at BOEMRE. Any allegations regarding scientific integrity would be addressed through the Department’s new scientific integrity policy. The investigation is being handled by the Department’s Office of the Inspector General.”

This isn’t the first time that this office of MMS/BOEMRE has been criticized for its handling of scientific-integrity concerns. BOEMRE was created in the wake of the BP spill last year as a successor to MMS, a scandal-plagued agency that had been criticized for being too close to the industries it was supposed to be regulating. A report from the Government Accountability Office issued in April 2010 specifically targeted the Alaska regional office of MMS for a lack of transparency and adherence to scientific integrity.

If the basis for the allegations is, in fact, the polar bear paper, it would come as a surprise to most researchers working on the subject. In the five years since the paper was published, a number of other researchers have made similar observations. Just last week, a biologist from the US Geological Survey presented a study on long-distance swims and mortality among female polar bears and their cubs at a meeting of the International Bear in Ottawa. Steve Amstrup, a senior scientist with Polar Bears International and previously the chief scientist working on polar bears for the USGS’s Anchorage office, said that the observations of Monnett and his colleagues were well documented.

“There is no question that the sea ice has retreated and that has resulted in polar bears facing much longer stretches of open water that they have to swim across,” Amstrup said. “When you take that critical habitat away, that’s going to have detrimental effects on the bears.”