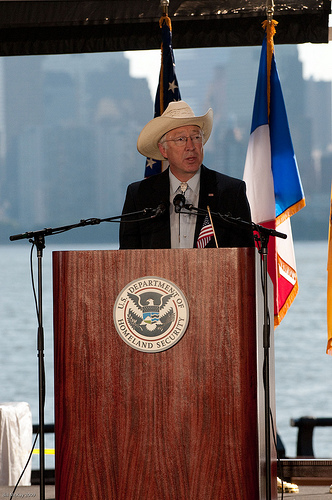 While executives from the companies responsible for the Deepwater Horizon rig spill were being grilled by the Senate, Secretary of Interior Ken Salazar laid out a plan to overhaul the beleaguered agency whose failures might have been at the root of the disaster.

Salazar called on Congress to split the Minerals Management Service (MMS), the division of the Department of Interior that oversees oil and gas drilling, into two agencies. One agency would handle collection of royalties from oil and gas production, while the other would be charged with safety and environmental regulation. The plan also calls for expanding the current 30-day environmental and safety review period for exploration plans to 90 days.

The long-standing criticism of the agency has only intensified in recent days as evidence emerged that MMS was still waiving environmental review of offshore development.

Sen. Maria Cantwell (D-Wash.) accused MMS and the oil industry of having “too cozy a relationship” at Tuesday’s hearing on the Gulf spill. Bill Nelson, the Florida Democrat leading the attack on the agency, accused it of “a sorry record, a record of incestuous relationships, of sex parties, pot parties.” “MMS needs to clearly be cleaned up,” Nelson added.

More on the proposed MMS split at Post Carbon.