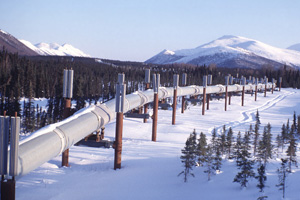 The next big offshore oil disaster could take place in the remote Arctic seas where hurricane-force winds, 30-foot seas, sub-zero temperatures, and winter darkness would overwhelm any clean-up attempts, a new report warns.

With the ban on offshore drilling lifted in the Gulf of Mexico, big oil companies such as Royal Dutch Shell are pressing hard for the Obama administration to grant final approval to Arctic drilling. Shell has invested more than $2 billion to drill off Alaska’s north coast, and is campaigning to begin next summer.

But the report, Oil Spill Prevention and Response in the US Arctic Ocean, by the Pew Environment Group, warns that oil companies are not ready to deal with a spill, despite the lessons of the BP disaster in the Gulf of Mexico.

“There is a lot of pressure by Shell to drill this summer,” Marilyn Heiman, director of the US Arctic program at Pew said. “But the oil companies are just not prepared for the Arctic. The spill plans are thoroughly inadequate.”

It took BP three months to bring its ruptured well under control. The former chief executive, Tony Hayward, admitted this week that the company had to improvise its response plan as it went along.

Trying to clean up a spill in the extreme conditions of the Arctic would be on an entirely different order of magnitude. “The risks, difficulties, and unknowns of oil exploration in the Arctic…are far greater than in any other area,” the report said.

The consequences for the Arctic’s environment would be dire, it said, wiping out populations of walrus, seal and polar bear and destroying the isolated indigenous communities that depend on hunting to survive.

Getting to the scene of a spill would be a challenge. The nearest major port, Dutch Harbor, is 1,300 nautical miles away from the drilling areas in the Chukchi and Beaufort seas, and what few air landing strips exist are not connected to any road system. There are no coast guard vessels in either sea, and the nearest coast guard station is 950 miles by air away in Kodiak, Alaska.

Response teams would confront gale-force winds, massive blocks of ice and turbulent seas, total darkness for six weeks of the year, and extreme cold. Cranes would freeze and chemical dispersants, such as those used to break up the BP spill, might not work.

Then there is the ice. Left undetected, a pipeline leak could spread oil beneath the surface of sea ice. Ice floes could carry oil hundreds of miles away from the source. At freeze-up, oil can become trapped within ice within the space of four hours, remaining there until spring. If it becomes trapped within multi-year ice, oil could stay in the environment for years, or even a decade, the report said.

Pew and other environment groups this week ramped up their campaigns on offshore drilling, taking out full-page advertisements in gulf newspapers calling on the Senate to pass tougher offshore drilling regulations when it returns for its lame-duck session next week.

An oil spill bill passed in the house last summer, but has stalled in the Senate amid strong objection from the oil industry to provisions that would lift the current $75m cap on liability.

There is also increasing concern that the interior secretary, Ken Salazar, will lift the hold placed on Arctic drilling permits after the oil disaster in the gulf.

The report does not call for a complete ban on Arctic drilling, but it recommends far more extensive study of the potential environmental impacts of a spill before industry is allowed to go-ahead. “We need to take a surgical approach and see what areas should and should not be allowed,” said Heiman.

The report also says that any spill response has to be tailored to the extreme Arctic conditions, and that oil companies be required to real-life test runs of their containment efforts.

“We can’t be training them the moment the oil hits the water and the ground like we did in the Gulf,” Heiman said. “There is much more work that needs to be done to protect the Arctic.”