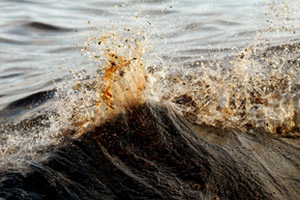 There’s just one facility in the world where scientists and emergency responders can run full-scale oil spill response tests and research. It’s housed at US Naval Weapons Station Earle in Leonardo, New Jersey. But when Sen. Robert Menendez (D-NJ) tried to arrange a visit to the facility earlier this week, he learned that the facility is presently inoperable. Why? The tank researchers use to simulate spills has sprung a leak.

The Oil and Hazardous Materials Simulated Environmental Test Tank (OHMSETT) is owned by the Minerals Management Service (recently renamed the “Bureau of Ocean Energy Management, Regulation, and Enforcement”). The wave pool there, which is used to test oil spill response technologies and techniques, was closed last month “because of multiple leaks” and is expected to remain out of commission until sometime in July.

Menendez, a major opponent of offshore drilling, says the situation demonstrates just how unprepared the federal government is to handle an oil disaster like the one in the Gulf. “I believe that the fact that this facility is inoperable during the nation’s largest oil spill is indicative of a complacency and lack of investment in oil spill response technologies,” he wrote in a letter to Interior Secretary Ken Salazar on Monday. “The industry and even the government has substantially invested in new technologies to drill in deeper water and deeper into the Earth, but little has been invested in safety or oil spill response and clean-up.”

The Department of Interior issued this response today, arguing that maintenance on the tank was planned and that the Coast Guard doesn’t need to use the facility right now because they are “too busy with the response” in the Gulf. Here’s the full statement:

OHMSETT is currently closed to testing because of planned maintenance. Prior to the closure, BOE consulted with the USCG to see if they needed the tank after the Deepwater Horizon incident and they said that they were too busy with the response. No testing was delayed or postponed due to the planned closure. The tests normally conducted at the facility are scheduled months in advance and are more oriented to advancing research and development than to addressing current issues.

If the research is promising, it can and often is developed into procedures or equipment used to deal with real-world events. We also have the ability to bring the facility back on line in several days if the tank is needed for testing to help the spill response effort.

Even though it was inoperable at the time, Sharon Buffington, chief of the engineering and research branch of MMS, touted the tank as “a vital component” of MMS’ oil spill research in testimony to a House panel on June 9. “It is the only facility in the world that allows for full-scale oil spill response testing, training, and research conducted with a variety of oils in a marine environment under controlled conditions,” Buffington told a House panel. Now-dismissed MMS head Liz Birnbaum also talked up it at a hearing last month as integral to “ensure that the best and safest technologies are used in offshore oil and gas operations.” Neither Birnbaum or Buffington mentioned that the facilty was offline.

Menendez, who is sponsoring an MMS reform bill in the Senate, says this is yet another example of why the divsion needs an overhaul.

“The need for the MMS reform could not be clearer when the agency charged with preventing Big Oil from spilling into our waters cannot keep water in its own testing tanks,” Menendez tells Mother Jones.

Seems like the hole in the bottom of the Gulf isn’t the only one we should be worrying about.