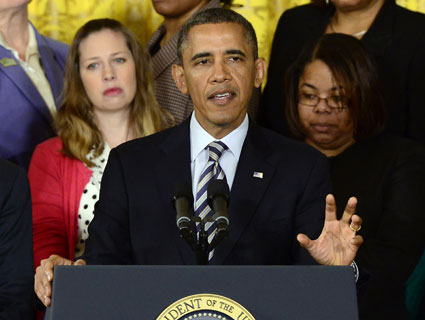 President Obama speaks out for gun control reforms at the White House in March surrounded by mothers victimized by gun violence.Prensa Internacional/ZUMAPRESS.com

On Monday evening, four days after Connecticut Gov. Dannel Malloy signed some of the nation’s toughest gun control measures into law, and on the day that Democrats began debating discussing their gun control reform package on the Senate floor, President Barack Obama gave an impassioned speech at the University of Hartford urging a vote on measures that would expand background checks, renew the assault weapons ban, and ban magazines holding more than 10 rounds. “All of them are common-sense,” Obama said. “All of them deserve a vote.”

Meanwhile, 11 more Republicans, including Senate Minority Leader Mitch McConnell, have threatened to join Sens. Rand Paul, Ted Cruz, and Mike Lee in a filibuster to “oppose any legislation that would infringe on the American people’s constitutional right to bear arms, or their ability to exercise this right without being subjected to government surveillance” (PDF). Although Senate Majority Leader Harry Reid has promised a vote on the assault-weapon and high-capacity magazine bans, they stand no chance of passage and are off the table entirely in bipartisan compromise talks.

Polling by news organizations and Michael Bloomberg’s Mayors Against Illegal Guns has indicated an overwhelming public support for universal background checks. But for Senate Republicans, the devil’s in the details: Most have balked at a proposal to require record-keeping on sales by private sellers, arguing that it would lead to a national registry of gun owners. In reality, the proposal would not change the existing law that requires government records for commercial sales to be destroyed within 24 hours.

Ladd Everitt, a spokesman for the Coalition to Prevent Gun Violence, dismisses concerns about record-keeping as a “conspiracy theory.” Still, he says, gun control groups expect Republican senators to make good on their filibuster threat and says there is an effort underway to rally victims of gun violence and other supporters of gun control* to “filibuster the filibuster” by reading the names of gun violence victims since Newtown if Republicans do.

Sen. Joe Manchin, a West Virginia Democrat and member of the National Rifle Association, is continuing to negotiate with Republicans including Pennsylvania Sen. Pat Toomey to support a compromise bill that would require background checks for private sales at gun shows and on the internet but would exempt sales between family members and temporary transfers between gun owners with hunting licenses. Efforts to expand record-keeping to private sales, however, have stalled talks with Sen. Tom Coburn (R-Okla.), whom Democrats view as another potential cosponsor of bipartisan legislation. Sen. John McCain (R-Ariz.) has yet to take sides, but in the past has supported state laws requiring background checks at gun shows and last weekend implored his colleagues to drop their filibuster threat and allow a vote.

At Hartford, Obama called the filibuster threat a “political stunt” and echoed many of the same themes from his White House speech in late March alongside mothers affected by gun violence. He was introduced by the parents of Dylan Hockley, one of 20 first graders killed at Sandy Hook Elementary in December, and said he was as “determined as ever” to honor the victims by passing new gun control legislation.

“If you’re an American who wants to do something to prevent more families from knowing the immeasurable anguish that these families know, now is the time to act,” Obama said.

Correction: This story previously stated that gun control groups were asking Senate Democrats to read names of gun violence victims. There is no plan to do that.