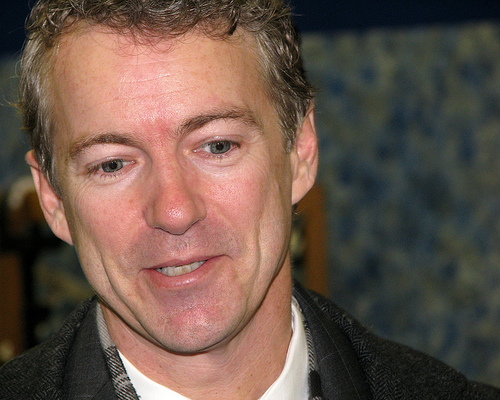 Fresh off his 13-hour drone-protesting filibuster of John Brennan’s nomination as CIA director, Sen. Rand Paul (R-Ky.) is threatening to do the same with the Senate’s soon-to-be-debated gun control package, Politico reports. In a letter to Majority Leader Harry Reid (D-Nev.), co-authored by fellow Brennan-blocking senators Ted Cruz (R-Texas) and Mike Lee (R-Utah), Paul wrote, “We will oppose the motion to proceed to any legislation that will serve as a vehicle for any additional gun restrictions.”

Paul’s main gripe appears to be provisions drawn from Sen. Dianne Feinstein’s (D-Calif.) proposed assault weapons ban, which passed the Senate Judiciary Committee on a party-line vote but was dropped from the initial gun control package that is expected to get a vote in early April. Reid has promised to allow Feinstein’s proposals—which include a ban on 157 specific models of assault weapons as well as magazines of more than 10 rounds—to be voted on as amendments.

Though they don’t use the word “filibuster” in the letter, the conservatives are leaving no doubt that they would filibuster on an initial procedural question—the motion to proceed.

Lee staged a test vote on the issue during consideration of the Senate budget last week. He tried to amend a point of order against gun control legislation to the budget but fell short. It needed a three-fifths supermajority and failed 50-49, needing 60 votes to pass. But the final tally emboldened Lee, Paul and Cruz because they were so close to a majority and a filibuster takes just 41 votes to sustain.

Even if Rand and his colleagues drop the filibuster threat and the assault weapons ban does manage to make it into the package, it will stand little chance of passing in the Republican-controlled House. Most gun control advocates now consider a bipartisan expansion of background checks as their best opportunity for reforming gun laws.