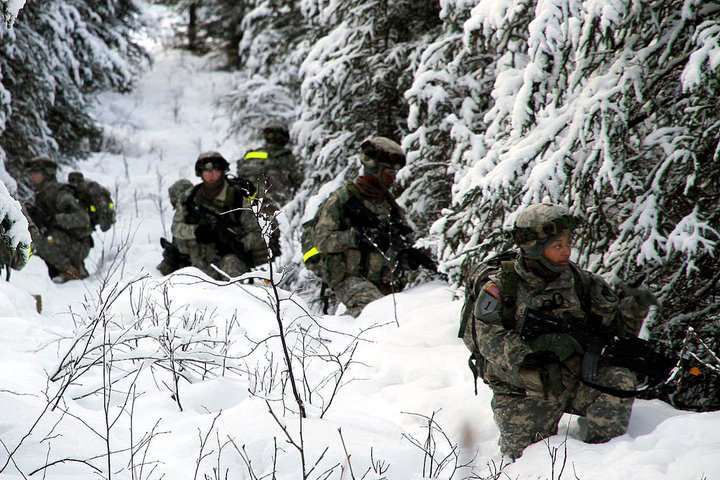 Federal authorities have arrested a 22-year-old soldier from Kentucky on unspecified charges of espionage. Spc. William Colton Millay, a military police officer, was picked up in late October on his base in Alaska, Reuters reports. The arrest conjures up memories of another young soldier, Pfc. Bradley Manning, who’s spent years in custody accused of passing a trove of classified documents about the wars in Iraq and Afghanistan to WikiLeaks. Thus far, the Army and the FBI insist that Millay’s case is unrelated to those leaks. “This has nothing to do with WikiLeaks,” an FBI spokesman told an Anchorage, Alaska, newspaper. That report also reveals that Millay’s unit, the 164th Military Police Company, recently embarked on a difficult war deployment:

Most of that 170-member MP company, the “Arctic Enforcers,” left in March for a 12-month deployment to Afghanistan, mainly to train police there. The company lost four soldiers in a roadside bomb attack in Laghman Province in June.

The accompanying photo shows soldiers from Millay’s unit training in Alaska for their deployment to Afghanistan back in January. An Army spokesman made it clear to Reuters that Millay had not joined the company downrange, though: “He was part of the rear detachment,” the spokesman said. “I don’t know why in his particular case he was part of that (rear deployment) but that’s not unusual.”

Nevertheless, Millay’s arrest could be related to information he had access to regarding that deployment. Mother Jones is investigating the case and will provide updates as they come.

UPDATE 1: Army Times interviews with friends of Millay’s from his Owensboro, Ky., hometown, deepen the mystery surrounding his charges and possible motivation:

Friends from Millay’s hometown were “shocked” to hear of his arrest and said the charges were uncharacteristic of Millay. One friend, Janssen Payne, said Millay is “as loyal to his country as he is to his best friends.”

Payne said Millay’s brother was a soldier and that Millay was a supporter of the wars and then-President George W. Bush when the two of them were in high school.

“He was really patriotic and really loved his country,” Payne said.

UPDATE 2: Millay’s unit, the 164th Military Police Company, is currently in the middle of a deployment at Forward Operating Base Mehtar Lam, a modest outpost in the restive East Central Afghanistan region. The tour’s taken its toll: Rod Nordland of the New York Times last June wrote a riveting profile of some of the unit’s women, which detailed the gripping attacks and fatalities the company has sustained.

YouTube has a video, shown below, of the 164th’s soldiers preparing last winter for their Afghanistan deployment; Millay does not appear in it. But one soldier, Spc. Timothy Moon, said on the video that the company members knew each other inside out: “We’ve been an organic team for quite a while so we know each other we don’t have to really talk too much when it comes to getting ready for a mission, ’cause we know what each other’s jobs are and what’s gonna get done.”

This is a video of the 164th’s Afghanistan base both from the air and on the ground, taken a few years back. Mother Jones is investigating whether Millay’s knowledge of unit operations there may be related to the allegations against him: